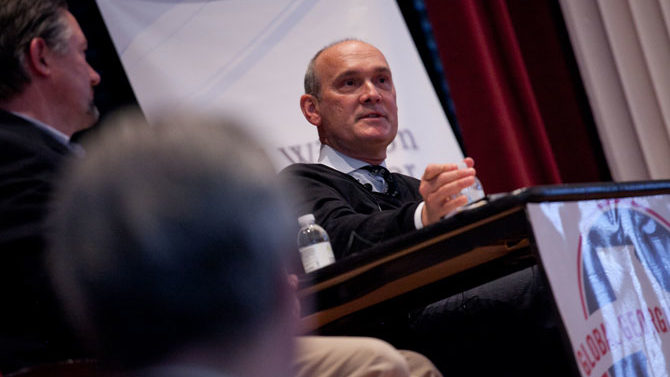 Welcome to Behind the Scene, a monthly series where Flagpole and DTproductions  profile the people who work offstage to make Athens music matter.

WHO HE IS: Bertis Downs

WHAT HE DOES: Lawyer and manager, R.E.M.

The volume isn’t as much. We’re not making records anymore. We’re not going on tour anymore. There are still some side things going on… We just put out this “MTV Unplugged“… We’re doing some 25th anniversary [reissues], the golden anniversary, for some of our records. The last one we just put out was Green. The next one we will put out, which will be in two years, is Out of Time. When it’s 25 years on the calendar, it’s time to do an extra disc. We’re still busy, but not with the same intensity.

ON BILL BERRY LEAVING THE BAND:

Bill decided that he really wasn’t [into it]… I believe it was Halloween of ’97. He decided a while before that and talked to the band members individually. Obviously, it was his news. I felt mixed emotions about it. I felt sad… [But] the other guys already had a whole record written. A lot of songs for Up were in the works, and they were going into it with a new producer, Pat McCarthy, [in] San Francisco. They carried on, as Michael said. He had a good quote at the time: “We’ll see if a three-legged dog can run.” And it did—it ran for quite a while. But it was different.

He had a good quote at the time: “We’ll see if a three-legged dog can run.” And it did—it ran for quite a while.

ON SUCCESS IN MUSIC:

Depending what [your] goals are, it might be a success just to know you’re making the music that you want to make. I think R.E.M. always considered themselves a success because they liked what they were making as a unit. They liked the stuff that they were coming up with… A lot of people would say that there’s a dividing line of, when you’re able to quit your day job, when you’re able to do [music] as the sustaining economic fact of life as opposed to doing it on the side as a hobby.

I run the other way when people say “education reform,” because unfortunately that term has been taken by people who I don’t believe are really helping our schools. I think they’re actually hurting our schools, and I think they’re particularly hurting our teachers, which is why so many of them are leaving. So, I’ve gotten really involved in the issues to advocate in favor of good schools for all kids—not just the ones lucky enough to get cherry-picked into some program or some sort of lifeboat.

I’m really interested in, system-wide, a whole district, a whole school where every kid has a chance to succeed. Every kid has a good teacher. Every kid is being taught in a class small enough with adequate facilities with a rich and varied curriculum. Those are the issues that, I think, are pretty fundamental. Those are the kinds of schools I went to when I was a kid. I feel like they’re kind of a dying breed right now.