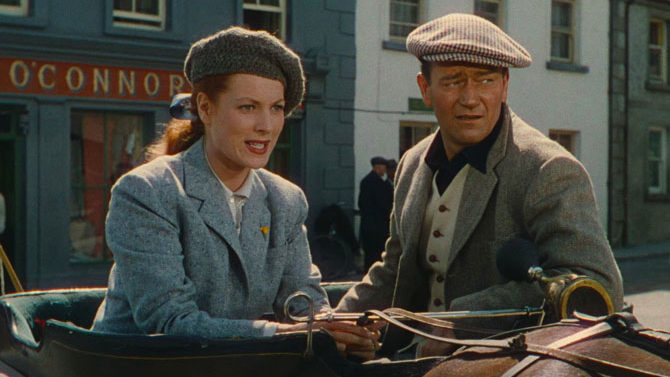 In his biography Print the Legend: The Life and Times of John Ford, Scott Eyman describes the legendary American director’s persona as that of “a hardworking commercial carpenter who just happened to work in the movie business.” This workmanlike dedication to the cinematic craft led Ford to direct over 140 movies—including a large swath of lost silent films—between 1917–1970, setting a still-standing record with four Academy Awards for Best Director.

Athenians can see Ford’s work on the big screen Mar. 11 and 14 when The Quiet Man—the final film to win him an Oscar—screens at Beechwood. To experience the filmmaker at his very best, check out The Man Who Shot Liberty Valance at home.

THE QUIET MAN (1952) Based on the eponymous short story by Maurice Walsh, this tale set in a small Irish village arrives at Beechwood just in time for St. Patrick’s Day. John Wayne plays Sean Thornton, an American from Pittsburgh who arrives in the fictional town of Innisfree with a dark secret in his past. He almost immediately falls in love with plucky redhead Mary Kate Danaher (Maureen O’Hara, in the second of five collaborations with Wayne). However, her brother, “Red” Danaher (Victor McLaglen), objects to their courtship and refuses to pay a dowry once they get married. This refusal sets husband and brother on a collision course.

Ireland held a powerful sway over Ford’s imagination throughout his life. Despite being born John Martin Feeney in Maine in 1894, the director, who was known to embellish his back story, often claimed he was born Sean Aloysius O’Fearna to foster a stronger connection to his ancestors’ homeland. Every single frame of The Quiet Man positively drips with his reverence for the Emerald Isle. Winton C. Hoch’s Oscar-winning cinematography portrays lush green fields sandwiched by brilliant blue sky and water. Ford’s films are known for their gorgeous landscape photography, and The Quiet Man’s visuals provide a welcome respite from the typical deserts and prairies of his Westerns.

Unfortunately, the breathtaking cinematography is in service of a problematic message. The lack of a dowry causes Mary Kate to lose confidence in Thornton, who doesn’t understand why the 350 pounds is so important to her. His confusion is chalked up to cultural differences, so Ford plays Thornton finally deciding to confront Red as a moment of embracing his new culture. However, this confrontation involves physically dragging his wife across five miles of country terrain to have a seven-minute fist fight with her brother. The film suggests that true masculinity stems from embracing primal brutality. While boasting images of timeless beauty, the morality at play in The Quiet Man is as outdated as it is repulsive.

THE MAN WHO SHOT LIBERTY VALANCE (1962) Ten years after The Quiet Man, Ford released a Western noir that offers a much different, more nuanced take on violence and masculinity. Told in a flashback, the black-and-white film follows young lawyer Ranse Stoddard (Jimmy Stewart) as he arrives in Shinbone, a desert town menaced by an outlaw named Liberty Valance (Lee Marvin). Seeking to bring Valance to justice, Stoddard enlists the aid of rancher Tom Doniphon (Wayne), who is also his rival for the affections of waitress Hallie Ericson (Vera Miles).

After decades of directing Hollywood’s most successful Westerns, Ford used The Man Who Shot Liberty Valance to probe the myth and symbolism of the genre, particularly the trope of the masculine gunslinger. While the cool, confident Doniphon is a crack shot unafraid to use violence to achieve his ends, the townsfolk respect Stoddard’s intelligence but disregard his championing of the law over physical confrontation. (Stewart’s typical wide-eyed idealist schtick makes him perfect in this role.) Since this is a noir, the relative innocent is destined to be tempted by a darker path, and Stoddard accordingly starts target practice after suffering too many humiliations at the hands of Valance. As the lawyer walks down the path that leads to the titular shooting, the townsfolk start to more fully embrace him, leading him to heights of acclaim and political power.

Ford wisely follows Stoddard’s ascent with an ending that calls his accomplishments into question, asking the audience to consider whether respect based on violence is well-placed. The Man Who Shot Liberty Valance is ultimately more engaging than The Quiet Man for the questions it asks, rather than the vicious solutions it proposes.