Pair Jorge Torres-Torres’ Revision of the Planet of the Apes With a George A. Romero Classic 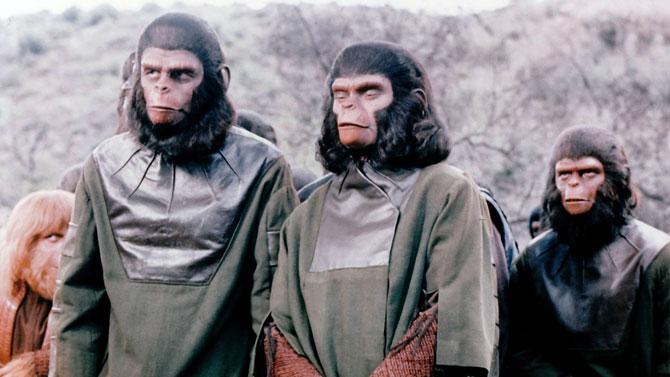 After condensing the entirety of the Phantasm horror series in Phantasm Revision last year, Athens native Jorge Torres-Torres is at it again. On Wednesday, Apr. 18, he returns to Flicker Theatre & Bar to screen his own double feature of abridged film series. Revision of the Planet of the Apes and Evil Dead Revision collapse their respective franchises into efficient, coherent and downright fun CliffsNotes versions.

Torres-Torres’ Planet of the Apes edit successfully achieves the considerable challenges of culling 486 minutes down to a sleek 80-minute run time. For another tale of murderous monkeys rising up against their human oppressors, chase the revision with Night of the Living Dead director George A. Romero’s 1988 thriller Monkey Shines.

REVISION OF THE PLANET OF THE APES (2018) In his Planet of the Apes edit, Torres-Torres wisely eschews the wooden Tim Burton remake from 2001 and the recent trilogy, whose slick CGI character work sets it apart from the series’ typical milieu of men in monkey costumes. He focuses on the classic series of five films, which are ripe for the type of omnibus that Torres-Torres has turned into an art form. The original run comprises a multigenerational saga of the moral and evolutionary failure of humans giving rise to an ape-run society, and the filmmaker’s meticulously crafted edit concisely surfaces and highlights the themes that run throughout this epic.

While the original films follow a twisted timeline that starts millenia in the future, jumps back to the 1970s and progresses from there, Torres-Torres avoids the temptation to straighten it all into a linear chronology à la the TV miniseries “The Godfather Saga.” Instead, he finds new ways to twist the events of the series into a unique package. We more-or-less start with the events of the third film, which sees chimpanzee scientists Cornelius (Roddy McDowall) and Zira (Kim Hunter) travel to the present day to flee nuclear destruction. Contemporary audiences watching Revision are introduced to the idea of a world full of talking apes and human slaves at the same time as the contemporary human characters that suspiciously greet Cornelius and Zira upon their arrival. Coupled with an ending that rearranges the events of the series in a way that suggests calamity, Torres-Torres amplifies the original films’ pessimism regarding the human race’s general inability to keep itself alive.

Any tension or discomfort this device may yield is neutralized by the edit’s clever humor. The patchwork nature of Torres-Torres’ revisions allows his Apes edit to become a triumph of intertextuality, summoning visuals and audio from pop culture ephemera surrounding the films. The 1975 animated series “Return to the Planet of the Apes” makes several appearances, perhaps inspiring the cartoon sound effects overlaid over characters’ pratfalls. Musical cues like George Michael’s “Monkey” add an energy and joy to the series’ fairly rote fight scenes. I will not spoil the edit’s greatest musical appropriation, drawn from the most well-known television reference to Planet of the Apes and deployed at a time when it’s least expected. These comical touches temper what could have become a graceless exposition dump in the hands of a lesser editor.

MONKEY SHINES (1988) Zombie maestro Romero’s first studio film marries his horror sensibilities with a uniquely weird plot. The generically handsome Allan (Jason Beghe) is paralyzed after being struck by a truck. To boost the spirits of his depressed best friend, scientist Geoffrey (John Pankow of “Mad About You”) gives Allan a helper monkey named Ella from his lab. However, Geoffrey fails to mention that Ella has been the subject of a scientific experiment that sought to enhance her intelligence with injections of human brain matter. Through the wonders of pseudoscience, Allan and Ella develop a psychic bond that turns the adorable capuchin into a relentless killer hell-bent on punishing her master’s enemies.

Monkey Shines makes for such a satisfying double feature with Revision of the Planet of the Apes because both boast masterful editing. The cutting in Monkey Shines needs to be particularly smart in order to showcase a lead performance from an animal actor. Stretches of the plot are driven by Ella’s actions, which are often too complex for a monkey to reliably execute in a single take. Romero solves this problem by isolating several distinct actions in individual shots that are then strung together into a sequence displaying a complicated agenda on the monkey’s part.

For example, bonding between master and pet earlier in the film involves Ella performing several tasks for her owner before sitting in his lap and smiling. Romero presents each task in a single shot, which means that the monkey only needs to execute one action at a time, instead of a complex chain of actions. With the help of editor Pasquale Buba, the director crafts an antagonist convincingly capable of executing evil schemes, making Monkey Shines succeed as a horror film despite a ludicrous premise.