Add These Contemporary Holiday Classics to Your Queue 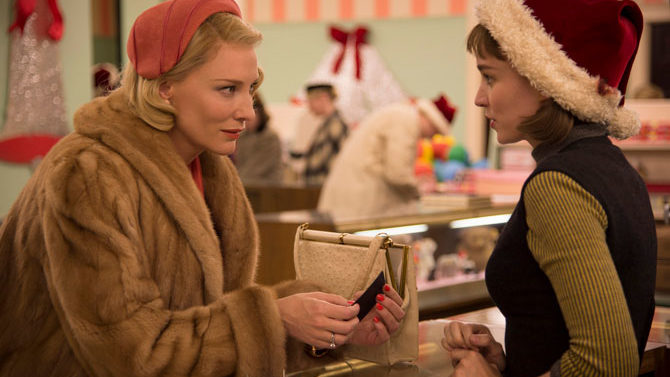 When it comes to Christmas cinema, most available selections belong to a distinct canon. For instance, both Ciné and Beechwood will screen It’s a Wonderful Life this month. If you don’t want to leave the confines of your home, A Christmas Story will likely be looping on cable over the course of 24 hours at one point. And if you want to head in a more adult direction, Die Hard—which you can catch at Beechwood on Dec. 31 and Jan. 3—will take you on a wintertime trip to Nakatomi Plaza.

While these are all solid movies and commendable uses of your film-watching time, wouldn’t it be nice to shake it up with some quality holiday mirth from this millennium? Check out these three contemporary films that spread the Christmas spirit in their own subversive ways.

CAROL (2015) The Yuletide setting of Todd Haynes’ 2015 romance provides an excuse for beautiful 35-mm photography from cinematographer Ed Lachman. Married mother-of-one Carol and young photographer Therese, respectively played by Cate Blanchett and Rooney Mara—both were nominated for Academy Awards—fall in love in a series of beautiful tableaus resounding with nostalgia.

In particular, the tones of Christmas suffuse each frame; deep crimson lurks in restaurant booths, Santa hats and more, and seafoam-green walls provide the backdrop to many scenes. Images are also composed with gauzy pastels reminiscent of those found in colorized versions of black-and-white holiday classics. These hues and the post-World War II department store setting where Carol and Therese meet-cute recall the holiday classic Miracle on 34th Street. The compositions steep the lovers’ taboo-at-the-time romance in Christmas tradition, creating a fascinating visual contradiction.

With Carol, Haynes makes an effective case for the power of love. The women don’t need the divine intervention of It’s a Wonderful Life to overcome the obstacles and people trying to keep them apart. Their instant attraction and powerful bond are strong enough to shatter unspoken rules of conduct and ultimately change their lives for the better.

TANGERINE (2015) Before directing current awards-season darling The Florida Project, filmmaker Sean Baker contributed to the new Christmas canon with the story of two transgender prostitutes roaming the streets of Los Angeles on Christmas Eve. Like Carol, Tangerine also has a distinctive look, but its cinematography—which Baker and Radium Cheung recorded with three iPhone 5s smartphones—is far from traditional.

The film does a lot with very little, pulling sunbursts of warm, saturated colors from pedestrian scenery like taco stands, donut shops and shitty motels. While the orange tones saturating every image are not traditional for the season, they—along with a bass-heavy electronic soundtrack—keep the audience riveted to each heel-clicking step Sin-Dee Rella (Kitana Kiki Rodriguez) takes on her first day out of prison.

Tangerine is pure entertainment from start to finish, but Rodriguez’s performance is what ties it all together. Sin-Dee is a human hurricane, interfering in people’s business, stealing their cigarettes and wreaking general havoc across the City of Angels over one busy day. Throughout her chaotic pursuit of unfaithful lover and pimp Chester (James Ransone), Rodriguez conveys an intelligence behind Sin-Dee’s frantically darting eyes. She’s making it up as she goes along, but she’s cunning enough to improv plans that leave us hanging in anticipation of her next move.

BAD SANTA (2003) Like Die Hard, Terry Zwigoff’s Bad Santa fills an outlandishly vulgar slot in the new Christmas canon, buts its profanity stems from sheer human depravity instead of graphic violence. With the involvement of producers Joel and Ethan Coen, the film’s focus on part-time safecracker and all-around degenerate Willie T. Stokes (Billy Bob Thornton) makes perfect sense. In films like Barton Fink, A Serious Man and Inside Llewyn Davis, the Coen Brothers constantly return to the narrative well of misanthropes plagued by ill fortune. As we watch Willie slog through the tedium of life as a mall Santa, the story replays.

The success of this film hinges on Thornton’s dedication to making Willie as unlikable as possible. His commitment is as successful as it is admirable, providing a hearty laugh each time the character discovers a new low in his moral deterioration. Most of his ire is directed at youth; the film’s proceedings are essentially an hour and a half of him verbally abusing children—comedy catnip for those of us who can barely tolerate kids. When Willie’s partner Marcus tells him, “Your soul is dog shit. Every single thing about you is ugly,” he’s describing everything that makes this film a great rewatch every holiday season.