Over the Top and Clean Feature Parent-Child Drama 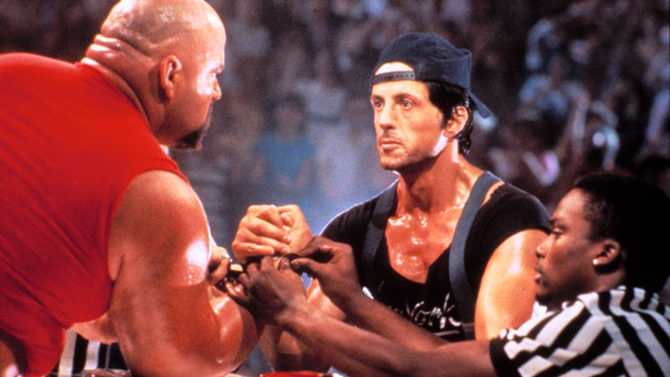 As you pass the time between Mother’s Day and Father’s Day, take in two tales of estranged parents struggling to relate to their children. You can catch the Sylvester Stallone vehicle Over the Top with Roadhouse on Wednesday, May 30 at Flicker Theatre & Bar, and then create a homegrown double feature with Olivier Assayas’ addiction drama Clean at home.

OVER THE TOP (1987) This feature from schlockmeister Menahem Golan focuses on truck driver Lincoln Hawk (Stallone) as he attempts to bond with his military-school-educated son Michael (David Mendenhall) on a trip to Michael’s dying mother’s bedside. Trouble arrives in the form of Michael’s grandfather Jason Cutler (a snarling Robert Loggia), who wants custody of the child. In an ill-defined plan to win back his son, Hawk enters the World Armwrestling Championship in Las Vegas.

Golan’s production company, The Cannon Group—co-owned with cousin Yoram Globus—was known for low-budget productions, and Over the Top is no exception; its $25 million budget paled in comparison to that of Stallone’s following flick, the $60 million Rambo III. Since much of the film portrays bonding between a father and son, Golan subjects us to many scenes of two individuals talking, a particularly boring image that needs to be made compelling by introducing unusual or distorted visuals to the frame. The filmmaker’s lack of resources leads to unremarkable workarounds. Many of the duo’s conversations take place in Hawk’s truck, so the camera captures shots both inside and outside of the cab to switch things up. However, these attempts to create something more than the sum of its parts for as little money as possible largely fall flat, leading to a prosaic first two-thirds of the film.

Visual spectacle kicks into overdrive once Hawk arrives in Las Vegas. Two people sitting across a table from each other, holding hands and occasionally grunting is not a compelling image, but dynamic camerawork makes the final third of the film its most engaging part. As each arm wrestler is introduced by an unseen announcer, we cut to the type of interview format that would be made popular in the following decade via the “confessionals” of MTV’s “The Real World.” Athletes sketch the bare bones of their characters to offer some kind of stakes once the film gets to the matches. And the matches themselves are packed full of lens flares and low-angle shots that make the whole ordeal seem more epic than an event this ridiculous has any right to look. These techniques breathe life and joy into a film whose wooden acting and goofy conceit would otherwise lead it to be forgotten in Golan’s schlock pile of a filmography.

CLEAN (2004) While Over the Top rightfully won two Golden Raspberry awards (Worst Supporting Actor and Worst New Star) for Mendenhall’s snippy, robotic work, Clean star Maggie Cheung took home the Best Actress title at Cannes for her work as recovering junkie Emily Wang. After the overdose death of her rock-star boyfriend Lee, the couple’s son, Jay, goes to live with his father’s parents in Canada. Emily returns to Paris to hold down a job and stay sober long enough to convince the boy’s grandfather, Albrecht (Nick Nolte), to let her be a part of her son’s life.

Subtlety is the key to the success of the film’s two lead performances. Cheung avoids the easy, well-trod path of giving life to an immature, needy character with a showy, loud performance. Instead, Emily moves through her new life quietly devastated, her face permanently fixed in a pensive expression as a series of old friends and in-laws upbraid her for the chaos she brought to their lives. Nolte, who offers an equally rich performance, likewise plays it low-key—an accomplishment, given his bulky 6-foot frame. When Emily and Albrecht have a discussion later in the film about raising Jay, the two actors have a careful, measured exchange that reveals two characters reluctant to admit that they need each other’s help but gradually realizing and accepting that mutual need. Subdued deliveries convey powerful truths, showing that—unlike in Over the Top—a conversation between two individuals can be engrossing when the performers are this talented.