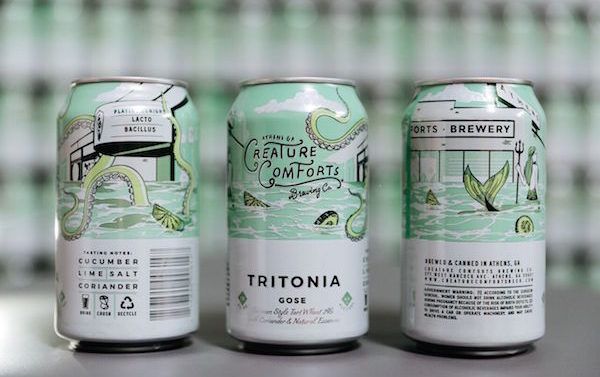 One of Creature Comforts’ most popular seasonal beers, Tritonia, is on shelves and taps this week.

Tritonia (4.5% ABV) is a sour gose-style beer flavored with cucumber, lime, salt and coriander. It’s been hard to come by in years past, but thanks to the opening of Creature Comforts’ second brewery in the Southern Mill development off Oneta Street, the company has upped production this year.

In addition, a small-batch pale ale called Calculating Infinity is available on draft and in cans starting today.

Terrapin has partnered with the Athens Land Trust, which runs the West Broad Market Garden, to start a farmers market on Sundays through June 24. The market runs from 12:30–3:30 p.m. and features four vendors and a produce stand featuring produce from multiple local farms.

Terrapin is also slightly adjusting the name of its West Coast IPA to Up-Hi Five after learning that another brewery produces a beer called Hi-Five that predated Terrapin’s product, although Terrapin was granted a trademark for the name. So Hi-Five fans, be aware that it’s not a new beer, but the same one you love.