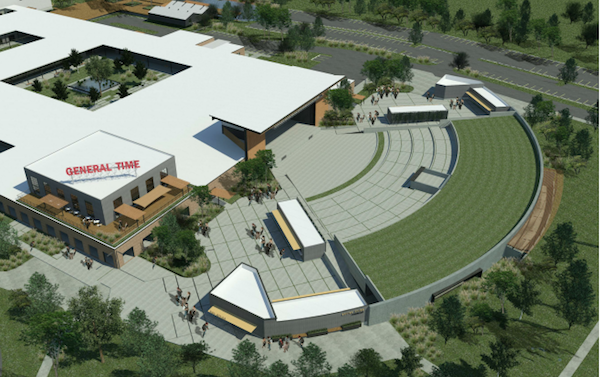 The 35-acre General Time development on the long-vacant Westclox clock factory property off Newton Bridge Road would primarily serve permanent Athens residents as well as draw visitors from around the region, according to promotional materials released Monday.

“This type of adaptive reuse model works so well in countless scenarios in metro Atlanta and around the Southeast,” said Michael Dinerman, who is developing the project along with Jennifer Davidson. “We saw the old Westclox property as an opportunity to help pull together many needs of the Athens community in one strategically located district.”

Plans and renderings—available on the Athens-Clarke County website—show a brewery with a rooftop “tasting terrace,” a “cycle cafe” along a stormwater detention pond and a “provisions market.”

The 3,000-seat music venue reported last Friday would be an outdoor amphitheater that the developers say would host movie nights, beer festivals and other community events in addition to concerts. Dinerman and Davidson said they “consistently heard the echo of ‘amphitheater’ from the community.”

During Phase I, the developers would retrofit the existing 100,000 square-foot warehouse on the property, with Terrapin as the anchor.

The 100-unit residential component “has been carefully designed for an underserved, full-time resident population.”

The entire project would be completed by spring of 2020, assuming it’s approved by the ACC Commission. A rezoning request is on the planning commission’s May 3 agenda; it could make a recommendation as early as June.

The development would include 1,523 parking spaces. Vehicular access would be by Newton Bridge from the north, Chase and Barber streets from the south and the Loop from the east and west. Developers said they expect concert-goers to come early and stay late to eat, drink and shop, spreading out the impact of traffic.

In addition, the plans include a future bike and pedestrian connection to the Sandy Creek Nature Center, the northern endpoint of the North Oconee River Greenway. With construction on greenway and Firefly Trail extensions underway, people would be able to bike to General Time from Winterville or the Eastside as well as downtown and East Athens.

The developers noted that, since Terrapin’s Newton Bridge brewery opened 11 years ago, creative Athens businesses have been moving up the Chase and Barber corridors. “The two streets have the potential to create a new corridor of commerce reflective of Athens’ creative, independent entrepreneurs that will culminate in General Time,” according to the news release.

They said the design was influenced by conversations with UGA Music Business Program Director David Barbe, ACC commissioners, the state and local economic development departments, others in the community, and the Envision Athens plan.