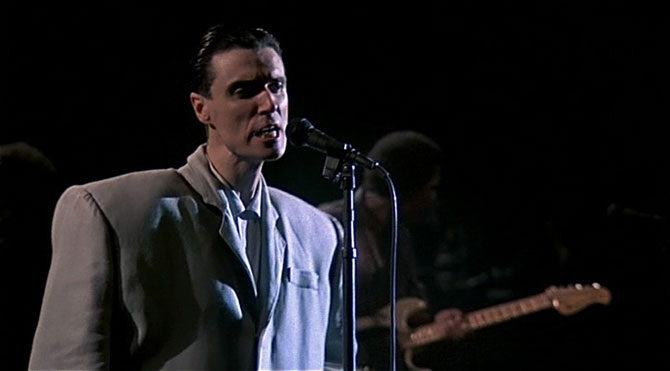 Director Jonathan Demme’s passing in April at age 73 deprived the cinema community of a multitalented icon. While his narrative masterpieces, like The Silence of the Lambs, Philadelphia and Rachel Getting Married, garnered Academy Award attention, his most ingenious creations were his concert films with icons like Talking Heads, Neil Young and Justin Timberlake.

Go Out and Watch:

STOP MAKING SENSE (1984) Although Demme is the man behind the camera in Stop Making Sense, Talking Heads frontman David Byrne was just as strong a creative force in shaping it. With offstage credits including re-recording supervisor and lighting design, Byrne closely influences the film’s look, sound and feel.

Perhaps Byrne’s intimate involvement with the film’s production explains why Demme’s camera is so fixated on him. The musician has the stage persona of a stranger in a strange land, and all of these oddball characteristics—his lankiness, stilted movements and fascination with the mundane—are on full display in the film’s many close-ups. Appearing out of place gives Byrne the leeway to channel characters in his performances that are as different as they are entertaining.

During a performance of “Once in a Lifetime,” he dons thick, black Clark Kent glasses and adopts the mannerisms of a revival preacher, raising his hands in the air and seizing in time to the music. Byrne’s oversized gray suit, the film’s most well-known image, makes its appearance near the end of the movie as he sings “Girlfriend Is Better,” the fabric trembling and quaking with every vibration of the singer’s nervous energy. By sheer virtue of Byrne’s inherent weirdness, he can pivot to embody whichever character best captures the audience’s interest.

Demme’s pacing likewise places Byrne at the focal point of the evening’s action. The film starts with the singer walking onto a bare stage alone to offer a rendition of “Psycho Killer” with acoustic guitar and boombox. As the concert progresses, other band members and their instruments join him on the stage one by one. An entire drum kit is wheeled onstage before drummer Chris Frantz appears for the third song, “Thank You for Sending Me an Angel.” This process continues with bongos, synthesizers and more, until the stage eventually contains all of the instruments necessary for the performance.

With this gradual, modular building of the band, Demme sends a clear message: Talking Heads are a group composed of many interchangeable parts, but Byrne remains the first and most important.

THE LAST WALTZ (1978) Just as Demme posits Byrne as the key onstage creative force in Stop Making Sense, Scorsese does the same for The Band’s Robbie Robertson in The Last Waltz. Most of the film’s interview segments between songs feature the dusky-eyed guitarist waxing philosophical with the ever-chipper Scorsese about making music. This structure led drummer Levon Helm to describe the film in his autobiography This Wheel’s on Fire as a conscious attempt to position Robertson as the de facto leader of the group, and Helm laughed out loud at the interviews’ pomposity at the film’s 1978 premiere.

With squabbles like that, it’s no wonder this Thanksgiving concert at San Francisco’s Winterland Ballroom was The Band’s last. Despite personal beefs, Robertson and Helm—along with bassist Rick Danko, organist Garth Hudson and pianist Richard Manuel—perform at the height of professionalism as they accompany guest musicians like Bob Dylan, Muddy Waters, Eric Clapton and Van Morrison, whom the camera chases around stage as he drunkenly executes high kicks and dips out of the frame.

The excellence of the music is complemented by Scorsese’s excellence in image-making. His always meticulous planning and storyboarding made it possible to shoot in 35mm, supposedly a first for a concert film. This format made possible the use of dynamic sets and lighting cues that gave Scorsese the precise control to create memorable images rarely seen in music movies. During Neil Young’s performance of “Helpless,” Joni Mitchell provides backup vocals from backstage, seen in a right-profile silhouette against a blue background. In this composition, her reedy, wordless keening evokes a feeling of melancholy mirroring the song’s lyrics.

The fact that one scene could bring both this haunting, poignant image as well as several close-ups of Young with a cocaine booger (most visible in the original 35mm print of the film) speaks to the multitudes contained within The Last Waltz, a beautiful document of a weird and wild November evening.