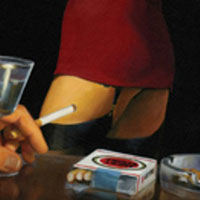 Every one of us has an oubliette in his or her heart, a deep, dark place that most of us keep triple-locked and concealed like the dirty secret it is. Itâ€™s the place where we harbor our most insidious impulses, those things that we dare not do but know that we could, given the right set of circumstances. Itâ€™s the place to which desperation may someday drive us to lie, to cheat, to steal, to kill. Itâ€™s the abyss at which noir fiction grabs us by the scruff of the neck and forces us to stare in horror and fascination. Itâ€™s why noir is even more potent a genre than horror fiction; there are no made-up monsters here, only ourselves.

Because we like our literary heroes in threes (Shakespeare, Marlowe and Jonson; Kerouac, Ginsberg and Burroughs), general consensus has it that there are three giants of the noir crime novel: Raymond Chandler, Dashiell Hammett and James M. Cain. Chandler and Hammett are best known for their private eyesâ€”Chandlerâ€™s Philip Marlowe, Hammettâ€™s Sam Spade and Nick and Nora Charlesâ€”white knights with dirty hands, people with their own particular and flexible codes of honor moving in dangerous circles. Cain, on the other hand, didnâ€™t deal in good guys. His turf was the area immediately surrounding the oubliette, his characters dancing dangerously close to the rim. 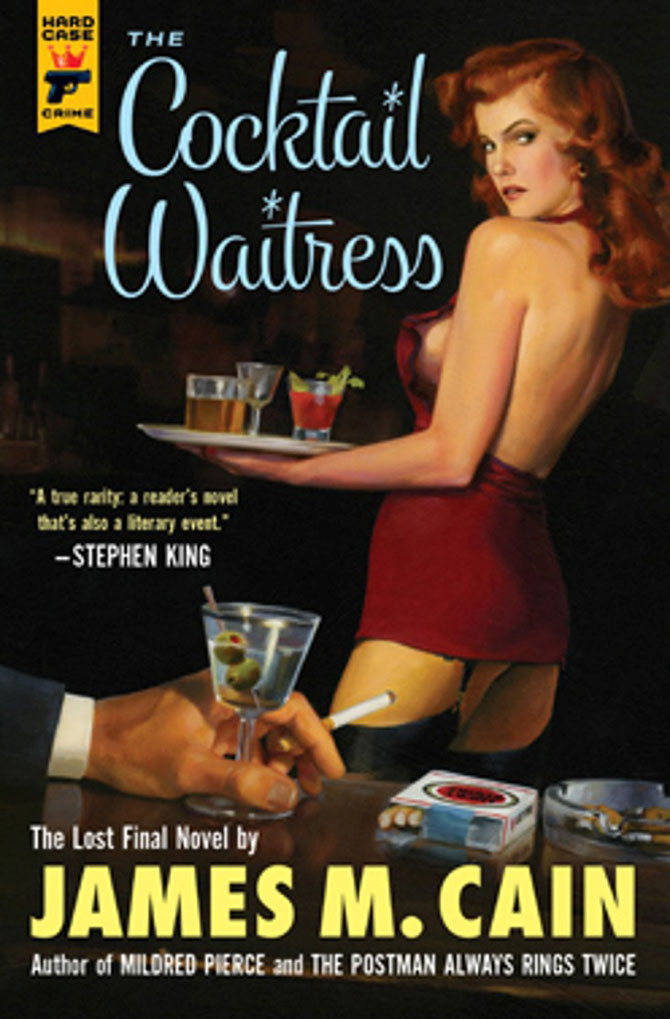 Although James M. Cain wasnâ€™t quite the household name that Chandler or Hammett was, you know his work, or at least the movies made from it. Cain was the author of Mildred Pierce, The Postman Always Rings Twice and arguably the best noir ever written, Double Indemnity. Rather than private eyes and crooked cops, Cainâ€™s specialty was the femme fatale, the good girl gone bad under crushing circumstances, the dame who can play a man for a sap and make him like it. Cainâ€™s beat was the sordid underbelly of the respectable classes. His situations were lurid, his stakes high, and his characters awash in moral ambiguity. He was the father of Jim Thompson and the grandpappy to Donald Westlake, Elmore Leonard and James Ellroy and other modern practitioners of the genre.

That is why itâ€™s a very exciting thing to discover, 35 years after his death in 1977, a new, long-lost novel by Cain called The Cocktail Waitress (Random House, 2012). Charles Ardai, author and co-founder of Random Houseâ€™s terrific hard-boiled imprint Hard Case, retrieved a completed manuscript from 1975, with many pages of revisions, from among Cainâ€™s papers, and edited them into solid shape for release. This is an eventâ€”not as satisfying as it should be, but an event nonetheless.

In the novel, Cain returns to his forte, the good girl in trouble. In this case, said good girl is Joan Medford, the 21-year-old daughter of a Social Register family but disowned after becoming pregnant by and subsequently marrying a drunken lout. After she throws his physically abusive ass out, Joanâ€™s husband plows his car into a culvert wall, leaving Joan widowed and penniless and her son in the care of her sister-in-law Ethel until she can get back on her feet. It doesnâ€™t help that Ethel and a local cop suspect Joan of orchestrating her husbandâ€™s death, nor that the childless Ethel wants to keep the boy for herself. Desperate for money, Joan finds work in a local cocktail bar, slinging drinks in high-cut shorts and a low-cut blouse and fending off advances right and left. A fellow waitress offers her a chance to turn a few tricks on the side, but Joan refuses. Sheâ€™s not that desperate, or is she?

The Cocktail Waitress is well-written, in Cainâ€™s style, unchanged since his heyday. And thatâ€™s what often jars here. There is plenty of sex in this novel, but not to hear the characters tell it. The language is incredibly mannered and laced with roundabout innuendo. Nobody specifically mentions sex, even when itâ€™s going on. While Cain never sets a date for the novel, it is obviously set in the early to mid-1960s, and were it to have come out then, Cainâ€™s delicate control over his charactersâ€™ sensibilities would be appropriate. He wrote the novel in 1975, however, and those 10 years were significantly different in publishing. Cain could have gotten away with more explicit content than ever before, using the language that people used for it back then, even if we pretend that they didnâ€™t. There appears to be no real reason for Cain to have set this novel when he did until the very last page, where his intent is suddenly revealed. Still, knowing just how much mayhem Cain could have worked may interfere with the readerâ€™s immersion in the novel.

Nonetheless, the release of a lost novel by a master like James M. Cain is cause for celebration, and while The Cocktail Waitress is inferior to his greater works, there is something romantic, even heroic, about Cain at the end of his life deciding that he had one more book in him. Heroic sounds right; the man may not have dealt in heroes in his fiction, but to open oneâ€™s oubliette for business one last time takes courage indeed.