Breweries and Brew Pubs Spring Up Here and There 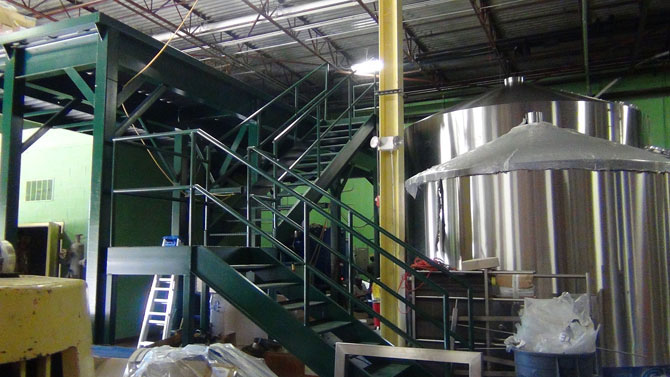 Here I spring forth with a looooong overdue column, this time about all the new craft beers you can look forward to tasting (whether in Athens or Atlanta or elsewhere), as well as a bit about the new breweries that are making them. Do not expect complete information; I have had to rely on websites, word of mouth (swallowing optional), and even some hearsay.

We begin right down the pike. First, Terrapin Beer Co. is debuting a canned beer this summer named Recreation Ale (4.5%), which is a minor formulaic tinkering and repackaging of their Easy Rider. (Wait until my friend D. J. Hack in Osasco, Brasil receives one of those in the mail!)

Downtown, other beery events are occurring. The old Snow Tire Co. location at 297 West Hancock Avenue is morphing into Creature Comforts Brewing, whose initial offerings will be an IPA (India Pale Ale), a Pilsener, and a Berliner Weisse. Look for these to arrive (with their amazing labels) sometime around August.

This is the very beginning, fellow thirsthards. We mosey to Atlanta. Out and about, you may already have noted the striped necktie tap handles of Monday Night Brewing: their products are Drafty Kilt Scotch Ale (7.2%), Eye Patch Ale (6.2%), and Fu Manbrew Belgian-style Wit (5.2%). These are now being contract brewed elsewhere (this is not a bad thing), but before you know it, the brewery will be fully ensconced in their new digs at 670 Trabert Avenue, N/W, over near the Atlanta Water Works on Howell Mill Road.  Check their website for progress.

Orpheus Brewing is searching for a spot near the Beltway (they may have found it by now), where they will brew their Siren Plum Saison, Global Belgian Pale Ale, and Winter IPA (brewed with conifer branches!). They intend to be operant by fall 2013. They also promise a Spring IPA and a Summer IPA; what they will do for fall is pure conjecture.

Eventide Brewing occupies an as-of-yet undisclosed location in the Grant Park area. They plan to specialize in “sessionable” beers (that is, brews of 5 or 6% max), and will release a Kolsch Style Ale, an American Pale Ale, a Hefeweizen, a Dry Irish (“American”) Stout, and the most original Red Headed Hailey Red Ale. Their target debut date is mid-July, just in time for my birthday. Yes!

Over in Decatur, amazing things are springing forth. Wild Heaven’s brewery sits on the city line of Avondale Estates; their brews, Invocation Belgian-style Golden Ale (8.5%), Ode To Mercy Imperial Brown Ale (8.2%), Eschaton Belgian-style Quadrupel Ale (10.5%), and Let There Be Light American Ale (4.8%) have already been released and are being contract brewed for now). As if this isn’t enough, two other Decaturite breweries are taking shape as I peck these words.

Nearby neighbor (and friendly competitor) Blue Tarp Brewing is located at 731 East College Avenue. Their Bantam Weight Irish Red Ale (4.5%) was released December 27 on draft only; next is Mother Hoppin’ Double IPA, which is due if not delivered by now. An Imperial Stout is in the readying stages, and a canning line (!) will arrive by summer. Whew!

I’m just getting started, folks. Jekyll Brewing in Alpharetta is preparing to release a  German-style Kolsch and an IPA for starters; these should appear in mid-to-late May. (The first brewery in Georgia was on Jekyll Island, BTW.)

Burnt Hickory Brewing at 2260 Moon Station Court in Kennesaw already has draft and 22-ounce bottles on the market of their first five products: Ezekiel’s Wheel Pale Ale (6.5%), The Fighting Bishop Belgian Style Tripel (8.5%), Cannon Dragger IPA (8%), The Didjits Blood Orange IPA (named for the band: 7%), and Big Shanty Oatmeal Graham Cracker Stout (9%). Soon to be released is Killdozer 12 Point Buck Ale (12%: this is for a band as well.) This is Georgia’s smallest commercial brewery, brewing only 31 gallons at a time.

Second Self Brewing is likely to choose a location in Chamblee, and will bring forth its “semi-imperial” Red Hop Rye and spiced Thai Wheat Ale in late 2013. Also in the offing are Saison From The Valley, Car Bomb Cream Stout, Ol’ Doyle Coffee Oatmeal Honey Imperial Stout, Li’l’ Pumpkin Special, and (next year) Valentine Ale.

Reformation Brewing, located at 750 Henry Turner Trail in Ball Ground, will bring us their Belgian Dubbel and Belgian Pale Ale in late 2013.

Strawn Brewing at 27 Word Street in Fairburn is up and running, distributing their American Wheat (5.5%), Amber Ale (6%), and Scottish Ale (5.5%), mostly to locations in Atlanta’s Midtown and southern areas. They bill themselves as “The Working Man’s Brewery,” and intend to wean folks off national brands and onto something new and fresh and local.

Oops! I left one out! Red Hare Brewing Co. is located at 1998 Delk Industrial Boulevard in Marietta. They are now producing Long Day Lager (4.98%) and Gangway IPA (6.2%) on draft and in cans (they were the first in Georgia!); today (as I write: Feb. 25), the first run of Watership Brown Ale (7.2%) was canned, and will be released next week. This is, of course, also on draft. Strictly for draft is Rabbit’s Reserve Saison (5.5%) and the just-released Bitter Hearts Black IPA. Wow!

Now for the across-Georgia scoop. Macon Beer Co. at 345 Oglethorpe Street in that city will be macon beer there soon. Their initial product, Macon History Ale, a Brown Ale, will be sold in 12-ounce cans (!) depicting Macon’s Terminal Station; soon afterward, Macon Progress Ale, a Pale Ale, will be released. Both weigh in at 5.5%.

In Savannah proper, Southbound Brewing Co. plans to begin in “early 2013,” according to word I have received, but information is lacking. Check all these peoples’ websites for more tidbits, folksies.

As I write, the future of Griffin’s Eagle & Lion Brewpub is unknown. The business was apparently evicted from its premises on East Taylor Street in Griffin, and is seeking a new location, perhaps in Athens. Only time will tell. This establishment introduced Georgia to cask-conditioned English-style Real Ale.

This will be my last beer column of this nature. In the future, I may well write about things beery, for sure, but in the context of road tripping or other research, such as my endless hunt for the ultimate mom-and-pop eatery and a parallel one for a similar motel. I have much more work to do tracing information on the Terminal Hotel fire and those who died in it, so who knows what I will find and/or where the road will lead me. I think I have found a suitable successor who will write about things strictly brewy; only time will tell.

And I continue to hold forth sporadically on WUOG (90.5 FM) as a guest deejay, playing my plethora of 45 singles to my ever-loyal audience. My health is good, but somehow there for quite awhile I just ran out of words. Perhaps this new computer and I will learn to adjust to each other and my gibberish will continue to spew forth periodically. Until future time, prosit!