Catching Up On a Notebook’s Worth of Summer Tasting 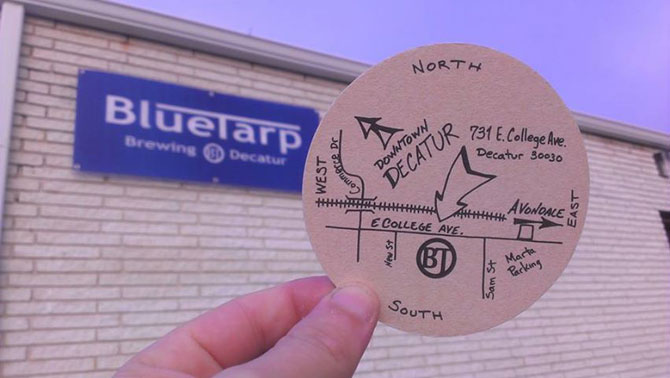 To put it mildly, it’s been a while since I wrote, and lots has happened beeriously. I’ll fill you in on what I’ve tasted and learned of late, with a promise to return as soon as I have more news beerwise, which seems to be a potentially brimful pint glass at present.

I’ll work my way backwards… not an uncommon way of doing things for me. Just this past Saturday (as I write; it was Aug. 24), I found myself at Blue Tarp Brewing at 731 E. College Ave. in Decatur for their inaugural touring and tasting. I didn’t take the tour (I had been there before), but I tasted all four of their available brews and took copious notes.

Fünk Weis 3% It’s a Berliner! Nice Brett (Brettanomyces = bacteria = sour) kick to it! A thirsty soul could drink this all day and not worry about incurring the wrath of the City Of Scottdale D.U.I. Squad. I tasted this one first, noting its stylistic (and amazing!) acidity, and refused end-of-event samples of it because I didn’t want to leave on a sour note. (Tee hee.) This requires no added syrup (as they often use in Berlin, especially woodruff). I was flat amazed; they pulled this one off to perfection. Yes!

Bantam Weight 4.7% I’d had this  Amber Ale before, and liked it enough to order up seconds when I first tried it a short while ago at The Corner Pub at 627 E. College Ave. in Decatur. For a low-gravity brew, this one’s quite tasty.

Hopsided India Pale Ale 6.7% Hit me over the head with a Braves tomahawk (bash, sproing!). Might or might not survive the voyage to Injuh from Jolly Old England, Sahib, but tasty enough to try at least once. Has 75 International Bitterness Units (IBU’s).

Mother Hoppin’ Double IPA 10.1% The brewer’s mother was indeed present, but she wasn’t hoppin’ around. I didn’t ask her about the name reference, but I did enjoy a slow-afternoon’s small sample of this intense brew. It’s surprisingly balanced for so big a beer; the alcohol doesn’t gnaw at you. Watch for Blue Tarp’s tap handles; their beers are worthwhile… especially, especially the Weisbier. A couple of daze later, I waddled in to Porter Beer Bar at 1156 Euclid Ave. in Little Five Points (right down the block from my favorite bar on earth, The Euclid Avenue Yacht Club at 1136) to see if they had any local, new-to-me brews. I was doubly rewarded. On the menu was an offering from Max Lager’s. I ordered up a pint.

Max Lager’s Munich Red Rye 7% There’s more hop character in there than I would have expected. I’ve never had this style before; does it exist in Munich? Is it an original of theirs?? I dunno, but I sure enjoyed it. Their website proclaims its 63 IBUs, and that’s considerable for that type of thang. My server remarked, “We have another Max Lager’s online, but it’s not on the menu yet. Are you interested?” “What team of wild horses is coming in to pull me away?” I asked. “You bet!” So I stayed, in effect, for seconds.

Max Lager’s Hopsplosion 6.5% The hop flavor did indeed explode in my mouth. Yes! This is a mouth-waterer if you like hops, and I love ‘em. This contains 70 IBU. My thanks to that server, whose name I should have noted, for her excellent saleswomanship. Max Lager’s is located downtown at 320 Peachtree St., NE, right where West Peachtree forks off. This is a brewpub which distributes its beer to other locations, and we need to be grateful for the state law change which now allows this.

Recently, I sampled three Georgia-made brews at Trappeze, and another one a couple of weeks ago. Lemme find my notes here.

Monday Night Blind Pirate Double IPA 8% “OOH MY! This is NICE!” I wrote. Practically a hop outrage. The alcohol is hardly evident. Wow.

Jailhouse 4D, Version II 6.5% This is a collaboration between Glenn Golden of Jailhouse and Mark Broe of the former Eagle & Lion Brewpub in Griffin, which sadly is closed; now Mark brews at Jailhouse under the name Yes Face Brewing. “Oh my, but that little country boy can PLAY!” I wrote, in simultaneous tribute to Glenn and Mark and Chuck Berry. A Johnny B. GOOD beer, it is, if you’re lucky enough to find any. A clear example of two like minds in concert.

SweetWater Dank Tank The Price Is Wrong 9% A Belgian Strong Ale. Nice. Better than I expected, and I expected good beer. Not a sour. Rewow.

Coastal Empire Savannah Brown Ale 6.2% At a recent tasting, Piotr (he’s originally from Poland, and not Poland, OH) brought in some. This is canned by Straight To Ale in Huntsville, AL for Savannah-based Coastal Empire Brewing. “This is REALLY nice!” I wrote. It’s a hoppy American Brown Ale that is startlingly original; I thought of the old Blind Man India Brown Ale, to which it compares reasonably favorably. We have yet to open the samples of Coastal Empire Tybee Island Blonde. Both these are available in cans and on draught in Savannah; the Blonde’s 4.7%.

Jailhouse Beer Of The Guards 7% “This is absolutely stunning!” I scrawled at a tasting Aug. 2. Bartender Alex thinks this is a blend of Jailhouse’s Reprieve Saison and their Misdemeanor Ale, both of which are roughly 6%. I think not. This is one of the best American-made Farmhouse Ales I have sampled; so downhome you can almost hear the trains rumble by en route to Macon or Atlanta; so grassy it makes you think of being glad not to have to mow that much lawn. Glenn Golden’s done it again, again. My. What an understatement.

Red Hare Forbidden Fruit 5.5% From the first canning brewery in Georgia comes this draught-only-for-now apple-and-cinnamon brew, chockful of apples from Gilmer County. Barkeep Alex wasn’t wild about it, but I was… I was flat flabbergasted! “It’s not sweet!!… Nor is it tart, nor high gravity,” I wrote. Just right. (I think there’s some nutmeg in there, too.)

Speaking of microbrews in cans, Terrapin’s RecreationAle is now available thusly, in six- and 12-packs. It’s a gorgeous can with a yummy beer inside, one which is quite sessionable at 4.7%.

That encapsulates everything Georgian and new-to-me that I’ve tried since my birthday, which was July 26. OOPS! On July 19, I tried two brews from Three Taverns Brewing in Decatur at The Porter Beer Bar.

Three Taverns Single Intent 5% It seems to be trying to be Belgian, I’ll give it that. It’s probably a Belgique-twist on a Trappistien Enkel. There’s no hop character evident at all, and no pucker.

Three Taverns A Night In Brussels 7.5% An American-style IPA in the Belgian mode? No, this is a hot, still Summer night in Brussels, IL 62013, pop. 139. “There’s not much there, but what there is, is cherce,” as my dad once remarked about my mother. “It DOESN’T suck!” exclaimed my server. It doesn’t much of anything, frankly.

Now for the next segment of our epistle. My work is quite getting cut out for me! There are currently almost more new producing (or about to open) breweries than I can list, much less visit… but I’m gonna do all I can. As I write this, I’ve reserved Saturday, Sept. 7 to visit Strawn Brewing at 27 Word St. in Fairburn for their First Anniversary Party. I’ve only tasted one of their four brews and am waiting until my visit to try the others. Of course, I will report back as soon as I resume standing and write another column.

I also need to visit and tour the following already-open breweries: Monday Night Brewing at 670 Trabert Ave., NW in Atlanta; Burnt Hickory Brewing at 2260 Moon Station Ct., NW in Kennesaw; Red Hare Brewing at 1998 Delk Industrial Blvd. in Marietta; Jekyll Brewing at 2855 Marconi Dr. in Alpharetta and Three Taverns Brewing at 115 New St. in Decatur—plus the longer-established SweetWater Brewing at 195 Ottley Dr., NW (I haven’t connected with them since their infancy, when they were out off Fulton Industrial Blvd.!) and Red Brick Brewing (formerly Atlanta Brewing) at 2323 Defoor Hills Rd., NW. They were once on Williams St., NW, hard by the I-75/85 expressway; I’ve never seen their “new” digs. And this is only the beginning.

Macon Beer Company at 345 Oglethorpe St. in Macon has product already out on draught, or so I have been told. Their Macon Progress Ale was released August 24. I’m hoping to make it to Macon Octoberfest on October 18-20, which will have brews by Macon Beer, Strawn, Coastal Empire and Southbound Brewing (also of Savannah). Gad.

On top of all this, new breweries are open in Savannah (Southbound) and Statesboro (Eagle Creek and Van Gogh’s), plus brewpubs have opened in Blue Ridge, Rome, Columbus (well, Phenix City, AL) and there’s at least one more, plus I’ve still never been to Dahlonega Brewing. Send my liver a sympathy card, folks.

That wraps it up for now. My other stories-to-tell—and over the summer many have evolved—will be along as soon as time and space permit. Drink the good stuff; your liver will thank you, and prosit!   (30.)