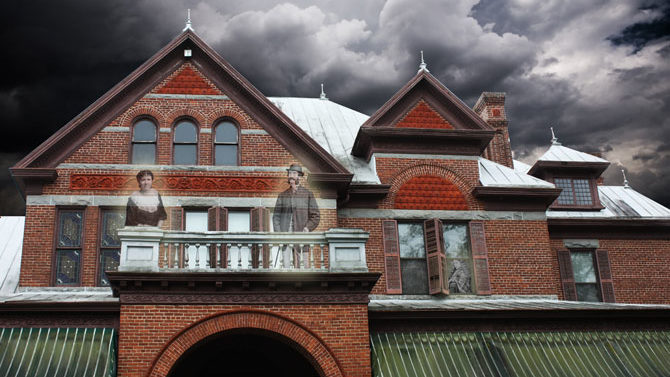 As the leaves begin their annual turning and Halloween is just ahead, my thoughts turn to spookier-than-usual things. Ghost towns, for example.

Although what actually constitutes a bona-fide ghost town is an arbitrary question, my criteria could include loss of a post office, closing of most if not all stores, massive decline in population, absorption or abandonment. And there are others, such as submersion under a lake, but it takes scuba gear to get to those examples, and Scooby-Doo can only be of so much (“GULP!”) help.

Some towns were meant to be temporary. Witness my father’s unnamed lumber-camp birthplace out in western Marion County, FL, so grown back into the wild that try as we might, we couldn’t even find it in the 1960s with the assistance of a helpful deputy sheriff. “I reckon the place is gone, then,” he told us, although this isn’t technically a ghost town because it never was a town to begin with.

Two ghostly places in Clarke County that were once actual towns have utterly vanished. Princeton on South Lumpkin Street consists of plenty of occupied vintage housing, but Dixon’s Grocery is long closed, the Princeton Mill is no more, and the old school house was demolished to make way for the upscale Princeton Mill development. A 1938 Clarke County map shows a circular town named Princeton. Yup, it was amoeba-ed into Athens long ago; I think they disincorporated the city in the early 1940s.

White Hall is the other, although any journey down Whitehall Road will introduce you to a plethora of old mill houses on both sides of the river. Yes, this was also a separate city in 1938 and likewise has been glommed up gradually by Athens. The old Thomas Textile plants still stand (in whole or in part); they were successors to White Milling Company, I believe it was. And the White family brick homestead, lavishly Victorian, still stands at the end of South Milledge Avenue, in use now by the University of Georgia’s Warnell School Of Forestry.

There was a third, similar place, but it was never a real town. Old maps show a dot labeled Sorace in southern Clarke County, on what used to be Old South Milledge Avenue. There are a few old mill houses there as well, adjacent to the 10 Loop. Right where the Loop crosses over Milledge, there was a gigantic frame barn of a building that was once home to the F. S. Royster Guano Co. No joke! In those days, it was common to use bird dung as fertilizer, and guano came from such places as the Galapagos Islands off South America.

In 1966-67, I used to go sit up in the top of the old building, four creaking flights up. It was a “thinking” place for me; nobody seemed to mind. The building still had a good roof, and it was in no danger of collapse. At night, the lowest floor, open to the road, became a noted trysting place. But back to Sorace—where the name came from, I have never learned.

Nearby, at the intersection of East Campus Road and South Milledge Avenue, Allentown once was a separate community that was devoured by the southward march of Athens. A few of the houses remain.

Never a town, but a recognized place nonetheless, is the location on Newton Bridge Road where the Southern Railroad’s Commerce leg crosses. This is Brooks Crossing, GA, thank you, just like where the Seaboard rail track splits off from the old Gainesville Midland on Jefferson Road is known as Fowler Junction, GA. Ah, the railroad towns that came and went! There’s another criterion for ghostly inclusion.

Take Georgia Highway 83 from Madison toward Monticello and you pass through metropolitan Shady Dale. After you’ve four-way-stopped, head on south on 83, squeeze under the trestle and come out on the other side facing not that railroad but another one, which tootles along beside you past a small cement block building and a smattering of houses. This is Machen. That little cinderblock building was the post office for years. Although Machen’s P.O. was only a mile from Shady Dale’s, it hung on into the late 1960s anyway. Machen’s name comes from the fact that it is halfway between Macon and Athens on the Central Of Georgia line. Pronounce it “MATchen,” please.

On U. S. 278 just inside Taliaferro County, heading eastward, one will note an old dead gas station and a handful of houses adjacent to a church. The old store that contained the post office was pulled down recently. The rest is what remains of Robinson, GA 30661. The post office functioned four hours a day until late 1972. Now wholly half the houses are vacant—a town asleep.

Not so in very un-ghostly Vanna, between Bowman and Royston and roughly three miles equidistant. Vanna had a little box of a post office until the 1970s but, unlike Robinson, had no rural route. Even with the route, though, an old-timer at the Athens Postal Sectional Center (back when it was off North Chase Street on Miles Street) told me that Robinson would go days without enough mail to dispatch. “They might receive or send 10 or 12 pieces a week,” he mused. “Compared to Robinson, we nearly needed a boxcar to bring and take all the mail to teeny little ole Vanna! There really ought to be a community post office there.”

I am reminded of the smallest post office I’ve ever actually seen, in financial, not spatial, terms: Berry’s Lick, KY. “In its last year of operation, that old man’s revenue was something like $11.55,” Mr. Forgy, postmaster of nearby Quality, KY chuckled. “Congressman Natcher [William H. Natcher, D-Ky., a bipartisanly popular man, who served Kentucky’s Second Congressional District from 1953 until his death in 1994] was a big fan of small post offices; couldn’t hardly stand to see one closed. Well, when the poor old fellow at Berry’s Lick went to go to work one day, to open up the store with the post office in it, he found that the building had collapsed overnight. Come a good rain and it couldn’t take anymore, I guess. But every day after that he’d go out and raise the flag and take it down. They finally officially declared that office to be closed. Bill couldn’t believe the place when he saw it: ‘Reckon that does it for him,’ he commented. ‘I’m sorry to see these little ones go. How will the old folks get their mail now?’ That man cares about his constituents.”

Back to Georgia, like Princeton was swallowed up by Athens, Egan was chopped in half and eaten by East Point and College Park. There is a shopping center where the mill used to be, and several streets of old mill houses remain, mostly in College Park, houses that were part of what once was bustling Egan.

Campbellton is more fun, though. It served as the seat of Campbell County—which, along with Milton, was consolidated with Fulton in 1934—from its formation in the 1830s until 1874 or so, when the A&WP Railroad came through, and Fairburn built up along the track, quickly outdistancing Campbellton as the largest place around. A new courthouse was erected in Fairburn (it still stands), and the old one in Campbellton was torn down circa 1907 to provide bricks for chimneys of a couple of houses. A marker tells you what was there, and old Baptist and Methodist churches are still active, along with a Masonic lodge. They and a handful of older dwellings are all that remains of Campbellton.

On the newer road, though, a grocery sells gas and supplies and beer, and is doing its best to prevent Campbellton from being what might as well be described as a balloon with its skin off. They really should have a “SHOP DOWNTOWN CAMPBELLTON!” sign. Campbellton is on most maps, but you’ll have to do some looking for it. It’s a fun destination for a nice slow day. Hint: Try to go in from Cochran Road. It’s more fun that way.

Constitution Road in southeast Atlanta will indeed take you to what once was Constitution, GA. It possessed a circular city limit and was half in Fulton and half in DeKalb County. When Atlanta annexed the Thomasville area in 1952, it gulped up half of what was left of Constitution, which actually predated everything around it. It’s still pretty rural on the DeKalb side.

Pete will think I’m remiss if I don’t mention Scull Shoals. This historic townsite in Greene County still has visible walls. It had a bank, gin and stores, but the Oconee River flooded it twice, which caused its inhabitants to give up on the place, which was said to be cursed. More on this haven directly.

Oh, me… I’ve left out Dunlap, Smithonia, Clarksboro, Swords, Hayston, Enterprise, Oglesby, Ross, Eastville, Bairdstown and more that are just within easy sneezing distance of Athens. Not to mention places like the long-forgotten Magnolia, which was the county seat of Clinch County before the railroad came through and Homerville developed. Or poor Barnett, which was trounced first by the boll weevil, then World War I, then the Great Depression, then World War II. (That’s like putting Culver-Stockton College up against Alabama.) A big fire apparently burned up the central part of town, so that almost nothing was left by the early 1960s. The post office soldiered on for a while, but the town has slipped from a high of 650 residents around 1915 down to probably 50 now.

More stories and more ghosties remain to be explored. I’ll read up some more and write another such column if you like. Just don’t get lost in downtown Stoneham.