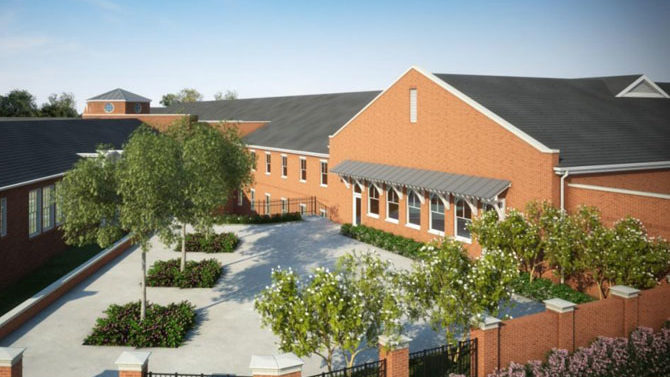 â€œWhat does the 21st-century school building look like?â€ That question drives David Stubbs, Clarke County School Districtâ€™s director of facilities planning and construction, but itâ€™s a revision from where he started. Initially, in beginning his work with CCSD, he asked â€œWhat does the 21st-century classroom look like?â€ But, as heâ€™s guided the design of several recent elementary school projects throughout the district, it’s become apparent that a more holistic look at the academic environment was needed.

At the recently renovated and rebuilt Fowler Drive Elementary, there was the introduction of ideas for a more engaging learning environment, built around the principle that as many elements of the building as possible should be informative or educational. This was expressed in many newer, more artistic treatments of hallway floors and walls, as well as revealed building systems that show students how the world around them actually works. There are also some beginning explorations of how technology can be integrated into the learning environment, and a progression towards more collaborative and flexible groupings of classrooms, centered, at Fowler, around a common area between rooms.

The new Westside Elementary, as yet unconstructed, is next in line, in terms of this ideological progression. It has a similar approach to collaborative spaces, and the â€œthree-prongedâ€ layout of the school is very familiar, but it does a better job of integrating with the community around it. Built on blocks of a failed subdivision, it centers its front door on a neighborhood park across the street.

Barrow Elementaryâ€™s renovation and rebuilding will feature the newest model in terms of collaborative spaces, with a grouping of four classrooms sharing a large common area, situated between two rooms on one side of the main hallway. Flexible walls are being explored, which would allow one or two classrooms to open into the collaborative space, creating a very dynamic environment for educating many different groupsâ€”from a few students breaking out from their class to adding an entire grade level. The design also does a good job of blending old and new, with its new two-story wing entirely behind the older portion, and much more inviting approaches from the surrounding neighborhood.

A recognition that furnishings within the building should be as dynamic as this new environment is also essential. Wheeled and easily moveable furniture will facilitate not only flexibility between classrooms, but within the classroom as well, with many potential configurations depending on the activity and subject matter, as well as the learning and teaching styles of students and instructors. Stubbs sees the diversity of classroom types (some being more open, and others more traditional), and the flexibility within each one, as a way for students and teachers to play to their strengths, working and learning in ways that are most comfortable. Interesting prototypes being explored at CCSD District Services include a wobbly stoolâ€”a solution for fidgety kids that allows them to move just a little bit while still being engaged in learningâ€”and a taller-than-usual workstation, which could serve kids who prefer to work standing up.

Of course, these ideas wonâ€™t simply be for the newest schools. Howard Stroud Elementary will also get a similar treatment in terms of classroom arrangement during its retrofit. Two other elementaries, Whit Davis and Cleveland Road, are sister schools, built from the same floorplan. Likewise, even if full-scale improvements canâ€™t be implemented at those schools, the ideas being explored at the the classroom level can be brought gradually online as furnishings hit the end of their lifespans.

Maxine Easom Elementary, on the site of the old Gaines Elementary, will be far and away the most interesting and experimental of the new facilities. It will feature wholesale reevaluations of the core elements that constitute a school, including cafeteria and auditorium spaces as well as the media center, a space once upon a time known as the library. Although such functions have traditionally been more isolatedâ€”set off from the main circulation of the schoolâ€”at Easom, an outsized cafeteria with integrated amphitheater and stage will be a welcoming, atrium-like space at the heart of the school. The design move will also allow a more efficient serving of lunch: Stubbs claims it will reduce the number of lunch seatings to two. â€œThatâ€™s not done in this district,â€ he notes. A mixture of fixed and moveable seating will be applied here as well, allowing the space to shift from lobby to lunchroom to auditorium throughout the day.

Wrapping around Easom’s atrium-cafeteria will be two levels of classrooms, with a much-reduced media center perched above. As technology has increasingly become handheld and wireless, the need for a set-aside space for such programming has been reduced.

The design also does a good job of redefining the schoolâ€™s relationship to the community, incorporating the historic school building for an as yet undefined community use and putting the playgrounds in front as greenspace that is open and inviting to neighbors. A rather grand avenue approaches the front door of the school, with parking off to the side, rather than out in front.

It has been interesting to see this sequence of elementary school designs progress, but Clarke Central High Schoolâ€™s renovation is also part of the current round of E-SPLOST projects. The school district has spent a lot of time on its elementary schools, and there are certainly a lot more of them. It will be interesting to see how these 21st-century ideas about technology and flexible space are interpreted for students closer to an adult age. While the design process hasnâ€™t really started there, Stubbs sees partnerships with surrounding institutions, especially on the career and technology sides of things, becoming increasingly prominent. Combined with the notion of 9th-and 10th-grade academies, the result could be a more campus-like strategy to organizing space.

Although most of these ideas have barely left the drawing board, the enthusiasm with which Clarke County School District has taken on the idea of creating innovative learning environments is encouraging. The next question to ask might be â€œWhat does the 21st-century school district look like?â€ With CCSD’s innovative institutional partnerships and optimistic approach to tackling the design of school facilities, Iâ€™d say it might be something like this.