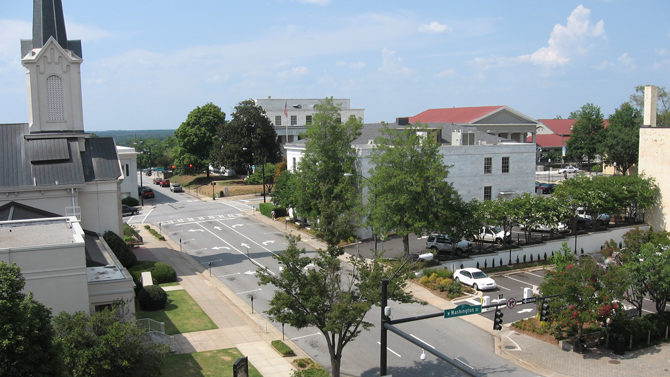 The University of Georgia College of Environment and Design, home to landscape architecture, historic preservation and professor Jack Crowleyâ€™s nascent planning graduate programs, will not be a part of his downtown master plan proposal, as currently pitched.

At a June meeting, Crowley assured Mayor Nancy Denson, a few commissioners, Athens Downtown Development Authority board members and local citizens that his project would be conducted as a fully professional one, rather than an academic service learning project, despite the fact that Crowley would employ graduate students at a relatively small cost to the city. Administrators at CED are worried by the projectâ€™s status as a â€œprofessionalâ€ one and the ethical ramifications of unfairly competing with their alumni, many of whom responded to the ADDAâ€™s original request for proposals for a downtown master plan. As a result, theyâ€™ve decided that no money will come through their department for the project. That means Crowley will have to find another department or institute to route the assistantships through or be paid directly as a consultant. The ADDA still plans to hire Crowley for $30,000 at a meeting Tuesday.

College administrators’ and alumni’s concerns raise some other issues, as well. If Crowley is indeed a professional consultant, then he has effectively bypassed the typical, transparent RFP process. Dozens of firms responded to the ADDA’s initial request for proposals, and this project should be compared to those, if weâ€™re really to know how much of a bargain it is for the community. Crowley acknowledged at the recent ADDA meeting that several components will be missing from his work, including a detailed market analysis and more comprehensive infrastructure capacity studies. Could it be that if you subtracted those sorts of elements out of other professional consultants proposals, and simply asked how much they might charge for a similarly bare-bones visioning exercise, the costs might be the same?

Just over a year ago, we were in a similar situation, with the mayor and commission teaming up with the Athens-Clarke Economic Development Foundation to hire a consultant to vet the riverfront Blue Heron project. Confusion over the scope and products of the project and miscommunication plagued the process, resulting in frustration all around. With barely a month between Crowleyâ€™s pitch and ADDAâ€™s decision to fund the project, are we about to go rushing into a similar situation?

Crowley pledged during his presentation that the project would be â€œabsolutely transparent.â€ If thatâ€™s the case, now is the time to slow down, to at least make sure that thereâ€™s a clear understandingâ€”not just among board members and commissioners, but the many citizens who have demanded a master plan for so longâ€”of the roles and expectations for this effort, as well as who is paying whom for what. If this process goes awry for being too quickly or haphazardly conceived, we’re unlikely to get another chance at a downtown master plan. Now is the time to make sure weâ€™ve considered all the possibilities before us.

Iâ€™d be remiss if I didnâ€™t retort to Athens Banner-Herald Editorial Page Editor Jim Thompsonâ€™s sideways accusation that I donâ€™t count football fans and alumni as real tourists or lovers of Athens. Of course they count, and I have happily advocated on many occasions paving public art-encrusted extensions of the Oconee River Quality-of-Lifeway all over town with their sales tax dollars. No matter why the many repeat visitors to Athens are here, we should do our best to make sure we understand our tourist customersâ€™ concerns, what they like and what they donâ€™t like, so that we can ensure they continue to spend their hard-earned out-of-town dollars here for years to come. My gut feeling, though, is whether they come for the music or the football, they donâ€™t stay for the Walmart. Likewise, I doubt North Campus is a popular tailgate location purely for its proximity to Five Guys and Starbucks.

The bottom line is that downtown is not simply a collection of private property, and we ought to try to gain insight from the poor stiffs working long hours in often-hostile late-night conditions about how things really work and how we might make them better, regardless of whether we think less of them for playing music in their free time. As one of Thompsonâ€™s beloved commenters (the only people whose opinions really count!) put it in response to his piece:

â€œSurely someone’s opinions, suggestions or complaints should not be validated by who they are, where they reside or what they do for a living. Many times those on the outside, those without vast ‘experience,’ those who are sometimes deemed ‘not worthy’ of providing reasoned input, they are marginalized or shunned by those who think mightly [sic] of themselves. Yet, it should be what they say that is measured, and not who they are or what status in life we’ve deemed they belong.â€