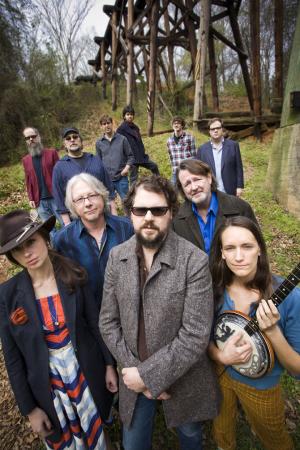 Patterson Hood and his musical cohorts deserve more credit for generating publicity against a downtown Walmart.

There may be no new Walmart in Athens, but that doesn’t mean other communities have been so lucky.

According to a story in the Decatur Metro, Selig Enterprises recently received all the necessary permits to begin building a Walmart there. It’s an interesting contrast to the recent statement Selig Senior Vice President Jo Ann Chitty made to Flagpole: “It wasn’t specifically about Athens. There was a corporate decision to suspend [urban store building] because the stores weren’t performing the way they wanted them to.” But Decatur is hardly alone: Plenty of communities are undergoing the same sorts of battles that we endured locally last year, against Walmarts large and small. Walmart’s urban strategy continues unabated and is even accelerating. An October story from Wall Street Journal affiliate Marketwatch reports that the mega-retailer plans to open 500 of the urban stores by 2016. Hardly the suspension Chitty pointed to.

If Selig’s claims don’t stand up, how else can we resolve Walmart’s withdrawal? Maybe Selig and Walmart realized what Athenians had been saying the whole time—that it was a bad design? Or maybe it was the national media blitz that culminated in  Patterson Hood and the Downtown 13’s well-circulated music video? Rumors last summer suggested that Hood and the gang did indeed get some airplay in Walmart’s headquarters of Bentonville, AK, making downtown Athens less appealing than other communities where urban Walmarts could be built first. Spokesmen were noncommittal throughout the process and, reportedly, the company tabled the downtown Athens store before ultimately rejecting it. Of course, Selig wouldn’t offer a sportsmanlike congratulations to the Athens musicians for a PR battle well-fought, certainly not halfway through the game. Selig’s still got a few historic structures it needs permission to knock down, after all.

All the places that are invoked in the music video for the protest song, “After It’s Gone,” are still in as much peril as they ever were, despite the defeat of Walmart. Local Main Street businesses are still giving way to generic apartments and gentrification; bulldozers are still aimed at Jittery Joe’s Roasting Co., and the Murmur trestle is still being left to rot. While the sentiment of Hood’s song was appropriate for that moment, providing a flag to rally around, encouraging Athenians to hold the line against big business, it misses the greater power in the unlikely story of Athens, GA.

The trestle, the roaster and all those other places have attained their significance primarily as representations of the hard work put in by creative entrepreneurs over the decades, and while the raw matter of those places may be in jeopardy, the hard work and creativity that organized that matter is much more powerful than we give it credit for. Clemson, SC, Columbia, SC, Auburn, AL, Tuscaloosa, AL and Knoxville, TN are just a few of a host of dull college towns in the South, all quite similar on paper. In fact, some are better than us on paper, with larger populations, better infrastructure and more interesting scenery. So, why is our particular Southern college town known around the world?

This creative community, through song, writing, painting, photography and video has so effectively laid out our intense and unique visions of this community in ways that put the cinematically lazy time-lapse (synced up to generic out-of-town muzak) video released to promote the downtown master plan to shame. If “After It’s Gone” hinted at a Galt-esque abandonment of Athens, when there’s no longer a “reason to stay here,” what might happen if the narrative and visionary power of Athens’ creative community were really taken to heart by local decision-makers?

Kishi Bashi lent a song to Microsoft, and of Montreal was selling Outback steaks for a while. Kudos to them. Maybe there’s something to their ability to leverage national attention for commercial purposes. Consider that, recently, the University of Georgia quite successfully featured R.E.M.’s “Oh My Heart” in a commercial that emphasizes the emotional connection that people feel to Athens and UGA, with a chorus triumphantly declaring that “this place is the beat of my heart.” It’s fairly powerful, for a commercial. Compare that to the Athens Convention and Visitors Bureau’s bulldawgy pun of a slogan “Life Unleashed.” While most university public service announcements don’t generate news stories, blog buzz and thousands of YouTube views, as the R.E.M. one did.

If an R.E.M song can help convince nostalgic alumni to whip out their checkbooks and donate, or tip the decisions of high schoolers about where to enroll—essentially what to invest in or where to live—what else is possible? Rather than being voices for hire, suppose our nationally recognized artists and musicians used their platform to frame Athens’ future in more interesting terms, to court the best that might migrate here, rather than fend off the worst?