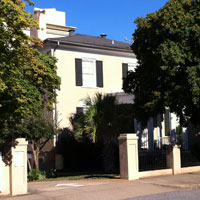 Another week, and another frat house proposed on the outskirts of the historic Reese and Pope neighborhood. This time itâ€™s Phi Kappa Tau, proposing to convert a former restaurant on West Broad into its banquet hall, with long-term plans of renovating the building into a full-fledged fraternity house. Also looming is a proposed Sigma Chi chapter on North Milledge, between Hancock and Meigs on the border of the Cobbham and Reese and Pope neighborhoods.

With space on South Milledge Avenue largely maxed out and the university as a less than reputable landlord on campusâ€”having muscled several fraternities off Lumpkin Street over the last few yearsâ€”itâ€™s no wonder these organizations are looking for land free and clear off campus. Unfortunately, fraternities have such a negative impact on neighborhoods that no one wants them nearby. Already neighbors complain of noise from Kappa Alpha, the last fraternity to move north of Milledge, and are worried about the precedent the votes on these new requests will set.

Of course, with reports like the one headlined â€œFlaming deer head sets off Chi Phi fire alarmâ€ appearing all too frequently in The Red and Black and other crime blotters, itâ€™s not just parking and partying that neighbors have to worry about. Thereâ€™s also the frequent visits from siren-blaring local law enforcement at all hours of the night. Chi Phi, of course, has a new house under construction on South Milledge, abutting the Midtown-Bloomfield neighborhood; county commissioners permitted that development over neighborhood objections, afraid that something worse might be developed. Fraternities are bad neighbors in Athens, bottom line, and with no real solution likely coming from the university on the issue, neighbors are right to be very upset about the rise of this kind of use.

These places have the same impact as some of the rowdiest bars in town, and residential neighborhoods are inappropriate places for them. And thatâ€™s part of what makes Phi Kappa Tauâ€™s proposal so interesting. At first, the ailing commercial strip of West Broad might seem like an excellent place for this land use; the building has been vacant, and it’s not quite so embedded in a neighborhood as other locations where such uses have been proposed or executed (though Dearing and Reese Street residents would almost certainly be kept up at night). However, there are other things happening on West Broad that suggest a brighter future for the corridor.

Local businesses have begun colonizing that strip, suggesting a larger pattern of reinvestment as downtown fills up and out. Especially now that a master plan seems likely to be undertaken soon, perhaps we should hold off on locking in that siteâ€™s use, potentially for generations. The lot it would occupy is nearly a whole blockâ€™s worth of frontage on West Broad, and if more walkable retail really is in the cards, then fraternity parking might not be the highest and best use of that site.

Whatâ€™s really needed, if fraternities are going to continue looking off campus, is a new model that better blends into its context in terms of use and impact, as well as design and footprint. The large party lawn, with massive alumni parking lot, has got to go. They arenâ€™t necessities for Greek life, and there are precedents as near as Georgia Tech that could provide inspiration. Some schools even assign fraternities their own floors in dormitories. What we need locally is a sense of other ways to contain a Greek residential community besides the Milledge Avenue concept.

If such alternative models were applied, how might they turn out here? The perennially for sale Albon Chase house at Clayton and Hull streets downtown comes to mind as a structure that could easily be adapted for a fraternity use, with a little creativity and flexibility on the part of both the fraternity and county planners. Already located in an entertainment district and well-served by shared parking, a fraternity house conversion there might blend right in. The structureâ€™s residential character (which makes it ill-suited for a retail use) is reminiscent of the character of Milledge Avenue houses, and so could give a fraternity house the architectural branding of that genre.

Beyond that, itâ€™s worth considering whether mixed-use and downtown-style buildings in general might be a better way to go. Already, housing developers are ramping up construction of student housing in the district, and thereâ€™s no reason why frat boys wouldnâ€™t be up for loft-style living. A little retail on the ground floor would ameliorate many of the negatives of a fraternity on a commercial strip; even a redesign of Phi Kappa Tauâ€™s proposal could turn that structure into a positive anchor for West Broad, rather than the kind that drags it down. Shared parking could also be more viable than a giant single-use lot. So, already there are potentials for a mixed-use synergy from such a strategy. Likewise, taking the partying that fraternities attract and shifting it indoors and off the lawn would do much to address neighbors’ concerns about noise. An urban location reduces the need for cars, parking and the potential for drunk driving, with easier access to cabs and campus buses.

A more flexible and creative approach to fraternity housing that anticipates the problems that these houses will cause, and designs with prevention in mind, is sorely needed. The question is whether alumni funders (perhaps more eager for a gameday tailgating spot than to work cooperatively with the city) will start listening to neighborsâ€”and the trends in housing that apply to this generation of college studentsâ€”to create a truly successful academic community, and not just another animal house. The Phi Kappa Tau motto says their organizationâ€™s purpose is â€œto champion a lifelong commitment to brotherhood, learning, ethical leadership and exemplary character.” Hereâ€™s hoping that being good neighbors and good citizens is part of that. Real leadership, dialogue with the community and a desire for creative compromise would be a great place to start.