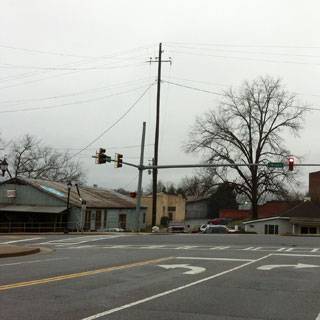 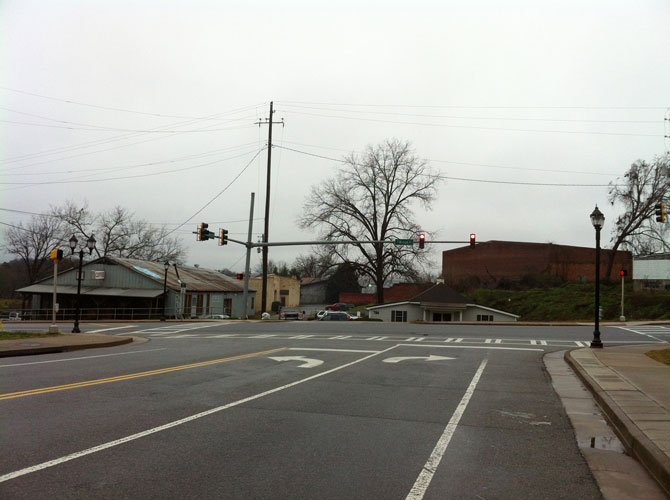 If Selig wants to build its shopping center as currently drawn, commissioners will have to vote to abandon a proposed extension of Hickory Street (extending into the A&D site from this intersection). Will the Commission use that leverage to enforce commun

Making the Tough Call: Weâ€™re inching closer to the expiration of a 90-day delay on the demolition of structures on the Armstrong & Dobbs property in order to build a downtown Walmart. Although the issue has been talked about extensively by many in the community, thereâ€™s been a deafening silence, at least on the record, from two parties which likely will soon have to face each other: Selig, the Atlanta firm developing the Walmart complex, and the Athens-Clarke County Commission.

Selig has been meeting quietly with small groups of community members, though. In those meetings, Selig representatives have made many conflicting statements about the details of the project, claiming to be listening to concerns, but betraying no apparent intention to address major issues like scale and connectivity. Basically, these developers have been telling people whatever they want to hear in order to make people comfortable with the project. Community members have dutifully spoken up to make their priorities clear, but so far, thereâ€™s been no good faith effort on Selig’s part to respond to any of them.

When details of the proposed shopping center were first made public, the developers made a big show of claiming that they were legally entitled to build their project exactly as drawn, and the commission has largely seemed content to go along with that line. A commission vote on the project would be contentious, and voting either for or against it would be a tricky proposition. Unfortunately for both Selig and the commission, and fortunately for Athens voters, itâ€™s pretty clear that Seligâ€™s narrative is false.

The possibility of a commission vote likely hinges on an intended connection between Hickory and Fulton streets linking two major transportation hubs (UGAâ€™s Jackson Street mall and the Multimodal Center), which was codified in a 9â€“0 July 2010 commission vote updating ACC’s Transportation Corridor Concept Map. The extension of Hickory, which would cut right through the middle of Seligâ€™s project, has to be provided for in any plans for that site, according to county code, and Selig hasnâ€™t done that in drawings theyâ€™ve shown thus far. According to ACC Transportation and Public Works Director David Clark, the ACC Hearings Board can vote to allow the relocation of a planned right-of-way within the same tract where it is located on the map, but the commission must vote to allow removal of a right-of-way. Whether relocated or not, the connection must remain a vehicular right-of-wayâ€”a pedestrian throughway is not sufficient.

What this means is that either Selig must make wholesale changes to its design before submitting plans to the county, or the commission must vote on whether to allow them to build the project as drawn, with the knowledge that a vote to abandon the planned Hickory Street extension will symbolize a vote for Walmart to the thousands and thousands of petition-signing citizens. Hickory Street could be the leverage commissioners need, if the ones who have claimed to be concerned about issues like scale are really serious about bringing Selig to the table to work with the community.

Mountains of research published from the last decade or so support the notion that this urban Walmart supercenter is a huge gamble, and that the predictions of new jobs and tax revenue are far less certain than those making them claim. Will commissioners really risk the futures of downtown Athens, its extraordinary collection of independent businesses and their owners and employees for 300 low-income jobs? This is a very real risk. The stakes are too high, and the reward is too low.

While the idea (pitched by Russell Edwards and People for a Better Athens) of limiting retail square footage in the downtown area to 30,000 square feet hasnâ€™t gained much traction, there may be other tools that could accomplish similar goals, should commissioners feel inclined to wade into the fray in a more proactive manner than their current strategy of waiting for Selig to act. Retail uses over a certain square footage could be designated a special use requiring approval, as fraternity and sorority houses are. Recognizing that especially large projects need extra scrutiny would be a logical approach that wouldnâ€™t necessarily remove property rights or discourage investment in the way that a raw cap on size might. However, so long as our commissioners seem content to wait and react, rather than planning ahead, such strategies are probably outside the realm of possibility in Athens.

A Reminder: The Athens-Clarke Heritage Foundation will hold its symposium, â€œSouthern Mills: Economically Smart | Socially Responsibleâ€ this Saturday, Feb. 4. Visit www.achfonline.org to get more info and register if you havenâ€™t already.