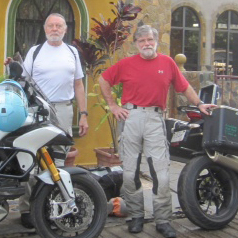 [Editorâ€™s Note: Local attorney Rusty Quarterman and retired dentist Jim Morang are on a motorcycle trip through Mexico and parts of Central America. They have traveled on their matching Multistrada 1200S Ducati motorcycles without incident for three weeks, sending back occasional reports and photographs. All of a sudden, disaster struck when Jim hit a pothole. This is his account of what happened next, edited only to complete abbreviated words and throw in the occasional paragraph break. More about the trip and lots more photographs are posted at the NPR Ducati web site: www.nprducati.com]

Friday, Feb. 3 (I think), I am writing this as much for my ability to look back and reflect as to pass it on butâ€¦ late yesterday, trying to get from Guatemala to the Mexico border before dark, I hit a vicious hole. About pulled the handlebars from my hands. Result: two flat tires, two pretty badly bent rims. Side of road; middle of nowhere. Beside bad place in an otherwise terrible road without hope of help. Big trucks flying by. Saving grace is they had to slow to about 60 because of the holes, ruts, etc. They had been patched with sand, and the sand flew up all over us. Now, it is getting dusk and soon dark. You know what happens after dark. Plus, the thought of getting run over didn’t escape my mind.

The first was a police vehicle that didn’t even slow. It might have been the one that we passed earlier at above the speed limit. He might have waved, but there was too much dust to tell. Finally, a pickup stopped, with three men in it who worked for a huge fruit consortium. Very nice people. But he said he couldn’t put the Ducati (now seeming to look bigger and heavier than ever) in his nice truck, and I don’t blame him. After much discussionâ€”of which I didn’t have a clue of what was being said but I could tell it was in their heart to help usâ€”they said if we left it on the road overnight, it wouldn’t be there the next morning. My U.S.A. insurance is no good here. We have Mexico coverage and had to buy insurance in some other country, but I don’t think we have it for Guatemala.

Lesson learned. Actually, lots of lessons learned this trip. (Laura [Jimâ€™s wife] says one she has learned is Iâ€™ve got to get a job to pay for all the preparation costs before the trip, cost of trip, and post-trip costs, like new wheels for the Ducati. Once again, I am going on too long, but there are more lessons here.)

These guys called a friend in the next town, where they live, to bring his truck to get my bike. Now, after dark, these fellows came in a small pickup. I told Rusty it ain’t gonna fit in that truck. He said, don’t worry they’ll lay it down. I doubt you can imagine the thoughts I had of the damage laying it down would do to my once beautiful bike. Iâ€™ve layed it down on a mountain road in Tennessee, and I expected worse damage from laying it down in that truck.

He parked it in a ditch so it wouldn’t be so far to pick it up, and we backed the back wheel on. He had a metal frame about chest high on the bed, and there was no way it was going to let the front of the bike on. There were seven of us standing around in the dark, about 90 degrees, huge 18-wheelers passing within feet of us, scratching our heads. I thought, letâ€™s push it in the woods and cover it with branches and stuff. We were in the middle of a rubber farm. Looked like scrub, useless trees to us. Anyway, the truck guy got a wrench from somewhere. I got my little LED flash light from my tank bag for our only light, and he unbolted the frame. Some held up the frame and rest lifted the front of the bike onto the truck and lowered the frame back down. Sorta. Tied it on one side with a piece of rope of suspect strength, put it in gear to hold it in the truck, and the nicest young fellow named Amile and I stood in the back with the bike to stabilize it, and off to town we went. Bike rode perfectly.

Got to the garage, and the mechanic wasn’t there. The garage is different here. This one was part of his house. Amile lived directly across the street, and he offered to put it in his garage for the might. Got it off, and the mechanic came home. He examined the wheels and sorta snorted and shook his head. I didn’t need to know the language to know what he was thinking. The truck guys took us to a hotel. Keep in mind this isn’t a vacation destination spot, but it was a good hotel, and we sprung for two suites for about $30 each.

I was exhausted but wondering where we were going to get two wheels for this new model Ducati. Answer: probably Italy. Quarterman had already told me a while back not to screw up his big annual vacation trip by getting sick or crashing or dying from advanced age, so there was additional pressure. The amazing thing is, he never shook his head like the mechanic or seemed concerned at all and not put out at any point of this whole ordeal. He said this is why it is called an â€œadventura.â€ Another life lesson I’m working on. Laura will testify under oath that I desperately need to.

Amile (about 30) his lovely wife and their beautiful 6-year-old daughter got on their Honda scooter (she drove) and followed us to the hotel to be sure we got checked in OK. He even came up to my suite to tell me the desk lady had given me back incorrect change and would give it back when we came down. For the second time, I offered him some money but for the second time he put his hand on his heart and said, “From the heart.â€ I did my best to tell him I accept their help from the heart, also. The 6-year-old greeted me with a kiss and hug and left with the same insistent affection. I expect my secret deodorant (the best travel deodorant ever) might have lost some of its strength.

We were going back to the garage at 8 a.m. this morning, but Amileâ€™s wife was in the dining room. She explained as we had cafÃ© con leche that the mechanic (about 25 and the head-shaker who inspired my utmost confidence) got to work at 6 a.m. and had fixed one wheel and was working on the second. My original thought was that he would hit it a few times with a big hammer or maybe heat it and hit it, breaking it or rendering it useless. We didn’t have much to lose. (Remember Italy.)

Rusty went with her on the scooter to their house and the mechanic, as he speaks Spanish, and he was quite antsy to keep moving and doing something all the time. That left me to write this mostly-useless-to-most-people discourse. Rusty called on Maria Gloria’s loaned phone saying the mechanic heated the wheel and formed it to almost where you canâ€™t tell some gringo hit a deep hole with sharp pavement on exit from the hole and broke his ride. He welded a bead around the bent area, and Rusty said you almost couldn’t tell it was bent.

Thank you Paul and Vic at NPR Ducati for getting me to take the rear wheel removal socket that weighs about the same as the wheel. I haven’t seen the result yet, but I have faith it will work. I can see Drew, Vic and Paul all shaking their heads now.

Here’s the real lesson. I don’t know how many of you are believers or what you believe in, but you gotta recognize something in the hearts of these wonderful people and the very unlikely set of circumstances that brought us together last night. It all went as if directed, and I know that it was. Everything tied together too perfectly to be just dumb luck. The right people stopped to see what was wrong, took their time to call someone to help transport the bike, stayed to load the beast and didnâ€™t give up when it seemed apparent it wasn’t going to work. Then they took us to a mechanic they knew who has the skill to help us, Amile and his family live across from the mechanic, his wife immediately joined the effort to make things work, not only for the fixing of the bike but to insure that Rusty and I were properly cared for and comfortable.

It was originally a group of people seemingly unconnected and ending in all of Amile’s family digging deep into their hearts to assist two old-goat gringos, one of which seems not to be able to find his fanny with both handsâ€”me. God is in their hearts, and I struggle with keeping that belief in mine. Things like this strengthen this belief. He has a plan. It seems as if I jump on the bandwagon when I am helped and hang onto the edges when times aren’t as good. I know some of my buddies who read this are also shaking their heads. As when I go to Nicaragua with mission groups to extract teeth in pretty extreme rural areas and come back full of thankfulness that gradually wears off and I need another fix, this has done it. It doesn’t matter if the wheels get fixed, although it would be nice. Meeting these people has strengthened my beliefs, and they have to be the greatest folks in the world. Going to Nicaragua several years, Mexico, and now this trip with Rusty reaffirms my feelings. I cannot think of anyone who has not smiled and spoken or anybody who showed any animosity toward us or America. I am waiting at the hotel for my amigo Rusty to return with my bike. I hope he takes it on a high speed run before I ride it, but donâ€™t think that is going to happen. For those of you who may think Rusty is a little strange, eccentric or just plain weird, I am not sure I can dispel that, but I can tell you he, too, has a heart of gold, and I am sure heâ€™s just as good and loyal to you as to me, a relatively new buddy, Jimmy.