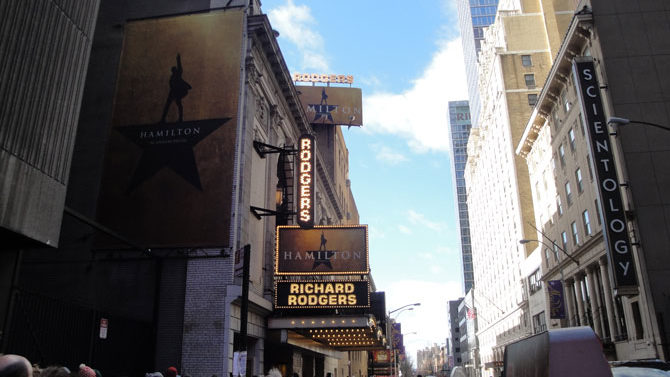 After cherishing my unexpectedly acquired tickets for many months, I wondered what it would be like without my favorites from the cast album and after knowing the music so well. Then, the election turned the world upside down, Pence dared to show his face in the Richard Rodgers Theatre and got politely called out, and the fierce “Immigrants” from the just-released Hamilton Mixtape blew my mind on the predawn drive to catch a plane to New York.

It was hard to be in the moment at first. My brain kept jumping from one thought to another: I’m seeing Hamilton!/I like new Aaron Burr/look how they staged that/ wow!/HERCULES MULLIGAN!/I love the double revolve/so much going on, where do I look?

And then Laurens, played by Andrew Chappelle, dropped a crucial line during “My Shot.” The music stopped as he was supposed to say “let’s get this guy in front of a crowd!” He spit it out right as the music resumed, and I was reminded that yes, this is live theater, so live it!

The new cast members get the job done. Brandon Dixon made a fantastic Aaron Burr. Javier Muñoz as Hamilton was solid, though I liked him better as the older Hamilton—his young Hamilton needed a hint more of striving scrappiness. Seth Stewart was so good as Lafayette, and brilliant as Jefferson. Nicholas Christopher, the new George Washington, nailed it. I liked Chappelle’s Laurens, and especially Phillip—I realized after the show that he wasn’t the regular or the understudy, but one of the swings, prepared to go on for several different roles. Impressive! As a big fan of Hercules Mulligan, I was thrilled to see soon-to-depart Okieriete Onaodowan, not just as Mulligan but as a more fun Madison than you can experience by listening to the album.

Lexi Lawson did very well as Eliza Schuyler Hamilton. However, I wasn’t crazy about Mandy Gonzalez as Angelica. She has a lovely Broadway voice and would also have done well as Eliza, but her portrayal somehow lacked some of the spunky, crisp ease in rhyming that Angelica should have. Original Peggy/Mrs. Reynolds Jasmine Jones had her final performance mere days after I saw the show. She rocked it—she was funny, sultry and powerful. Every performer in the ensemble was flawless.

Rory O’Malley’s King George III positively reigned every time he stepped onstage. He was simply everything: regal, slightly crazy, funny, wry, pointed and with more stage time in act two than I had expected. The audience adored him.

This limbo, between a disastrous election and the inauguration of a walking nightmare accompanied by a parade of dangerous fools for his cabinet, made a strange time to see this particular show. Hamilton celebrates our founding with a sense of hope despite the divisiveness of politics, but a positive political outlook is hard to summon at the moment. For example, in “Dear Theodosia,” Burr and Hamilton are optimistic about making the country right for their children to grow up in; I was wondering how we can ever make things right for our kids over these next frightening few years. “One Last Time” made me think of Obama more than Washington, and how sad it is to contemplate saying goodbye to a beloved president while fearing what will follow. The references to slavery made me reflect on the bitter fact that these patriots kicked the toxic can of race problems down the road for generations (listen to the mixtape for the third cabinet battle; it was left out the show), and we still don’t have all the answers. On a positive note, the line “immigrants—we get the job done” during “Yorktown” earned cheers from much of the audience.

In “Wrote My Way Out” on the mixtape, Miranda gives us some great new lines. Referencing In the Heights, he says, “I know Abuela’s never really gonna win the lottery. So it’s up to me to draw blood with this pen, hit an artery… and shine a light when it’s gray out.”

Hamilton is indeed a beacon in these murky times. When it goes on tour, I think you’ll get a great show. When the rights become available, I hope Aurora Theatre is the first in Georgia to do it, since its In the Heights was fantastically Broadway-worthy (Usnavi, Diego Klock-Perez, would be an amazing Hamilton). There is so much theater in Georgia, within five or 50 miles from your door, that is as good or nearly so as what you can find in NYC—plus more productions that, if not up to the production levels of Broadway, provide top-notch experiences with all the laughter or tears or thoughts as you could wish. It was absolutely worth making a trip to New York to see Hamilton, but there’s a lot of great stuff closer to home, too. Theater is thriving all over the place.