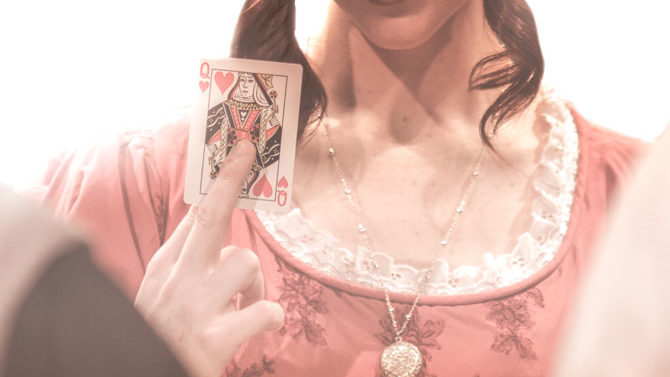 You Can’t Take It With You: Imagine a home where a big, happy family, embracing each other’s eccentricities and special interests, coexists in a big, comfortable, oddball house while they each follow their bliss. It helps that there’s plenty of money and not much trouble, but they also aren’t paying their taxes. This Pulitzer-winning piece of American theater history and nostalgia, originally debuting in 1936, can give seasoned actors a chance to shine, and this production, directed by Bryn Adamson, has one of Town & Gown’s favorite patriarchs (Rick Rose) at the head of this screwball family. Ben Brantley of The New York Times wrote glowingly of the 2014 revival as “one of the most persuasive works of pure escapism in Broadway history… naïveté is this show’s oxygen and its strongest selling point, and Hart and Kaufman conjured it with master craftsmen’s shrewdness.”

No one in this family is particularly talented or skilled at their passions, but no one worries about that. Granddaughter Alice Sycamore (Bailey Adams) does wish they would try to seem something like normal when the uptight parents of her fiancé Tony Kirby (Ethan Laughman) come over to dinner. Perhaps the Sycamores (Skip Hulett and Lucy Haskil) could have pulled it off if the Kirbys (Don R. Smith and Leslie Kimbell) hadn’t shown up on the wrong night, but would the story of a mismatched meeting of families be so fun if they had?

Vanity Fair: Becky Sharp (Atalanta Siegel) is a woman relentlessly striving to reach the top, starting as a charity case at a school with young ladies of privilege. Sweet, naive Amelia (Emily Willet) becomes Becky’s ticket out of poverty and obscurity when she invites her friend to visit her home. Becky has good looks and intelligence, and doesn’t let scruples get in her way as she charms and manipulates anyone who might be worth her effort—especially men. Thackeray’s novel about Becky’s cycle of rise/fall/repeat has been adapted many times, most recently with an Amazon Prime miniseries. Alexis Soloski of The New York Times declares the 2017 adaptation by Kate Hamill to be “a gift to actors and a goody bag for its audience.” Soloski labels Becky a “sociopath… She is also a lesson in how exciting it can be when women do things and want things and get them.”

In an interview with Nelson Pressley of the Washington Post, Hamill expresses her frustration with the usual roles for women, who have so often been mere props in the male protagonists’ stories rather than “women I knew in life. They were not funny, or vulgar, or flawed. So I’m really interested in creating characters where I don’t care if they’re likeable. I care if we understand them.” Hamill’s “radical approach” to adaptation—as she has done with Sense and Sensibility and Little Women—aims to be more of a collaboration with a dead author, making something new. With this play, she portrays Becky and Amelia as “more honest, human women” who aren’t just the “bad” and “good” ones, but who encounter the same ups and downs while being judged by social standards they can never meet. “It’s about women trying to get what they want in a society that judges them.”

UGA Theatre’s production is directed by David Saltz, who considers Hamill’s adaptation as “far and away” his favorite. It embraces the theatricality of the novel, setting the action on a modern London street, enacted by traveling performers who, except for Willet and Siegel, play multiple roles. “It provides a fascinating glimpse of 19th Century culture and mores,” he says, “that at the same time feels completely fresh, edgy and contemporary.”

Detroit ’67: Siblings Chelle and Lank have inherited their family house and decide to bring in some extra funds by converting the basement into a late-night bar. Lank and his best friend, Sly, are hoping to eventually open a real club with their earnings, but Chelle has a child to put through college and would not be likely to support their secret plan. Additional complications arise when Lank and Sly bring home a white woman they have rescued from an attack. She decides to stay and help out at the bar, and Lank starts to fall for her.

When it debuted at the Public Theater in 2013 in collaboration with the National Black Theater and the Classical Theater of Harlem, Charles Isherwood of The New York Times called it a “tidy drama that uses the riots that roiled the title city as the background to formulaic stories… [blending] sentiment and social history in roughly equal parts.” The underground club can be expected to add favorite Motown hits of the era as well. Space is limited in the intimate Arena Theatre, so get there early to be sure to secure a seat.

Detroit ’67, by Dominique Morisseau, is presented by the Black Theatrical Ensemble in the Arena Theatre of UGA’s Fine Arts Building Feb. 21–22 at 7:30 p.m., with a 2:30 p.m. matinee Feb. 22. Tickets are $12 or $7 for students. For more information, email bte@uga.edu or follow @ugabte on social media.

Mama Won’t Fly: This wedding is a Very Big Deal, but it’s in California, and Mama (Linda Oulton) absolutely will not get on a plane, even for her son’s wedding. It’s up to his sister, Savannah (Andrea Barra), to get her there, and that means giving in to Mama’s insistence on making a four-day road trip for mother-daughter bonding. Then there’s the last-minute addition of the daughter-in-law-to-be (Jamie Allen) and a lot of characters with silly names getting into silly situations. Can the women—and the car—make it all the way to the wedding through Louisiana, Texas and Las Vegas in time? Directed by Samantha Webb, this comedy features a sizable ensemble to play a variety of characters in settings ranging from a bra museum to a wedding chapel and, hopefully, a California beach wedding.

Decaf Comedy: It’s not just an open mic comedy series held the second Tuesday of each month at Hendershot’s Coffee, but also a series of booked comedy performances. On Feb. 25, they’re hosting comedians from Athens and Atlanta for a fundraiser performance to benefit End the Backlog, an organization that works to get a years-long backlog of rape kits processed before the statute of limitations runs out. For more information, check these funny folks out on social media at @decafcomedy.