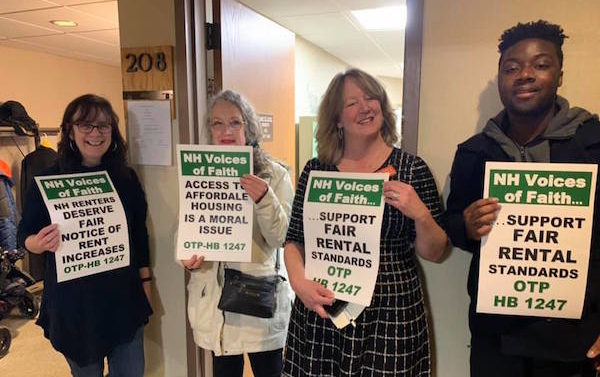 Laura Mick wants to know what your voting plan is.

It is 11 a.m. on the bitterly cold Sunday morning prior to the New Hampshire primary, and the 42-year-old Granite State native is carefully navigating the inch of ice on the sidewalks of Manchester’s low-income, heavily immigrant 5th Ward in order to remind its residents to vote. And to remind them that, even if they are convicted felon or haven’t yet registered, they can still vote in the primary. Also, they can get a ride if they need it.

A canvasser with the New Hampshire Interfaith Action Fund, an affiliate of the Granite State Organizing Project (GSOP), which unities “religious, labor and community organizations rooted in faith and democratic values” and advocates for “policies that will build community across difference and promote a just society for all the people of New Hampshire,” Mick can relate to how tough it is to make it to the polls.

GSOP and NH Interfaith Action Fund may technically be her employers, but Mick sees her work with them as more than just a job. Mick is committed to its message of social and economic justice.

“[GSOP] was a place I could go to be heard and feel at home. Being heard is something that is really important to me.”

Mick and the NH Interfaith Action Fund are part of a much larger movement of liberal and progressive faith-based political organizing, broadly deemed the Religious Left. The Religious Left is “small but loud,” according to a recent study by Professors Paul A. Djupe and Ryan P. Burge of Denison University and Eastern Illinois University respectively. More so, they are “the most active group in American politics,” according to the study. Americans who are both very liberal and attend church weekly participate in more political activities by far than counterparts on the opposite end of the political spectrum.

As a New Hampshire native, politics played a prominent role in Mick’s life from a young age. Her mother would take her to political rallies in the nearby town of Derry as a child, but it wasn’t until after she moved to Manchester and witnessed the political excitement around the presidential primaries that she really started to get involved in political activism.

More than just the spectacle of politics that drew her in, for Mick, the political is deeply personal. She deals with chronic health issues, has been underemployed for the last three years, and has lost two important people to overdoses. Canvassing for healthcare reform was what got her hooked on doing this draining work—walking for miles, knocking on the doors of strangers, and more often than not getting no response from her outreach.

Mick had 83 doors to knock on and 115 individuals to try to connect with on Sunday. During the hour-and-a-half that I shadowed her, very few knocks or rings elicited a response. A handful of doors did open to us, only to have their occupants tell Mick that the people she was looking for had moved. Mick told me that on any given day she usually only connects with 4 or maybe 5 people. She gave me this seemingly demoralizing statistic breezily—for her, all this work is worth it.

Mick was not the only NH Interfaith Action Fund employee who was hard at work spreading the gospel of enfranchisement on Sunday morning. Modris Kruminsh, an immigrant from Latvia, had his own patch of the city to cover. He immigrated to the United States as an adult and often returns to his country of origin. Kruminsh is alarmed by the growing wealth gap in the United States, and the lack of universal healthcare and other social safety nets that exist in Latvia but not here. So he too has decided to brave the cold in order to make sure the citizens of his adopted country have their voices heard.

Viola Katusiime, GSOP Lead Organizer, was also getting out the vote, specifically among the faithful. She spoke at two local churches that were holding worship services that morning, Christ Kingdom Church and Divine Wisdom Church. Both congregations are comprised primarily of Liberian immigrants and refugees, who number only a few hundred individuals in this city of approximately 100,000. However, it is crucial to reach out to immigrant populations, as first and second generation Americans are less likely to vote than those who are third generation or higher. According to Katusiime, most get-out-the-vote efforts only target voters who are already very likely to vote.

The GSOP and NH Interfaith Action Fund don’t endorse candidates, they only endorse voting. As an interfaith coalition, they also don’t proselytize or speak in terms usually associated with faith-based political action.

“The biggest misconception about progressive people of faith is that not wearing religion on your sleeve means it’s not important to you. Westboro Baptist Church’s faith is not more real because they scream the loudest about it,” Guthrie Graves-Fitzsimmons, a fellow at the Faith and Progressive Policy Initiative at the Center for American Progress, told BINJ. “Many progressive people are deeply motivated by their faith and don’t want to beat others over the head with it.”

Mick attends her Congregationalist Church weekly, and sees her work as an extension of her faith. On primary day, she is committed to making sure everyone who needs it has a ride to the polls on what is predicted to be a cold, wet morning and afternoon.