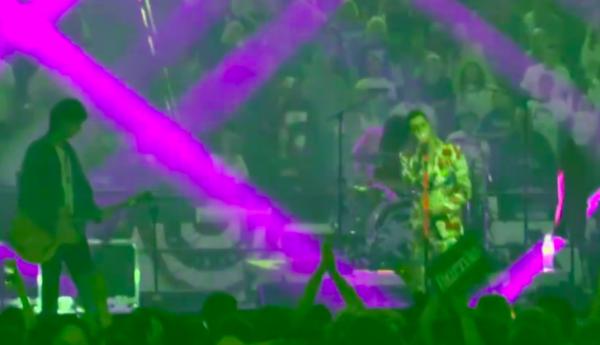 As a primary that kicked off in disarray wraps up in New Hampshire, presidential candidates raced across the Granite State for the last time Monday night.

On the final evening before people hit the polls, Vermont Sen. Bernie Sanders held the largest rally of the week.

The crowd of more than 7,500 erupted through the candidate’s stump speech decrying the power of elites, the absurdity of the American health system, the influence of corporations and big money in politics, the failed war on drugs, and rapidly accelerating income inequality.

Booked as a “Bernie beats Trump”rally, Sanders and his surrogates also aimed to drive home the idea that he is best suited to take down the incumbent in November. A poll released the same day by Quinnipiac shows Sanders up eight points over Donald Trump, and leading the Democratic field nationally.

“The working people of this country deserve something better,” Turner said. “Senator Sanders is that champion.”

“I want us to talk about this moment here tonight, on the eve of the New Hampshire primary,” Ocasio-Cortez said. “We have a choice to make, and it is important for us to realize that choice tomorrow, and to do everything that we can to expand the electorate and to expand our democracy.”

Ocasio-Cortez came to national prominence after beating establishment-linked Rep. Joe Crowley in 2018 in the highest-profile victory of the American left since Sanders’ 2016 campaign. Along with Reps. Ilhan Omar (D-MN) and Rashida Tlaib (D-MI), Ocasio-Cortez gave Sanders’ campaign what has proven to be a crucial boost in the wake of an October heart attack that looked like it would derail his candidacy.

Former South Bend, Indiana, Mayor Pete Buttigieg has surged since Iowa, where he was declared the victor of a narrow race for the most state delegates. With the win, Buttigieg picked up two more delegates than Sanders to the national convention.

The chaos of the Iowa caucus has largely rebooted the New Hampshire primary. Like Iowa, polling has been volatile, with Sanders and Buttigieg jostling for the top spot.

“Not only is the whole country watching New Hampshire,” Sanders said, “but the whole world is watching.”

Earlier in the day, dozens of Joe Biden supporters lined up for their chance to meet and question the former vice-president at a get-out-the-vote rally in Gilford as “Won’t Get Fooled Again,” a 1970s rock epic by The Who about the disillusionment of promised political change, echoed over the PA.

As his campaign for the presidency flails to stay afloat in the Granite State, Biden has stuck to his message—not of a “political revolution,” or “big structural change,” but a return to normalcy and “decency.” He doesn’t beg for votes. He doesn’t compromise on his centrist centrist platform. And if you don’t like him, Biden will respectfully direct you to another candidate.

Weaving anecdotes and tales of his upbringing and tribulations through his attacks on Donald Trump, Biden delivered a stump speech explaining why he is the safe choice to unseat the incumbent. He hit Trump on economics and foreign policy, but zeroed in on the president’s bombastic and offensive personality.

Jacob Cartin, a Biden supporter, is drawn to the candidate’s sincere posture.

On the trail, Biden and his surrogates tie him closely to his experience with the Obama administration, emphasizing his role in its achievements.

“Joe was the person who stood along with Barack Obama on the House and Senate floor,” said Rep. Carol Shea-Porter (D-NH). Shea-Porter noted Biden’s work on the response to the 2008 financial crisis, the Violence Against Women Act, and the Paris Climate Accord.

“This is not the time to have a first date with a foreign leader,” she said.

Biden suffered a tough fourth-place finish in Iowa, and has bluntly downplayed a potential stumble in New Hampshire.

“I took a hit in Iowa and I’ll probably take a hit here,” Biden said at the Democratic debate Friday.

Biden is placing much of his primary strategy on winning big in the south.

Socialism Is on Trial in the New Hampshire Primary