Socialism Is on Trial in the New Hampshire Primary 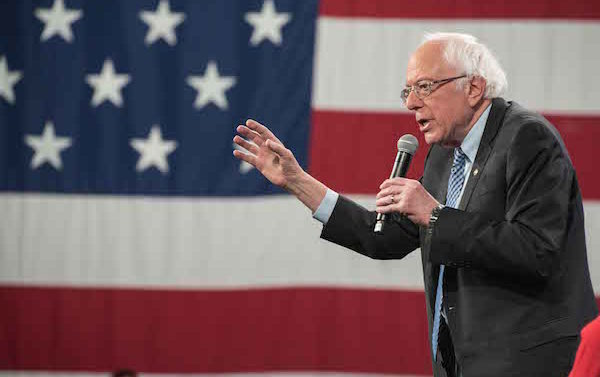 Sen. Bernie Sanders speaks at a debate Friday in Manchester.

Friday night’s debate in Manchester kicked off with a discussion on the political viability of “democratic socialism” in American elections.

Moderator George Stefanopolis asked candidates whether the acceptance of the label by Vermont Sen. Bernie Sanders would damage the chances of Democrats winning back the White House and Senate in November.

While none of his opponents explicitly said the label would be a detriment in the general election, members of the field’s more conservative wing emphasized the risk in nominating a candidate as left wing as Sanders.

“Bernie and I work together all the time, but we’re not going to be able to out-divide the divider-in-chief,” Sen. Amy Klobuchar (D-MN) said after indicating that she would be concerned with having the democratic socialist at the top of the ticket.

“I think we need someone to head this ticket that brings someone with her instead of shutting them out,” she said. “And when I look at at a state like New Hampshire, that had a very close election last time in 2016, I see a state that, yes, had a high turnout of fired up Democrats … but I add to that being able to bring in independents like you have in this state as well as moderate Republicans.”

The Overton window has shifted significantly over the past 10 years, and while most older voters still view the concept of socialism in a very negative light, the ideas and policies being pushed by the Democratic Party’s progressive wing have become increasingly popular.

At an Elizabeth Warren event Thursday in Derry, New Hampshire voter Joel Rosen said that he had gone back and forth between supporting “someone with a vision and someone more moderate” before backing the Massachusetts senator.

“It’s better to try something big and fail than small and fail,” said Rose, whose top issue is the national debt. “Moderates aren’t electable anyway.”

The debate in the media about the electoral viability of a candidate representing the Democratic Party’s left wing has mostly escaped voters on the ground in New Hampshire. But while the socialism and left-wing populism linked to politicians like Sanders isn’t noticeably driving fear into many voters—Sanders has held the biggest rallies of any of the Democrats up here—it has worked to galvanize Dems who have long seen their politics pushed to the margins.

“The things we’re talking about with Sanders are things I’ve wanted my whole life,” said Massachusetts Rep. Mike Connolly, who has been campaigning for Sanders in New Hampshire.

“To see all the people come out to these [Sanders] events gives you an incredible amount of hope.”

Most on the left agree that the fear-mongering of socialism will fall flat for a few reasons. The first is that, for at least the past 15-20 years, the American public has witnessed what leftists call “socialism for the rich.”

“We already have a socialist government” for large corporations and big banks, documentary filmmaker Michael Moore said at an event with members of the podcast Chapo Trap House in Manchester, alluding to large-scale bailouts that saved the financial industry in the wake of the 2008 crisis.

Another reason, and one which is broadly accepted across the political spectrum of the Democratic Party, is that because Republicans have so relentlessly labeled everything to their left, from the Affordable Care Act to voting rights legislation, as socialism.

“That idea has lost its power when you think about the way it was applied to characterize the Affordable Care Act,” Democratic presidential candidate Pete Buttigieg told CNN last year. The former South Bend, Indiana mayor continued, “Invented by a conservative think tank, relying on market principles, implemented first by a Republican governor, and they said that was socialist. So I think the word has mostly lost its meaning.”

A third reason is the fast realization for working people that many policies being promoted as progressivism, leftism, or socialism would translate to having more stability and say over their own lives.

Polling shows socialism to be ascendent in the US, at least among Democrats and young people.

Trump has based much of his reelection strategy on tying his Democratic opponent to left-wing radicalism.

If he’s the nominee, Sanders’ answer to skepticism among older Americans is to drive up participation, particularly among younger voters.

“At the end of the day,” Sanders said at the debate, “I believe that the way we beat Trump is to have the largest voter turnout in the history of this country.”

Brian Patterson Says He’s Ready to Take Over as DA