Darkness, Light and Lots of Cheer: Local Plays to See This Holiday Season 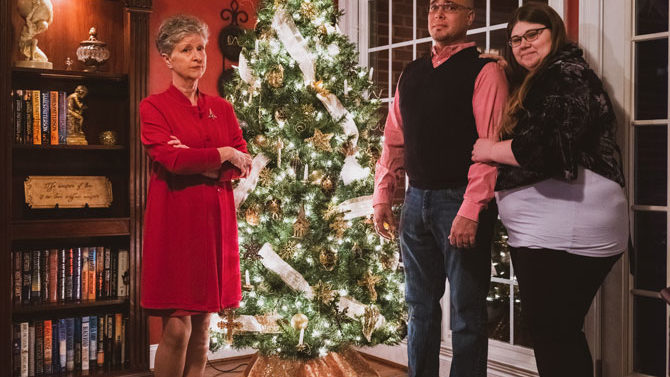 Home for the Holidays: One of the best things about Christmas is the music, and the Next Act musical theater troupe has a night of your favorites that’s appropriate for all ages. It’s a great way to kick off the holiday season the night before the Downtown Parade of Lights. Home for the Holidays is presented by Next Act at Hendershot’s Wednesday, Dec. 4 at 7 p.m. Tickets are $5 and available at the door. For more information, follow @UGANextAct on social media or visit facebook.com/UGANextAct.

Grease: Before it became a hit movie starring Olivia Newton-John and John Travolta in 1978, it was a Chicago-born cult success story that made it to Broadway in 1972 and received seven Tony Award nominations. Teenagers have loved this show for so many decades it hardly needs introduction: There’s a high school gang of leather jacket and hair-grease wearing, low-class boys and the trashy girls called “Pink Ladies” who sometimes date them. Then, the nice-girl exchange student (Sandy, played by Caroline Bell), enrolls in school, where her summer romance (Danny, played by Caleb McArthur) is afraid to admit to his fellow greasers that he even knows her. It’s a play seething with teen angst and hormones, big dance numbers, transformations and beloved songs.

The ReGifters: Re-gifting is a less acknowledged but familiar holiday tradition: wrapping up a gift we’ve received but can’t use (or don’t want) and giving it to someone else. Plus, hoping the receiver never knows it’s a re-gift. In The ReGifters, the Henshaws (Vicki Wrobel and Murray Weed) have received a truly hideous and baffling gift that seems useless, even if it’s possibly “art.” They wrap it back up and give it to their neighbors, the Mulligans (Kerri Brooks and Jason Baird), who turn around and re-gift the useless thing to the Cunninghams (Tara Runyon and Jake Strength, with Paige Hood as the mother-in-law an audience loves to hate). The real fun begins when the Henshaws later learn the awful thing is worth a fortune. Director Amy Miller has also added young Christmas carolers to appear at the doors of the families to add to this story of over-commercialization and dysfunctional family relationships at Christmastime. Miller says, “People are going to recognize themselves. Plus, the script manages to be clever and witty while remaining warm-hearted.”

Jekyll & Hyde: Not everything during the holiday season has to be about the holidays or even be cheerful. If you want to let your inner Grinch free, here’s a chance to revel in the darkness of the gothic pop-opera horror-drama that tells the story of Dr. Henry Jekyll (Nick Ciarochi), who struggles with the question of good and evil that exists in all people. Can the two impulses be separated and mental illness cured, especially that of his father? Are those who appear to be governed by goodness merely putting on a façade of it to the public? He’s engaged to be married to a very nice girl of good family (Sam Ewing), but then there’s the hooker with a heart of gold who inspires his work (Hannah Hardin). When he conducts his experiments and his bad side takes the driver’s seat as Mr. Hyde, things take a dangerous turn towards darkness.

One of director W. Steven Carroll’s specialties is in classical horror, and he’s assembled an experienced production team along with a cast of T&G mainstays and newcomers to play the people of London for his 20th production directed at Town & Gown.

Best Christmas Pageant Ever: A picture-perfect small town meets its match when “the worst kids in the history of the world” show up to audition for the Christmas pageant. Church mom Grace got guilted into the thankless job of last-minute director, knowing she’ll be judged by the congregation no matter what she does and inevitably found wanting. Then, the biggest bullies in town, the Herdmans, take over all the best parts, and she is powerless to prevent it.

There’s room for the characters to show compassion and growth as this middle-class congregation learns to include children who are community outsiders from a low-income family, and who have a background for their misbehavior. The kids also provide a lot of laughs, as when Imogene Herdman, who insists on playing the role of Mary, is shocked by the story of the mother-of-Jesus-to-be, saying, “Where is her social worker?” The kids of Winder-Barrow Community Theatre bring the fun and the Christmas spirit to this show that aims to entertain both kids and grownups.

Best Christmas Pageant Ever, by Barbara Robinson, is presented by Winder-Barrow Community Theatre’s Children’s PLAYhouse at the Colleen O. Williams Theater in Winder Dec. 6 at 7:30 p.m., Dec. 7 at 1:30 and 7:30 p.m. and Dec. 8 at 3 p.m. Tickets are $10, $5 for children 12 and younger and available at winderbarrowtheatre.org.

It’s a Wonderful Life: A Live Radio Play: An energetic group of thespian friends have started a new, all-inclusive troupe to bring more variety and performance options for theater lovers in Jackson County and beyond called Rogue Spirit Productions. They also just wrapped up a Murder Mystery Dinner Theater Trolley Ride in partnership with the city of Braselton, with hopes of doing it again next year.

This month, it’s the holiday staple It’s a Wonderful Life presented as a 1940s-style radio play, in which actors in a radio station “broadcast” the story of George Bailey (Richard Hoard). It’s Christmas Eve, and George is questioning whether life is worth living when he’s given up on his own dreams to help others instead. His guardian angel, Clarence (Chuck Miller), works to show him the value of the choices he’s made in life and his positive effect on the community, turning a sad story into a happy one just in time for Christmas.

It’s a Wonderful Life: A Live Radio Play, adapted by Joe Landry from The Greatest Gift by Philip Van Doren Stern, is presented by Rogue Spirit Productions at the Jackson County Historic Courthouse Dec. 13–14 at 7 p.m., with a 2 p.m. matinee Dec. 15. Tickets are $10 and available at roguespirit.weebly.com.

There’s also a chance to see a different production of the same show in Athens, featuring an all African-American cast: Daja M. Rice, Rachael Simpson, Justin Hall, Pedro Alvarado and Darrell Grant. Director Thomas Brazzle, new to the Morton Theatre board, says that they hope to be producing more of their own shows while continuing to serve as a venue for other groups, events and touring productions.

“We would like to use our programming committee to start producing Morton-produced works that speak to the history of the Morton as a vaudeville venue, but also to the African American/black experience as well.”

2019 Holly Jolly Holiday Spectacular: This variety show features the ALP kids singing, dancing and acting with a Gingerbread Host. It’s a show for all ages, with possible audience participation, and is designed to “bring the Holly and Jolly to everyone.” It’s presented by and at Athens Little Playhouse Dec. 20–21 at 7 p.m., with a 3 p.m. matinee Dec. 22. Tickets are $10, $5 for children 12 and under and available at the door.