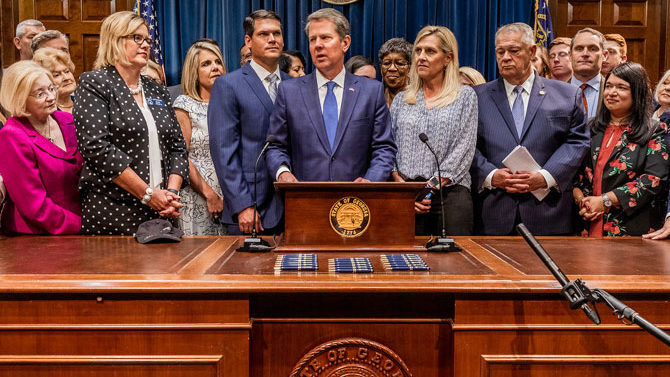 Gov. Brian Kemp signed one of the most restrictive abortion laws in the nation May 7, which will ban abortions after six weeks of pregnancy—when Republicans say a fetal heartbeat can be detected. The law is set to go into effect on Jan. 1.

The law’s language has created confusion, and much of its effect will likely be decided in the courts. So what does it actually do?

Bans most abortions after six weeks: In Roe v. Wade, the Supreme Court ruled that states can only restrict the abortion of “viable” pregnancies, meaning the fetus can survive outside the womb. That’s generally considered somewhere around 24 weeks.

In 2012, the legislature passed the “fetal pain bill,” sponsored by former state Rep. Doug McKillip (R-Athens), that outlawed most abortions after 20 weeks—the point at which he said fetuses can feel pain, although many experts disputed that. The law carried a penalty of up to 10 years in prison for doctors who performed an abortion past the 20-week mark.

While other, similar laws have been overturned in federal court, and a Fulton County Superior Court judge initially blocked it from taking effect, the Georgia Supreme Court threw out an American Civil Liberties Union lawsuit, ruling that the state has “sovereign immunity,” meaning it can’t be sued. A federal lawsuit was never filed.

The 2019 law takes the 2012 version even further by outlawing most abortions after six weeks—a point at which embryos are a half-inch long, and many women don’t yet know they’re pregnant. At six weeks, the “fetal heartbeat” that proponents claim is a sign of a living human being is really just electrical activity in a cluster of cells that will eventually become the cardiovascular system. The heart doesn’t actually start pumping blood through the body until the baby is born.

Unlike a similar law in Alabama, Georgia’s includes exceptions for “medically futile” pregnancies—where a defect detected in the womb would prevent a baby from surviving after birth—as well as rape and incest. For the latter two, however, women must first obtain a police report.

Recognizes an “unborn child” as a Georgia citizen: The new law also claims modern science has demonstrated “unborn children are a class of living, distinct persons” and called for “more expansive state recognition of unborn children as persons,” laying a legal groundwork for the 2019 abortion law. It specifically claims that “modern science” did not exist when Roe v. Wade (1973) and Planned Parenthood v. Casey (1992) established current abortion rights. So, the wording of the law sets it up to challenge those precedents.

By classifying an embryo as a Georgia citizen, it gives the embryo protections under the state constitution and allows parents to declare it a dependent for tax purposes. The law also allows mothers to start collecting child support to cover medical bills while she is pregnant.

The law quotes the 14th Amendment by stating, “nor shall any State deprive any person of life, liberty, or property, without due process of law; nor deny to any person within its jurisdiction the equal protection of the laws.” By citing the U.S. Constitution, the law makes it a crime to deprive an embryo of life, since it classifies a six-week-old embryo as a person.

Making embryos citizens may have some unforeseen consequences. According to Andrew Fleischman, an Atlanta trial lawyer, “Georgia is now holding thousands of citizens in jail without bond in violation of their rights.” Since they’ll be considered citizens, the embryos and fetuses of undocumented immigrants could also be eligible for health care and other benefits, even though the women carrying them aren’t.

Makes abortion a crime: The most difficult part of the law to clarify is whether or not a woman can be prosecuted for having an abortion.

Opponents of the abortion law have speculated that a woman who self-terminates her pregnancy will have committed murder and will face the punishment under state law, including life in prison or the death penalty, and that women who get an abortion through a health-care provider could be found guilty of being a party to murder.

State Sen. Jen Jordan (D-Atlanta), a lawyer and one of the most prominent critics of the new law, told Slate that it criminalizes abortions for both women and doctors. The bill lays out a specific defense for women, saying they’re not guilty if they believed an abortion was the only way to avoid a medical emergency. “If there was any doubt in terms of opening up women to prosecution, all you have to do is look at the affirmative defense added to the bill,” Jordan said.

In combination with the new abortion law, a 1998 court case involving a woman who shot herself in the stomach while eight months pregnant also opened the door for potentially investigating women who miscarry, according to Jordan. About 10–20% of known pregnancies end in miscarriage, according to the Mayo Clinic, although the number is likely much higher, since many women have miscarriages so early in pregnancy that they are unaware they were pregnant.

Supporters deny that women will be liable for abortions or miscarriages. Conservative pundit Erick Erickson pointed to that same court case, Hillman vs. State, in which the court noted that Georgia law has banned prosecuting women for having abortions since 1976 and ruled that a woman can’t be charged with a crime for a death in utero. State Sen. Renee Unterman (R-Buford), one of only two Republican women in the Senate and the only female senator who voted for the bill, tweeted to an Atlanta Journal-Constitution reporter last week and clarified that “the law targets abortion providers, not women.” The bill’s sponsor, Rep. Ed Setzler (R-Alpharetta) has said his intent was to allow doctors, nurses and pharmacists to be prosecuted under Georgia’s criminal abortion statute, which carries a penalty of up to 10 years in prison.

But the law does allow the district attorney of the judicial circuit where the abortion took place or where the woman resides to have access to the woman’s health records.

What’s Next: A legal battle over the law is imminent. Abortion rights supporters, including the American Civil Liberties Union, have vowed to challenge the Georgia law in court.

Backers of the law have stated they are prepared for the costly legal battle to challenge Roe v. Wade. “Our job is to do what is right, not what is easy. We are called to be strong and courageous, and we will not back down,” Kemp said when signing the bill into law.

Georgia is not the first state to pass a so-called heartbeat bill. Mississippi, Ohio, Kentucky and Alabama have passed legislation similar to Georgia’s “Living Infants Fairness and Equality Act,” and Missouri and Louisiana are considering it.

Kentucky’s legislation is being temporarily blocked by a federal court, and previous attempts to pass heartbeat bills in other states were struck down as unconstitutional. While most legal experts believe these laws will be struck down as well, with Justice Brett Kavanaugh replacing the more moderate Anthony Kennedy and giving conservatives a majority on the Supreme Court, the possibility that Roe v. Wade might be overturned is real.