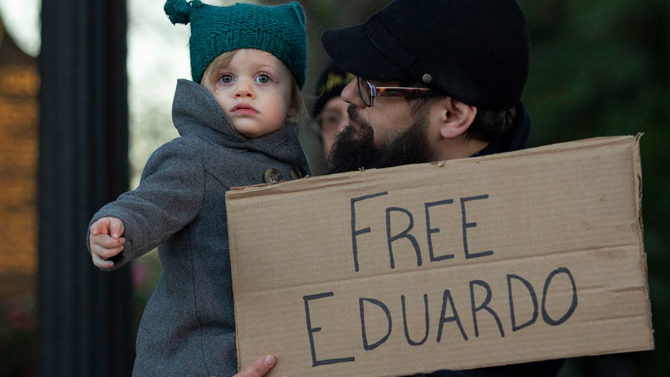 Five years ago, Eduardo Samaniego, a nationally known immigrants’ rights activist, stood in front of the Arch protesting the University System of Georgia’s policy that barred him from enrolling at the University of Georgia because of his immigration status. He led a group of protestors to Terrell Hall and staged a sit-in outside the president’s office that turned into “a joyful celebration of dancing and speaking minus the police and administration,” said Claire Bolton, Samaniego’s friend who attended the protest.

Last week, roughly 20 people stood at the Arch with lit candles in hand demanding Immigration and Customs Enforcement release Samaniego from a privately run South Georgia detention center where he had spent the past three weeks in solitary confinement.

At a hearing Jan. 17, a judge granted him a continuance and ordered him transferred to a medical facility in Columbia, SC. Health has been a concern for Samaniego since 2015, when a gas explosion burned him over nearly half his body.

Samaniego, a native of Mexico, was originally detained in October after he was unable to pay a higher-than-expected cab fare that totaled $27. Authorities found he’d overstayed his visa. He was denied bail on Dec. 27, then moved to the Irwin County Detention Center in Ocilla.

“These immigration policies are just immoral. Everyone deserves to be in the U.S. I would have given [Samaniego] $27 if it meant he wasn’t taken in, and I don’t even know him,” said Rick Fyock, a participant at the vigil who held a sign stating, “Build bridges not walls.”

Sarah Black, one of the organizers of the vigil and a friend of Samaniego’s, said those close to his case claim he is living with no bedding, forced to eat with his hands and restricted from seeing or speaking to any friends or relatives. In addition, the Southern Poverty Law Center was refused access to Irwin for a wellness check on Samaniego. The SPLC has typically been able to conduct wellness checks on detainees in Irwin County.

Many believe his arrest was for more than just overstaying his visa, but also because he was a well-known immigrants’ rights activist. “He was so willing to be out front and leading the charge,” Bolton said. “Now that he is in detention, it seems his willingness to be out front really had something to do with where he’s at.”

Black said several in the national #FreeEduardo movement believe that since he is “a valuable member in so many communities and such a prominent leader,” ICE is intentionally fast-tracking his case. He has traveled across the country to give speeches about his experience not being able to get into UGA, even though the university recruited him. He was the student body president at North Cobb High School and graduated with honors in 2013. Eventually, Samaniego enrolled at Hampshire College in Massachusetts, where he continued his activism.

Samaniego has often appeared on CNN and other media outlets to speak about the movement and being an undocumented student. He also was involved in a lawsuit against the Board of Regents seeking to force it to charge undocumented immigrants who live in Georgia in-state tuition, rather than much higher international rates, at open-enrollment public colleges, but a judge ruled that the regents couldn’t be sued.

Black said she first met Samaniego while he was giving a speech at the Board of Regents office in Atlanta. In the middle of speaking to a crowd of protestors, he took off the cap and gown he was wearing to reveal his construction clothes underneath. “At the time, it was a really powerful commentary on how the ban on undocumented students who had DACA meant they were eligible to work here but not go to school,” Black told Flagpole.

Athens-Clarke County Commissioner Tim Denson said that, when he met Samaniego in 2014 at the protest in front of Terrell Hall, he was “so impressed with his willingness to put himself on the line and fight for justice.” The activism of undocumented would-be UGA students was “a pivotal thing for me,” Denson added.