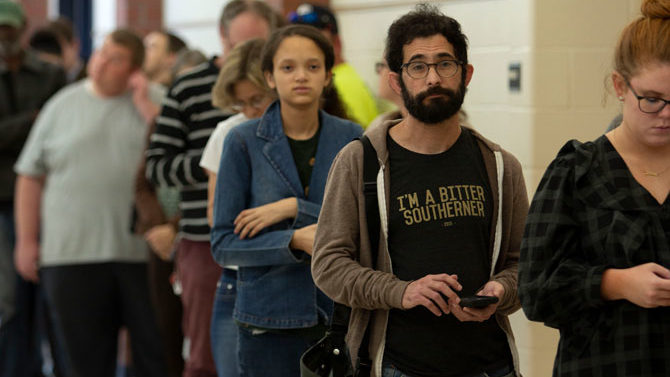 Unexpectedly long lines, voting machine and poll worker shortages, and results that weren’t fully reported until the next day—these are just a few of the problems Athens encountered this election.

Overall, Clarke County had a voter turnout of 62 percent, and some believe turnout would have been higher if the Athens-Clarke County Board of Elections had been better prepared. Charlotte Sosebee, the BOE’s director of elections and voter registration, said her turnout projection was around 50 percent based on the 2014 midterm election.

In most of Clarke County, lines were short, and voting was simple. But it was a different story at Whit Davis, Whitehead Road and Gaines Elementary School, where voters waited up to two hours to cast their ballots. “The long lines absolutely depressed voter turnout,” said ACC Commissioner-elect Russell Edwards.

While Flagpole was interviewing voters at Gaines on Nov. 6, some people walked up, sighed and said they’d come back in hour or so. However, the lines didn’t get much shorter as the afternoon went on. Most people stuck it out, though.

“I wanted my voice to make a difference,” said Delores Bolton, who waited in line for over an hour. “Trust me, I’m hungry. I just wanted to get out of line and get something to eat, but I knew I needed to vote.”

All three precincts that experienced long lines throughout the day were combined precincts. The Board of Elections combined 1B and 8A at Gaines Elementary, 5A and 5B at Whitehead Road and 1C and 1D at Whit Davis.

Sosebee said the main reason for the long lines was a lack of poll workers. On the day of the election, Gaines Elementary alone had three poll workers call in, she said. Up until the Friday before Election Day, the BOE was still recruiting workers, she added.

Jesse Evans, a BOE member, said it was more than the lack of poll workers. “We need more machines. We need better machines and more staff,” Evans said. “We have a budget coming up, and we may need to ask for more funding.”

Evans called that answer unacceptable. “We should be able to accommodate all of our voters,” he said. “Blaming the voter on Election Day is akin to blaming the victim. If someone wants to vote on Election Day, that’s their prerogative.”

The lack of resources also contributed to long lines during early voting. Roger and Barbara Dean experienced that firsthand. The Deans tried four times to vote early at both the BOE office and the library, and each time, the line wasn’t moving, so they decided to turn away. Meanwhile, they said their friends in Oconee County were getting in and out with no problems.

Due to lack of space in the BOE office, Clarke only provided six machines for early voting. According to Edwards, Oglethorpe County had 12 and Oconee 10. Both counties have a fraction of Clarke’s population.

“Well, how does the Clarke County Board of Elections run into a problem if they have their own machines and their own plan for handling the election?” Roger Dean said. “How do they run into these problems that Oconee County and other surrounding counties didn’t?”

Evans suggested opening an Eastside early voting location, which could have thinned out the crowds, but BOE staff argued the county did not have the personnel or funding for another location. “By the time the Eastside location had been brought to us, we did not have enough for what we had already consented to,” Sosebee said. “It was a last-minute proposal brought to us.”

In September, the BOE discussed Eastside early voting in an executive session. Evans said the board’s reasoning for closing the meeting to the public was that it was to discuss “personnel,” since a new voting location would require additional workers. County Attorney William Berryman said his office is looking into whether or not the meeting should have been private. The board is expected to receive results in December, Berryman said.

A total of 333 ballots had to be duplicated. Sosebee said she is speaking to their vendor to determine the problem.

In addition, 31 people returned ballots that incorrectly listed a write-in candidate for state Senate District 46. The BOE had sent new ballots to about 300 voters last month, when they noticed the error, and asked them to return those instead. Those 31 ballots were counted, except for the Senate race. On election night, counters also noticed that the Democratic candidate for Senate District 47, Dawn Johnson, was listed on a different page than the Republican incumbent, Frank Ginn.

Evans suggested at an Oct. 30 meeting auditing the election results—which would involve recounting a random sampling of votes—but the rest of the BOE shot down that proposal. “There have been people who have been very concerned about our secretary of state running for governor and [remaining] secretary of state,” Evans said. “This would be a very simple way to increase voter confidence in Clarke County.”