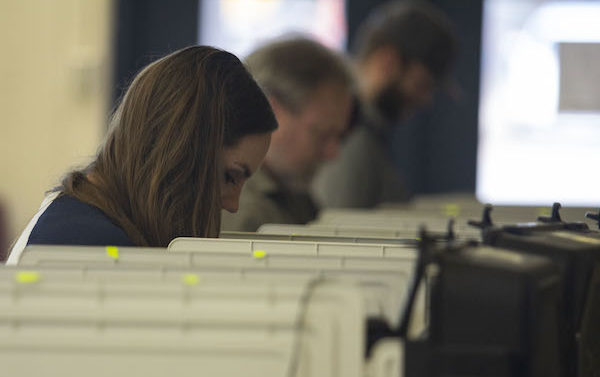 The Athens-Clarke County Board of Elections faces possible state sanctions after missing the deadline to certify election results because of a chaotic recount Tuesday that raised as many questions as it answered.

The “recanvassing”—prompted by petitions from three voters in eight precincts who were concerned about every vote being counted—started at 11 a.m. and was supposed to end at 2 p.m., but continued well past the 5 p.m. deadline for counties to certify their election results and deliver them to the secretary of state’s office.

Vote totals were uploaded around 6:30 p.m., said Charlotte Sosebee, the director of elections and voter registration. However, the election wasn’t certified until closer to 8 p.m. Documents were turned over to the Georgia State Patrol at 9 a.m. today for delivery to Atlanta.

Not only were all the votes counted on Election Day, the recanvassing revealed that too many were counted. Twenty-five mail-in absentee ballots were counted that should not have been.

It appears that some ballots were run through a scanner more than once on Election Night, said board of elections member Alison McCullick. Sosebee told Flagpole last week that there was a problem with paper ballots not scanning properly that forced election workers to duplicate and rescan 333 ballots.

Board member Jesse Evans, who pushed for the recanvassing, refused to sign off on the results.

However, it’s unclear if there really was a discrepancy, because Sosebee later said she was looking at a wrong report for comparison.

The results were still certified because two of the three board members present—McCullick and chairman Charles Knapper—signed off.

At a contentious meeting Monday night, the board set a 2 p.m. deadline to give Sosebee time to deliver the certified results to Atlanta by 5 p.m., and because McCullick was only available from 10:45 a.m.–2 p.m. Two other board members were out of town, so without McCullick, the board would not have a quorum.

After the recanvass was complete at 2 p.m., the three present board members reconvened to certify the recounted results from Howard B. Stroud, Clarke Central High, Lay Park, the multimodal center, Whitehead Road Elementary (which includes both 5A and 5B), Chase Street Elementary and Cedar Shoals High.

Then, the board and staff recounted all mail-in absentee ballots from the other 16 precincts, which put them behind the pace to meet the 5 p.m. deadline.

At 4:37 p.m. Sosbee said, “I don’t think we’re going to make it. We gave the people what they wanted. That’s the main thing. Now, we’re taking the bullet.”

Evans said his main concern is “making sure it’s right. [Sosebee’s] concern is that it meets deadline.”

The discussion among Sosebee, Knapper and Evans turned into a heated argument after Evans said—again—he would not certify the new voting results.

“We missed the 5 o’clock deadline, so what’s the excuse now?… I’m not going to trade integrity for expedience,” Evans said.

Sosebee warned Evans that the board of elections faced a hearing before the State Elections Board, a possible fine and potentially a lawsuit from the state attorney general’s office.

“I’m trying to get you to understand that [certifying on time] will keep us out of court. What you’ve been talking about we can deal with, but we’ve got to keep our butts out of court,” Sosebee told Evans. “I’m trying to get this in. It’s like me paying a late water bill. I’m going to do it as soon as possible, not two or three days later.”

Throughout the afternoon and evening, Evans butted heads with fellow board of elections members, staff and ACC Attorney Bill Berryman.

“I’m just trying to make sure this is done right. Now, they’re making me the bad guy. I was alone in there,” Evans said.

Berryman arrived to give last-minute legal input before the results were certified. He told Evans he would “bear the responsibility of not signing,” which could mean speaking before the state board if there is an investigation.

Moving forward, the board agreed they need a plan to address and count absentee ballots.

“It points directly to how absentee votes are counted on election night. Our strongest poll workers need to be working there,” McCullick said. Apparently workers who were new and inexperienced were counting the absentee ballots the night of the election.

As for provisional ballots, the board has accepted 43 and rejected 164, mainly because those voters are registered in a different county. Twelve more will count if the Democratic Party of Georgia wins a lawsuit seeking to count provisional ballots where issues were rectified, but after the deadline of 7 p.m. last Friday. Voters who cast a provisional ballot can call the board of elections at 706-613-3150 to find out if it was accepted.