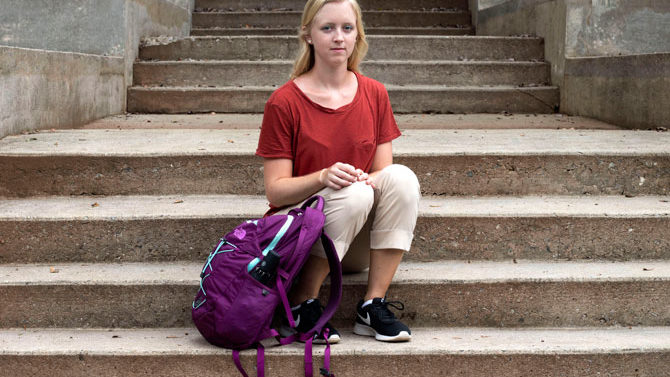 University of Georgia student Sherine Kullmann has lived in the United States for the majority of her life. Her family emigrated from Germany to Madison, GA so her father could start a solar energy company in 2007.

Kullmann attended Morgan County High School, graduating at the top of her class in 2016 with a grade point average of over 4.0. She was president of her school’s Key Club and the head of her section in band.

Despite this, Kullmann is not eligible to pay in-state tuition at the University of Georgia under state policy, nor is she eligible for HOPE or other scholarships. She must pay more than $30,000 out-of-pocket a year, since she is classified as an international student.

Kullmann expected, as many top students do, that her grades, test scores and extracurricular involvement would lead to a prestigious Georgia public university and enough in scholarships to cover her tuition. At least, that’s what she was told repeatedly throughout high school and when applying for early admission to UGA in fall 2015. “They told me I would be eligible for the Hope Scholarship and the Zell Miller Scholarship because I qualify for everything… the GPA, the test scores, the Georgia residency,” she said.

Unlike Georgia students who fall under the Board of Regents’ infamous Policy 4.1.6—which bars them from attending competitive-enrollment universities like UGA or requires them to pay international tuition at open-enrollment public colleges and universities because they lack documentation—Kullmann’s family came to the U.S. legally. The only thing holding her back from receiving scholarships to cover the cost of attending her dream school is her E-2 nonimmigrant classification.

E-2 visas are temporary and require holders to renew them every five years if they wish to continue residing in the U.S. Essentially, an E-2 visa allows a national of a treaty country to be admitted to the U.S. when investing a substantial amount of capital in a U.S. business, according to U.S. Citizenship and Immigration Services. In this case, the Kullmanns invested in and established their own business. Since E-2 is a non-immigration visa, the Kullmanns are unable to work toward permanent residency status. The visa is unlike a green card, which allows immigrants to live and work in the U.S. permanently. Both state-sponsored scholarships—HOPE and Zell—require recipients to be a U.S. citizen, a permanent resident or a green-card holder.

To obtain in-state tuition and Georgia residency, students are required to live in the state for a year prior to the first day of class. Kullmann has lived in Georgia for 12 years and is still fighting for in-state tuition.

In April 2016, Kullmann accepted an offer of admission to the University of Georgia. Not long after, she went to the Office of the Registrar and Office of International Education to figure out how her family could afford tuition. According to Kullmann, an Office of the Registrar representative told her he thought she should be able to receive in-state tuition, since she and her family had lived in the U.S. for nine years at the time. The representative suggested that Kullmann write a letter to UGA President Jere Morehead to ask for in-state tuition, she said. The same week, she sent the letter.

“Although my parents have been domiciled and operating a highly successful solar energy business in Georgia for 11 years, I do not qualify to pay in-state tuition because my family immigrated to the US on an E-2 Investor visa,” Kullmann wrote. In addition, she wrote that her family pays state property, income and sales taxes annually.

Two months went by with no response. Kullmann said she contacted the Office of the Registrar representative again, and he advised her to resend the letter with a note simply saying, “This is the second time I have sent my request. I’d like a written response.”

This time, she received a response—but not the one she was hoping for. “I have received and reviewed your request for the University of Georgia to waive the out-of-state portion of your tuition for the fall 2016 semester. After due consideration, however, I am unable to grant your request,” read Morehead’s response. He did not give a reason why her request was denied.

Less than two weeks later, the balance of her freshman-year tuition hit her student account—over $15,000 for just fall semester. “My parents can’t pay that money out of pocket. That’s an insane amount,” Kullmann said. “I wish people would have told us beforehand, because that maybe could have changed things… like where I would have gone to college.”

After spending her freshman year at UGA, Kullmann moved back alone to Germany—a country where she hadn’t lived since she was 8—because of the cost of attending UGA. The combined cost of her flight, living expenses and tuition in Germany was less than international tuition alone at UGA. However, after a year overseas, Kullmann moved back to Athens, because the quality of education at UGA is better, she said.

Greg Trevor, UGA’s executive director for media communications, said students holding E-2 visas make up a small proportion of UGA’s student body—a total of eight this semester. “In-state tuition is generally only available to students who can demonstrate U.S. citizenship, permanent residency or progress toward becoming a permanent resident,” Trevor said in an email. “The university can issue waivers granting in-state tuition to out-of-state residents under specific circumstances outlined by the University System of Georgia.”

Kullmann, meanwhile, said she hopes that by telling her story, she might convince the Board of Regents to change the policy for future Georgia students born overseas who want to stay in Georgia for college.

Editor’s note: The author and Sherine Kullman are currently roommates, but they did not know each other well when she began reporting on this story.