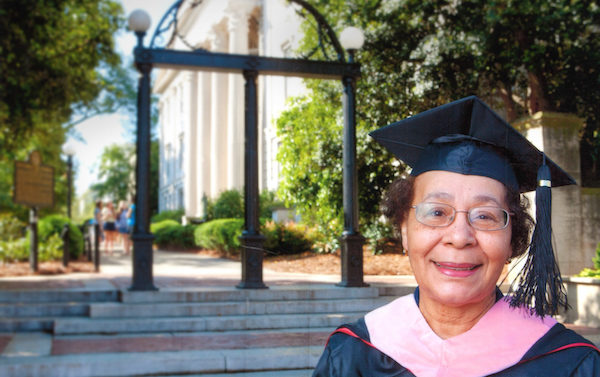 A documentary on the first black student to graduate from the University of Georgia will air on Georgia Public Broadcasting at 10:30 p.m. today and again at 11 a.m. Sunday.

Mary Frances Early: The Quiet Trailblazer premiered in Atlanta last week, and an on-campus screening is being arranged, according to the university.

The film was co-produced by Maurice Daniels, professor and dean emeritus of the UGA School of Social Work, and Michelle Cook, vice provost for diversity, inclusion and strategic initiatives. It is narrated by former WSB-TV anchor Monica Pearson.

Early grew up in Atlanta and graduated with a degree in music education from Clarke College (now Clark Atlanta University), then headed to the University of Michigan to pursue a master’s degree. But she was motivated to transfer to UGA when she saw the riots on TV over Hamilton Holmes and Charlayne Hunter’s admission in 1961. Although five years older, Early knew them both—all three had graduated from Turner High School in Atlanta.

“That same week, I applied to UGA,” Early said, according to a university release. “My mom wasn’t very happy about it, but she supported me. I felt I needed to open the doors of the grad school. I wanted to do something instead of just stand on the sidelines. You have to be an activist if you want to see change made. I was a very quiet person—an unlikely person to integrate UGA. But having grown up during a time when everything was separate but not equal—I was tired of that.”

Early earned her master’s degree in music education in 1962 and an education specialist degree in 1967. Holmes and Hunter (now Hunter-Gault) graduated in 1963.

Early was also awarded an honorary law degree in 2013 and received the President’s Medal in January. On Oct. 10, her portrait, painted by Richard Wilson, will be unveiled in the Administration Building.