What’s Up With Those Scooters That Suddenly Materialized All Over Athens? 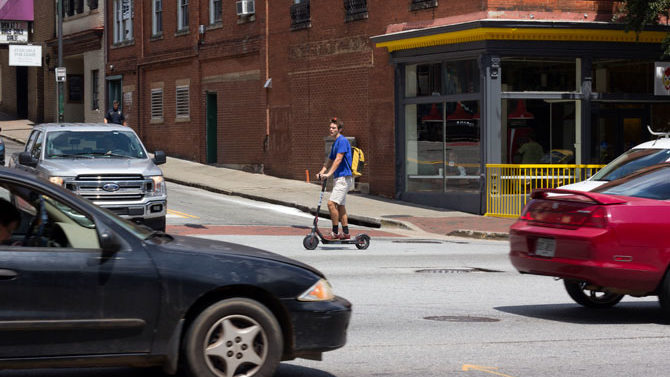 Common concerns about the new scooters are riders ignoring helmet requirements, riding scooters on sidewalks, disobeying local and state traffic laws and leaving scooters abandoned on sidewalks, roads and other areas where they could cause harm to bystanders.

Bird scooters are dockless electric scooters that can go up to 15 miles per hour, and give locals an alternative commuting option. The vehicle operates on the same lithium ion batteries that cell phones and tablets use, which require recharging daily. “The company or the company’s contractors scoop them up at the end of the day and recharges them for in the morning,” said Tyler Dewey, executive director of BikeAthens.

The scooters cost $1 to unlock with a QR code given on an app, and 20 cents per minute to ride, with a maximum charge of $9 an hour. Through the Bird app, riders are able to go step-to-step on how to rent, operate and park the Birds. First, users must find where the closest Bird is by using the tracking feature on the app. Then, the app advises them to bring and wear a helmet to abide by state law and not to ride on sidewalks.

“In the Bird app itself, it recommends that people ride them in the roadway, which suggests a larger problem that Athens needs a better network of bike facilities,” Dewey said.

UGA began impounding scooters last week, citing safety concerns “for those riding the scooters and for bystanders who might be hit by them or whose path might be impeded by an abandoned scooter,” university spokesman Greg Trevor said.

In addition, the scooters violate campus policy, he said. “Consistent with Transportation and Parking Services rules and regulations, any vehicle, including motorcycles and scooters, parked in an illegal or unsafe manner at any time is prohibited and is subject to violations and removal,” Trevor said. “Scooters left on sidewalks, grass, stairwells, decks or similar situations are also subject to violations and removal.”

UGA student Amanda Crites said she was about to hop on one of the scooters when a UGA Transportation and Parking Services employee walked up, took a picture of the Bird scooter in a campus bike rack and placed it in a university vehicle. Crites decided to take a picture of what she was witnessing. Soon after, the image went viral in the Overheard at UGA Facebook group.

The scooters will not be released until Bird pays its fines, Trevor said.

In an email sent to local users, Bird asked students to email UGA officials and petition to keep “the convenient and affordable means of sustainable transportation” on campus.

ACC Police Chief Scott Freeman said the department had been giving verbal warnings to Bird users who were not abiding by state and local laws—which require motorized scooter riders to wear helmets and prohibit driving on sidewalks and parking on sidewalks and driveways, in front of alleys or in the middle of the street—but has now begun ticketing riders who violate the law.

“Bird scooters are creating a lot of concern. Our concern, from the police side, is the Birds are everywhere. They were dropped here without any notification… It didn’t give us an opportunity to prepare,” Freeman said.

ACC officials have reached out to Bird about violations to county ordinances and state law, Montgomery said. “If Bird were parking these scooters on private property or parking spots, it wouldn’t be as much of a problem,” he said.

Athens is the second city in Georgia where Bird has begun operating, following Atlanta in May. Bird scooters are operating in over 20 U.S. cities such as Detroit, Nashville and the company’s hometown of Santa Monica, CA. Some city governments, like Denver and San Francisco, have banned scooters because of misbehaving riders, while other major cities, like Atlanta, have decided to implement stricter regulations for the dockless e-scooters.

ACC commissioners are currently considering new regulations in response to the influx of scooters. The commission’s Legislative Review Committee—chairman Jerry NeSmith, Allison Wright, Sharyn Dickerson and Mariah Parker—met Aug. 23 to discuss motorized vehicles on public property, such as golf carts, scooters, mopeds and segways. The committee—which recommends changes in legislation to the full commission—agreed that further legal research will have to be done before more decisions are made, and ultimately did not take any action.

ACC Attorney Bill Berryman said his office is going to spend the next two weeks researching existing state and local laws that may be applicable. County lawyers will also look into any limitations on whether Bird scooters are allowed on roads with speed limits over 35 miles per hour, Berryman said.

In addition, ACC police and the public information office are collaborating to develop an educational campaign that will disseminate information such as laws and regulations to the public.