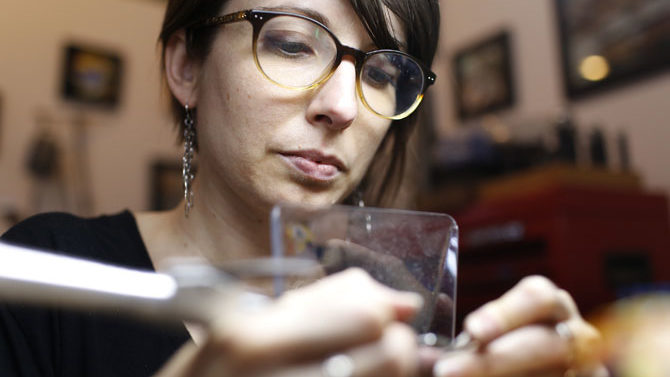 Athens artist Beth Cyr, owner of Beth Cyr Jewelry in the Chase Park Warehouses, hit her goal of making $100,000 in sales during her 10th year as a full-time artist in 2016. This year, she’s moving near Seattle to be closer to the lifestyle—and buyers—that will help her continue to grow.

Cyr, like many other artists in the Athens area, has found a supportive art culture in town, but not necessarily the collectors or supportive financial culture to back it.

“In general, Athenians are very supportive of the arts, but the number of people who have enough money to spend on my items frequently enough to support me does not exist,” Cyr says. “Without online sales, from the West Coast in particular, there’s no way I could scrounge up enough sales locally to pay the bills.”

While earning a metalsmithing degree at the University of Georgia, Cyr worked a service industry job in Athens to build relationships and sold at holiday markets before she decided to go full-time as an artist. In December 2005, she sold a painting for $600 on the day she turned in her notice at her job. She decided to make full-time art work.

Cyr opened an Etsy store to sell her jewelry, which quickly became her platform for the first six months. She set several financial goals, including $100,000 in sales by her 10th year. During the first year, she hit $12,000. During her second, she doubled it to $25,000. During her third, sales jumped to $90,000. She paid off debt during her fourth year and began to save money. By 2009, she realized a niche group liked her wedding rings, and she opened an Etsy shop focused on wedding rings. That’s when she hit her stride.

In the past few years, Cyr has shifted social-media focus several times as Flickr, Twitter and Pinterest gained followings in the jewelry world. As each platform became saturated with sellers, she focused on a brand that appealed to couples who appreciate nature and organic jewelry with recycled metals.

“The trend has shifted to becoming an authority and pushing your own brand online,” she says. “It’s interesting to look over the past 10 years and see what sites are big and what’s completely unfriendly to the arts now.” 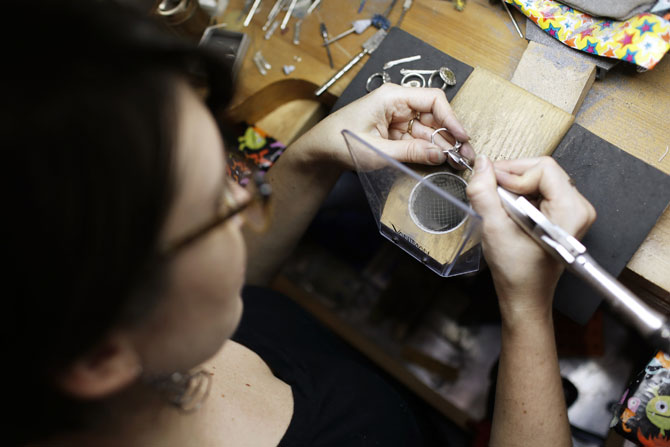 In 2016, she focused on Instagram, but became discouraged as sponsored posts took over her feed. She then researched the algorithm behind Facebook ads and found the targeted marketing to be extremely helpful. It’s an ongoing learning process each year, she says, and the online communities she’s found along the way have helped. In fact, she still keeps in touch with the Etsy Metals group she helped form in 2006.

“If I didn’t have other people going through similar things in the business, it would be a lot more discouraging,” she says. “We’ve been successful at the same time, and then there are years when everyone feels like it’s the worst year, so I know it’s the economy and not just me failing at marketing.”

Cyr, who is engaged to Athens potter Alex Kroh, is looking forward to starting a new adventure during her next decade of business in a new place. At the same time, she’s sad to leave the patrons who have supported her locally. Her 2016 holiday sales were some of the best yet, and she realized she won’t be around for the holiday season this year.

“Local sales are not a huge portion of my income, but the overall community support is wonderful,” she says. “Even if 200 people have only ever bought a pair of earrings, it’s great to have that support and see them in person. Now I have to find that support in a new community when I move.”

This month, Athenians can support local artists by visiting one of the largest, most diverse annual art events in town. The Lyndon House juried exhibition invites an out-of-town curator to put together a comprehensive show of local work. More than 300 artists entered nearly 800 works of art in late January, and now 162 pieces of sculpture, photography, drawing, painting and metalwork will open to the public at the end of March.

“I’ve seen the show motivate the community to produce and submit work,” says Didi Dunphy, the Lyndon House program supervisor. “Artists pull in their professional muster, think about artistic excellence and up their game.”

Over the years, Dunphy has worked with art-focused groups in Athens to teach business savvy. The Athens Area Art Council, for example, hosts monthly “Brunch and Learn” sessions at the Lyndon House to talk about intellectual property rights, website building and podcasting.

“I fully believe that artists must be able to cross so many boundaries, often for things they didn’t study in school,” she says. “They should know, for example, all of the aspects that go into launching a show, even basic plumbing and electrical.”

Dunphy, who has lived in Athens for about a decade, has seen support of the arts shift favorably. Although it’s improving, it’s still tough to base a full-time income on local customers, she says.

“Only a handful of artists in the U.S. can say they live 100 percent on studio work,” she adds. “That has always been the history of art in America, and continues to be. You have to use your inventiveness to offset that studio time with other work.”

Many artists in town do that through service industry jobs or by teaching their art. In fact, classes have become a major source of income for KA Artist Shop on Jackson Street in the last two years. As a business owner who sells art supplies to artists, Kristen Ashley is now focusing on boosting that sense of community.

“I’ve noticed that other artists are the most supportive of each other,” she says. “During our gallery shows, multiple artists install their pieces and work side-by-side at the same time. You can’t get better than that.”

But those artists could use some additional support, she says. More local businesses could buy art for their walls and lobbies. More intown marketers or business school students could find a niche as art representatives or agents to promote artists in larger markets in New York, California and international art capitals.

“Athens could use more people in the support role,” she says. “At the same time, we as artists need to get our acts together and step it up. Athens isn’t lazy, but we need to rise above that attitude and help collectors find our work.”

In his third year as a full-time artist in Athens, Will Eskridge has found that consistent sales are linked to branding and curating his work. He doesn’t let his brand stifle his inspiration in his at-home studio, but he’s figured out who his dedicated collectors are and what they like. During the past two years in particular, he’s focused on talking to supporters on social media and showing them his process.

“Social media is an art in itself,” he says. “Branding, along with pricing, is one of the toughest parts of being an artist. It has a bad connotation in the art world, but it’s often necessary.”

Eskridge has become lovingly known for what he calls “impressionistic surrealism,” which combines wild animals, geometric shapes and vivid, saturated colors. His dad is a veterinarian and his mom is an artist, and paired with 20 years working as a full-time graphic designer, the brand gradually emerged.

“Now, I sit down and think through the brand-related aspects that make buying art special for collectors, such as packaging and shipping,” he says. “They spend hard-earned money on my art as a luxury item, and I want to show them I’m appreciative of that.” 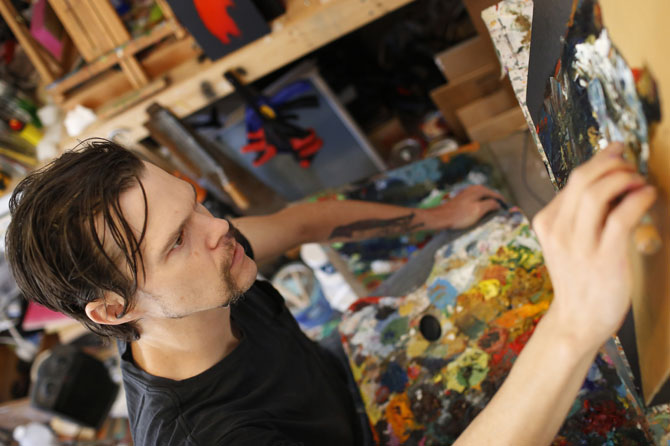 As brands become more important for all industries, Athens curator Tatiana Veneruso believes it’s important to build a support system around artists. She created TV Gallery, a virtual art platform, in 2016 to promote contemporary artists in the Southeast. She posts pieces for free to boost artists’ names in a collaborative way.

“Even still, it’s a struggle to get eyes on it because social media has become so saturated,” she says. “There’s a high concentration of talented people in this town, and we need to give them ways to be seen.”

“Branding doesn’t take much money, but it does take thought and time,” she says. “The little details—a logo, a website, a consistent typeface—make you look professional.”

It also takes a community that appreciates art. When he first moved to Athens in 2007, Brian Hitselberger knew he wanted to focus on art in an inexpensive community with a high quality of living. He decided to take a job that paid the bills so he could save time and energy for the studio. During the last decade, he’s found a community of support while working in various roles at the Georgia Museum of Art, Piedmont College and the University of North Georgia.

“At this point in my life, it’s important that the work is seen, not necessarily that it is sold, although it feels great when that happens,” he says. “For the most part, I’ve made my income based on skills I’ve learned in making my work, not necessarily selling it.”

Hitselberger, now an assistant professor at Piedmont College, has begun collecting local art himself and sees that as the avenue forward for artists to nab a viable paycheck. He seeks out work by artists he likes and sometimes sets up payment plans or barter arrangements with them.

“Supporting artists means giving money to artists, period,” he says. “The best way to do that is to buy their work, however you can make it work. I think it’s as simple as that.”