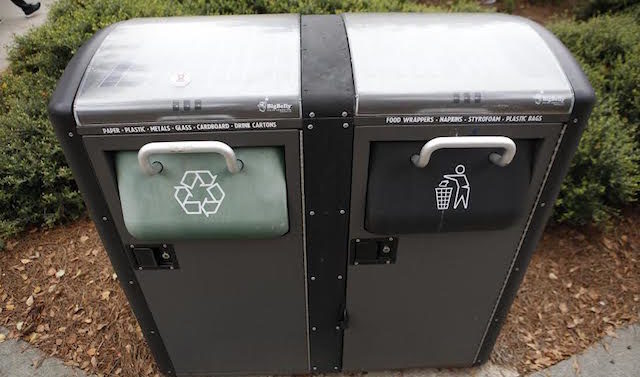 The University of Georgia has continued its effort to make it easier to recycle on campus by adding 40 additional solar-powered receptacles. The program is another effort by the Office of Sustainability to improve environmental responsibility on campus, after previously installing solar-powered charging picnic tables and adding electric car charging stations in campus parking decks.

The Facilities Management Division, which includes the Office of Sustainability, installed 30 of the new receptacles in 2013, but had to wait until last month to add the additional bins because of cost restraints.

With the most recent installation at various locations on North Campus and at busy transit stops, the bins are now accessible across the entire campus, says Kevin Kirsche, director of the Office of Sustainability.

“The expansion of the Bigbelly solar trash and recycling bins contributes to a much cleaner campus,” Kirsche says. “It is an investment in renewable energy technology, and it goes to helping us continue a culture of sustainability on campus.”

UGA rents the stations, which include one trash container and one recycling container, from the company Bigbelly at $140 per month for each station, costing UGA around $10,000 each month, Kirsche says. But he also emphasized the money saved by the program through reducing the labor needed to empty the bins and the positive effects of increased recycling rates. Kirsche estimated that the program saves $60,000 per year in labor costs and $23,000 per year in fuel for cars by having to collect trash less often.

Before the first solar stations were installed, the department did a waste audit of the trash bins on campus and found that 90 percent of trash could be recycled. “Before we installed the bins, there was no place to recycle outside of buildings, and that was a problem, because most of what people were throwing away was recyclables,” says Andrew Lentini, the program coordinator at the Office of Sustainability.

After the first wave of bins were put in, recycling rates increased by 40 percent, bringing UGA closer to the goal of recycling 65 percent of its waste by 2020. Currently, about 50 percent of the university’s waste is recycled, and Kirsche says he hopes the expansion of the program will increase the recycling rates. The trash diverted from landfills is expected to save the university $1,000 per year.

Employees now only spend 10 percent of their day emptying trash bins when that used to be their only task, and are now free to fulfill other duties. “One of the ladies who was emptying trash bins is now driving a truck that picks up food waste from the dining halls so that we can compost all of it,” Lentini says. “There would not have been labor to do that if that person was stuck emptying trash cans that didn’t necessarily need to be emptied.”

UGA dining halls removed single-use plastic cups, plates and utensils from the waste stream in 2014, and now composts about 10,000 pounds of organic waste from dining halls per week at the Bioconversion Center on South Campus. In addition, interns collect coffee grounds, produce and paper towels for use at the UGArden.