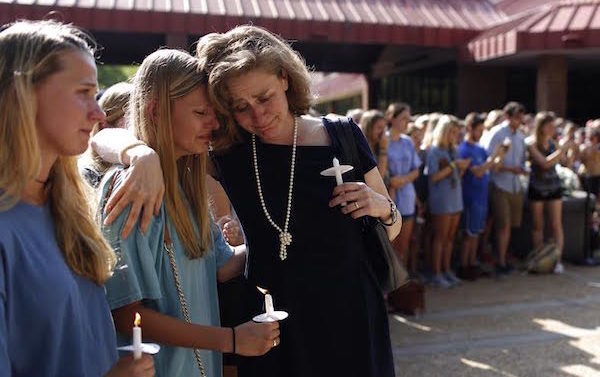 The students—Kayla Canedo, 19, and Brittany Feldman, 20, of Alpharetta; Halle Scott, 19, of Dunwoody; and Christina Semeria, 19, of Milton—were killed after the Toyota Camry driven by fellow student Agnes Kim crossed the center line on Highway 15 and collided with another car, according to Georgia State Patrol. Kim, 21, of Snellville, is still hospitalized and in critical condition.

UGA President Jere Morehead began the service, saying it is the worst loss UGA has suffered in his 31 years at the university.

“We are all grieving and in pain, shocked by the tragic loss of four of our students and the critical injuries one other has sustained,” he said.

Counseling was available at the service, which Vice President of Student Affairs Victor Wilson encouraged students to utilize during and after the service.

“We all need to lean on each other in this difficult time,” Wilson said.

The entire plaza was filled with grieving students by the time the service began, along with students lining the perimeter wherever a space was available. Houston Gaines, the Student Government Association president, said the size of the crowd speaks to the “power of community” at UGA.

The four women who died were members of three sororities and several of their chapter’s members spoke to their good character and friendship at the service.

“Our mourning is becoming a celebration of their lives,” one of Scott’s fellow Tri Delta members said.

“Last night, my world was shattered,” said Courtney White, the president of UGA’s Alpha Chi Omega chapter, of which both Canedo and Semeria were members.

The brothers of Semeria and Scott, Nick Semeria and Will Scott, tearfully spoke about their losses during the service, with Will Scott saying he drove back to Athens from home after hearing how many people were planning to attend the memorial in honor of his sister.

“This really hurts, but you all are making it a whole lot better,” Nick Semeria said. 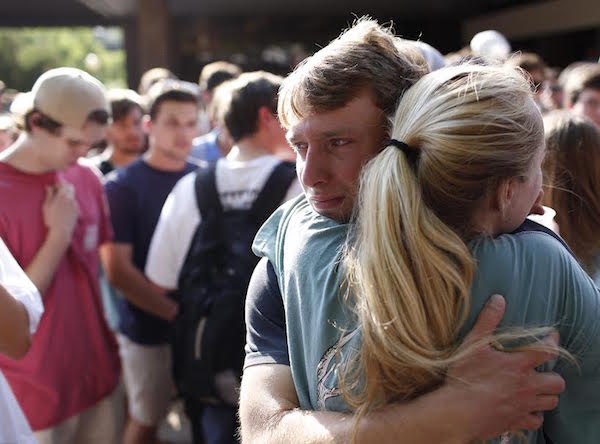 Will Scott, brother of Halle Scott, receives a hug at a UGA memorial service earlier this evening.

In addition, Georgia Gov. Nathan Deal has ordered all flags flown on state buildings and grounds be lowered to half-staff until Friday evening to honor the lives of the students.

An earlier version of this article misidentified Will Scott.

Here Are the Five Bulldogs Drafted by the NFL