UGA Is Up in Arms Over the Campus Carry Bill 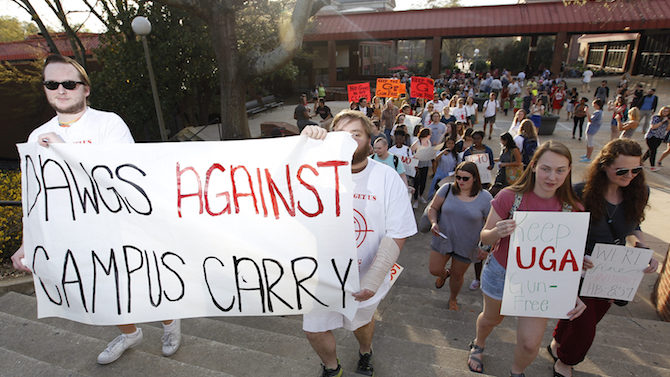 The University of Georgia community is rallying in opposition to the “campus carry” gun bill that received final passage in the Georgia General Assembly on Mar. 11 and is awaiting Gov. Nathan Deal’s signature.

Administrators, faculty and students have voiced concerns hoping that they will be able to persuade Deal not to sign the bill. Opponents of the bill say they are concerned about safety, the emotional stability of students, professors leaving and threats to a curriculum that includes controversial topics. UGA students have organized marches, mobilized opposition on social media and written letters to the governor opposing House Bill 859.

About 100 UGA students and employees marched from the Tate Student Center to the Arch Mar. 15 to oppose campus carry. Stuart Swinea, a UGA senior, said he helped put together the march to protect his younger peers from attending classes on what he feels would be an unsafe campus were the bill to be enacted.

“Several of my younger peers have said they are very concerned for their safety on campus next year, and a couple of them have hinted at transferring,” he said.

Students at the march were joined by several faculty members, including Montgomery Wolf, a senior lecturer in the history department, who said she is dismayed that the legislature has not heeded the concerns of university faculty and administrators.

“I think it is really reprehensible that our legislature is not listening to the voices of leaders on campuses,” Wolf said.

Opposition has also taken the form of an online change.org petition created by UGA student Paul Oshinski that has more than 7,500 signatures. Referencing an AJC poll conducted two years ago that found 78 percent of Georgia voters do not agree with guns on campus, Oshinski said he thinks the legislature’s persistence to pass this measure is inappropriate.

“I feel like it is an overstepping of the Georgia legislature to pass a bill that is opposed by the majority of the people the bill will affect,” he said.

Lainey Saunders, a UGA senior, wrote an open letter to Deal voicing her opposition to campus carry and posted it on social media. Saunders said that ever since she first visited campus she has felt safe, but allowing guns will end that.

“Since I’ve been here, it has been an incredible place where people debate and they challenge each other. I’m scared that having guns on campus is going to completely dispel that culture,” she said.

Saunders also referenced a controversial presentation given at the University of Houston during a faculty meeting addressing concerns after a similar campus carry bill was passed. The presentation recommended that professors “drop certain topics from [their] curriculum” and “be careful discussing sensitive topics,” among other suggestions.

Students do have concerns about safety, and Saunders acknowledged them.

“I understand that Athens can be dangerous; incidents do happen, but I don’t think that arming students is the way to change that,” she said.

Deal issued a statement Mar. 14 implying he will veto the bill if substantial changes are not made, including addressing day care centers on campuses and dually enrolled K-12 students who attend college classes. The statement also said that “governing boards of universities and technical colleges should have the discretion to set reasonable rules regarding disciplinary hearings and faculty and administrative offices.”

Oshinski said that Deal’s statement recommending changes to the bill is a “step in the right direction,” but he still hopes to see it vetoed.

Jennifer Rice, an associate professor in the geography department and a member of Franklin Faculty Senate, said Deal’s statement shows the bill has major problems and should be vetoed, although she appreciates the fact that he has identified aspects that need to be revised.

A social work professor, Larry Nackerud, said he sees Deal’s statement as a sign it is more likely to be signed.

“I think the legislature will do what they have to do to tweak the bill and put it in congruence with what Gov. Deal wants, and then he will sign it,” Nackerud said. At press time, the legislature hadn’t passed another bill addressing Deal’s concerns, and the deadline to do so is Thursday, Mar. 24.

“If we had known it would not be passed by now, we would have made a statement,” Frick said.

Barbara Biesecker, a University Council member, introduced a motion during a meeting Wednesday supporting the administration’s opposition to the bill. The motion was approved unanimously.

The Student Government Association also stood by President Morehead’s statement and Huckaby’s testimony. In a letter signed by SGA President Johnelle Simpson, the organization expressed concerns for students’ safety, saying “we believe that this bill contradicts our efforts to make campus as safe as possible for students.”

The Franklin Faculty Senate also unanimously approved a letter to Deal opposing the bill on Wednesday.

Rice also emphasized that she and other members of the body fully understand the stipulations of the bill, including requiring background checks and only allowing people 21 and older to carry. Under the bill, guns would continue to be banned in dormitories and fraternity and sorority houses, as well as at athletic events. However, faculty remain concerned about the possibility of an accident or a mistake during a crisis situation.

Kristin Kundert, an associate professor and the undergraduate coordinator for the drama department, said she is concerned about the mental health of her students.

“As undergraduate coordinator, I have a student in my office at least once a month that is dealing with some sort of serious depression. If we suddenly have guns on campus, what’s going to happen?”

Kundert also fears curriculum changes will have to be made and she will no longer be able to have meaningful discussions and debates in the classroom.

“You can’t freely get into serious issues when there is a threat in the classroom and a gun is a threat,” she said.

The changes Deal suggested will not be enough, Kundert said—the only option is to veto the bill, she said.

“I can’t have a gun in my classroom. I won’t. You can’t educate with a gun in your classroom,” she said.

She also believes UGA will lose faculty if Deal signs the bill, referencing the recent departure of a University of Texas dean after a similar bill was passed in Texas. Kundert said she will be among those looking for a position elsewhere.

Another professor in the drama department, John Patrick Bray, is also concerned about the mental health of his students and the potential effects of allowing guns on campus. People not in the university system, such as legislators, do not understand the pressure college students now face to perform, he said.

Bray also believes the legislature is not representing the interests of the university faculty and students.

“There’s kind of this feeling from the government of ‘you teach and let us do our jobs,” he said. “Well, we elected you and if you are not representing our interests, then whose interests are you representing?”

Listen and Be Heard

The School of Social Work will host a discussion on from 12:15–1:15 p.m. Monday, Mar. 21 in the social work building’s ground-floor student lounge to educate people about the bill and provide a forum for opposition and support. Larry Nackerud, the professor hosting the discussion, said that people supporting the bill are welcome to voice their opinion.

“People with an opinion different from ours’ are more than welcome to come to the discussion and they will certainly be afforded the opportunity to speak. We will set the parameters so that everyone’s view is respected,” he said.

Lauren Ricciardelli, a Ph.D candidate in social work who helped organize a discussion on the campus-carry issue, said she has not heard much support for the bill in her classes.

“The vast majority thought this is absurd,” she said. “I didn’t find anybody that was in favor of the bill becoming law, but there was a voiced opinion that it does not change anything because people who are concealed carrying illegally now will just continue to do so and for those who don’t wish to carry, this will not lead them to do so.”

From a social work perspective, Nackerud and Ricciardelli are concerned about the connection between mental health and gun violence, as well as students potentially feeling a responsibility to stop violence.

“There’s kind of this implicit mandate that students are responsible for doing police work,” Ricciardelli said. “A student with a gun could see a threat as being a threat and extinguish that threat. I think that is an unfair mandate to put on our students.”

Even though the law stipulates a conceal carry permit which requires a background check, UGA student Olivia Haas still believes Georgia’s gun laws are too lax to properly protect students.

“In light of Georgia’s lax gun laws and that they have pretty low standards for how Georgians can obtain concealed carry licenses, having students that don’t necessarily know how to use them appropriately could be really dangerous,” she said.

Haas is also concerned about the prevalence of sexual assault on college campuses and the potential dangerous situations victims could be put in by allowing students to have guns on campus.

“On campuses, there are instances of women who are assaulted by other students and now they will have to face their assailants who now could have weapons,” Haas said.

Though most of the UGA community seems to object to the bill, not everyone does.

Robert Eagar, the Southeast regional director for Students for Concealed Carry, said the group is “extremely excited to hear the bill passed because it gives students the right to defend themselves.”

Addressing common safety concerns and claims that guns make campuses more unsafe, Eagar said, “We haven’t seen those predictions come true in other states. We understand it makes people nervous, but they are unfounded claims.”

Shane Matthews, a senior at UGA, said in an email that he supports the bill because it allows people who park on campus after hours and walk downtown to legally bring a handgun.

Matthews also made the argument that runners whose paths cross through campus would now be allowed to carry a handgun. He believes guns on campus will not have an effect on the learning environment.

“I am confident that the presence of a concealed handgun on a law abiding student will not distract from learning in any manner,” he said.

SXSW in Photos: Peaches, MSTRKRFT, The Blind Shake, and More

SXSW in Photos: Mike Watt and the Secondmen, John Doe, Lust for Youth and More