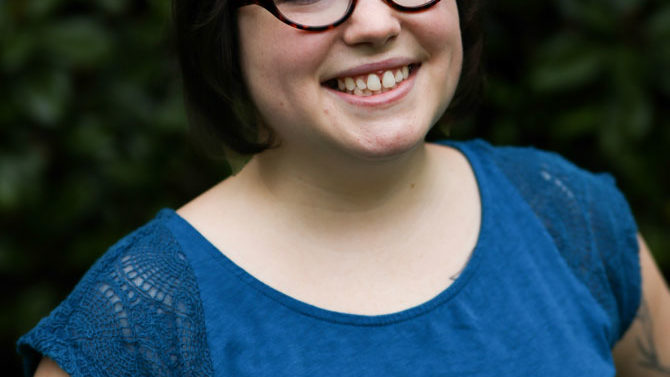 Asa Greene-Kresl bowled in a gold tutu. She was one of several people in glitzy attire at Atlanta’s Midtown Bowl, and one of thousands across the country bowling for a cause on Apr. 19. At 2 years old, she also may have been the youngest participant in the sixth annual National Abortion Access Bowl-A-Thon.

“She’s wearing gold in solidarity,” April Greene explains. April is Asa’s mother and the founder of the Georgia Reproductive Justice Access Network (GRJAN). What April describes as the Bowl-A-Thons’ “unoffical push towards a glittery aesthetic” is a somewhat irreverent effort to change the connotation of abortion funding.

“Reproductive justice advocacy is difficult, physically and psychologically,” she says. “We look forward to blowing off some steam. It’s a fun way to support this very trying work.”

April and her colleagues Betty Barnard and Kelly Wegel founded GRJAN (pronounced like a Southerner saying “Georgian”: jor-JAN) in 2011 to meet the shockingly underserved needs of those in the Southeast: 90 abortion providers for a population of 17,678,332 self-identified women, or one for every 200,000.

What Do People Do?

“I don’t typically share my story with clients,” Greene tells me. “I mean, I’ll tell them I had an abortion, but I don’t go into detail.”

On a Tuesday summer night, she sits on her front porch after putting Asa to bed. I ask her to share her story, and she tells me. Some familiar phrases stand out, if you are in the habit of listening to abortion stories: “first in the family to attend college,” “broken condom,” “scared.”

Greene and three other family members were living on a shared income of $12,000 a year at the time. “I knew, obviously, I couldn’t afford a baby. I had financial aid from my college, which I parcelled out throughout the year to help my family.”

Uncomfortable telling anyone but her partner, she “didn’t really have a way of researching providers. I was at a small community college at the time, and I worked on campus. I remember kind of pulling myself in the office I worked in and locking the door.” On an office computer, she picked her clinic for its name: The Feminist Women’s Health Center in Atlanta.

She calls herself “one of the lucky ones.” Though there is no public funding for abortion in Georgia, those eligible for Medicaid qualify for a discount, as do students. Still, she says it would not have been possible without her partner, who drove her to Atlanta and helped shoulder some of the cost. “It taught me how geography and money play a role,” she says. “It made me ask the question: ‘What do people [without those resources] do?’”

April eventually transferred to the University of Georgia, where she graduated with honors in women’s studies. The service that allowed her to pursue higher education later became the beneficiary of her education. She applies the same resourcefulness that led her to the FWHC to support the clinic and its patients now.

“I couldn’t imagine a better way to spend my degree,” she says. “Coming to UGA was huge for me. The huge gorgeous buildings… students shuffling past and me stopped in my tracks, looking. I couldn’t imagine squandering that opportunity.”

On June 6, Kenlissia Jones, who was five-and-a-half months pregnant, took four Cytotec pills she had ordered online from Canada to induce an abortion.

“The family is poor, so there’s not a lot of funds and everything,” her brother told The Washington Post. “She felt like she didn’t have any money to get an abortion the legal way, and so as a result of not having money and being in a position of no resources, she ended up doing it the illegal way to not bring another child in the world… to not burden anyone else or burden herself.”

Cramping painfully in the backseat of a neighbor’s car, Jones delivered a fetus en route to the hospital. The fetus lived for 30 minutes. Jones was initially charged with murder and jailed without bail.

“Yes, absolutely,” she says. “She was driven to make an extremely difficult choice that would not have been necessary in a different legal climate. [Jones] wanted an abortion, and she couldn’t afford it, and she didn’t have access to a clinic near her.”

A week after Jones’ arrest, The American Journal of Public Health released a harrowing report on Georgia’s controversial ban on abortions after 20 weeks of pregnancy. The report “tells us what we already know,” wrote GRJAN board member Jessica Seales on the organization’s Facebook, “20-week bans disproportionately affect poor people, people of color, and forces people to travel longer distances and face larger barriers to be able to access abortion care.”

The ban—part of which is currently unenforced while it makes its way through the court system—was spearheaded by former state Rep. Doug McKillip (R-Athens) and signed by Gov. Nathan Deal in 2012. It grants no exceptions for cases of rape or incest. Even if the 20-week ban is eventually permanently struck down, abortions after 24 weeks are no longer available anywhere in the Southeast, Midwest or in parts of the Northeast.

Reproductive justice advocates breathed a sigh of relief last month when the Supreme Court temporarily halted a law that would have closed more than half of Texas’ abortion clinics so that a lower court can review it. Even if that law is permanently struck down, 19 clinics in a huge state with a large undocumented-immigrant population is hardly sufficient.

These “when” and “where” threats to reproductive care are exacerbated by the “how.” Though the Hyde Amendment bars federal funding for abortion, 17 state governments provide funding. None of these, of course, are anywhere near Kenlissia Jones.

Jones’ murder charge has since been dropped, as the Dougherty County district attorney determined that the law does not provide legal standing to prosecute. She now faces a misdemeanor charge of illegally possessing Cytotec. The case could breathe new life into the “personhood” movement, an effort to outlaw abortion by declaring that embryos and fetuses have the rights of people, the Atlanta Journal-Constitution reported.

Greene—optimistically—says that hostility to abortion-access is why her fellow Southern allies are some of the most innovative.

“Some advocates in states [with funding pools] look at the Southeast and say ‘Gosh, that’s so backwards.’ Which is true, but they ignore the work of some of the fiercest advocates who are here. The question becomes ‘Why are you bothering?’ Which is so discouraging and undermining. You have to be really creative to make it happen here.”

So what do people in this situation do? Athens has no abortion clinic, so sometimes they call GRJAN, which provides grants to those in need in the Southeast. “We have always functioned as a practical support resource, providing housing and transportation, gas cards and whatever we can,” Greene says. Their confidential hotline can be reached at 706-623-7526.

Central in combating abortion stigma is clarifying who seeks abortion. “We look at reproductive justice as being inclusive of men, women and gender nonconforming folks. Not everyone who could possibly become pregnant identifies as a woman…

“From the start, I envisioned an organization that was guided and led by the people who are most impacted by the work that we are doing. For me, [that] means remembering I’m white. My experiences don’t define this work. One of the challenges is trying to decenter myself from what we do and create space for those who rely on us the most. That tends to be young women of color. We create space for them to be leaders in this movement and this work.”

Since abortion restrictions most directly harm those below the poverty line and people of color, grassroots networks that navigate the ever-shifting legal parameters encroaching upon human rights are akin to a modern-day Underground Railroad.

“It’s easy to despair,” says GRJAN board member Jessica Seales. “The people in power are not there to protect us. The legislature won’t; the courts won’t, but I’m hopeful. Hopeful, because I know a network of over 4,000 people nationwide who are committed to access. We’ll fund each other. We’ll drive each other. We’ll take each other across state lines and picket lines and we’ll lift each other up. We’ll take care of each other. No matter what.”

In addition to the Georgia Reproductive Justice Network, the following organizations offer abortion services in Georgia: