Courts and Couples Prepare for the Same-Sex Marriage Ruling 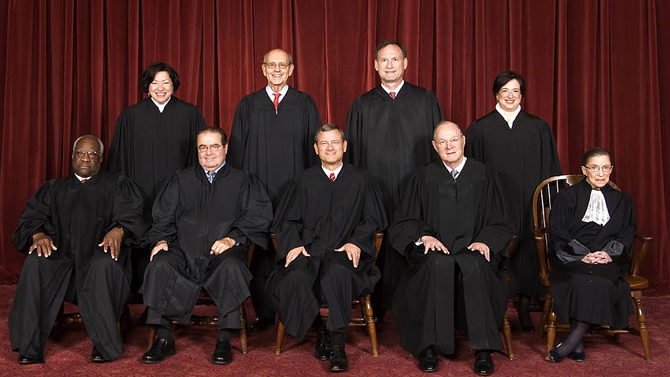 Speculation about the U.S. Supreme Court’s decision regarding same-sex marriage has already led to preparation. The Georgia Council of Probate Judges is ready to send out new marriage forms to all 159 counties. Wedding planners and vendors are creating same-sex wedding events and packages for July. Conservative lawmakers are already calling the case a current-day Roe v. Wade decision. Now the Supreme Court just needs to issue a ruling.

Set to be released between now and the end of the court’s 2015 term on June 30, the decision of Obergefell v. Hodges— which combines six cases from Ohio, Michigan, Tennessee and Kentucky—will set off a chain of reactions beyond the simple question of who can marry. The decision could set the stage for new thoughts about gender and sexual-orientation discrimination, the relationship between culture and law and the roles of church and state.

“I believe in 20 years, we’ll look back on this battle and view it as inevitable that it played out in the way it has,” says University of Georgia law professor Hillel Levin, who specializes in constitutional law and has taught a seminar about same-sex marriage cases several times in the past few years.

“When the opinion comes out, in all likelihood in favor, we will mine it for precedent for other cases and lose sight of what it took to get us here,” Levin says.

“Assuming the Supreme Court rules in support, we’ll see religious freedom legislation again and some folks who will call for people to ignore the ruling,” Levin says.

In Georgia, expect that talk to die quickly. Gov. Nathan Deal and Attorney General Sam Olens (both Republicans) have already agreed to support the ruling, whatever it may be. Likewise, Georgia’s probate judges are prepared to substitute current marriage license applications that say “bride” and “groom” with new forms that say “applicant 1” and “applicant 2.” On the day of the ruling, new digital forms will go online immediately.

“I don’t know of any individual judges who have decided to take a different tact other than doing their jobs,” says Athens-Clarke County Probate Court Judge Susan Tate, who serves on the executive committee for the Georgia Council of Probate Judges. “We’ve encouraged everyone to uphold their duties.”

The Supreme Court’s likely decision in favor of same-sex marriage stems back to 2013, with Proposition 8 in California and the federal Defense of Marriage Act, says UGA law professor Sonja West, who specializes in constitutional law and the current term of the Supreme Court. In the DOMA case, in particular, Justice Anthony Kennedy wrote about federalism, dignity and liberty, which are key words lawyers associate with protection under the law, she says.

“It’s funny that Scalia’s complaint may have been predictive of what the appeals courts actually did this year,” West says.

Plus, the Supreme Court declined to hear other same-sex marriage cases last fall, which allowed many marriages to move forward in the states that allow them. “It would be unusual for them to do that and then turn around now and say those couples didn’t have the right to get married,” West says. Experts are also pointing to specific signs during the court’s oral arguments in April that justices are leaning in favor of same-sex marriage. When Justice Kennedy first asked questions, he seemed skeptical of certain rights, but he later asked questions that seemed favorable, says West, who attended the arguments.

“It was fascinating both inside and outside of the courtroom,” she says. “At one point, someone stood up in the middle of the argument and screamed about the Bible, which is not typical.”

Compared to other rights issues debated by the Supreme Court in the past, this argument has moved quickly. Although the decision will lead toward more battles and legal questions, it represents a “bending of the historical arc toward justice more quickly than in the past,” Levin says. More than 57 percent of Americans support same-sex marriage, according to Pew Research polls, and the 37 states that allow it contain 70 percent of the U.S. population. “It’s something that even people with a conservative world view can either outright agree on or reconcile themselves toward in a way they can’t with other issues of sexual politics,” Levin says.

Preparing for the Future

Though the ruling may call for states to allow same-sex marriages, it won’t dictate who must perform the marriages—and it certainly won’t force churches to hold them. “That came up at the oral argument, and it’s quite clear the answer is ’no,’ just like we allow Catholic priests not to perform certain marriages,” West says. “Churches can make choices.” Several Georgia counties are developing a list of venues that will hold ceremonies, but judges in Athens haven’t yet discussed who will perform them, Tate says.

In addition, state-funded programs will be required to accept same-sex marriages as law, so expect the topic of partner benefits to pop up again. The University of Georgia public affairs office declined to speculate before the Supreme Court decision is released. However, West believes an automatic change would be necessary.

“If all marriages are recognized and there is no distinction, state universities would be bound to follow the law,” she says. “This could have a big impact.” In fact, the change could benefit UGA, Levin adds. “By saying partnership benefits couldn’t be extended, we may have lost out on talented faculty and staff members,” he says. “It will be good for the university in the long run.”

As questions about workplace benefits, adoption and housing develop, look for plenty of celebration and ceremony as well. Betting on a favorable decision, Atlanta wedding planner Pamela Wynn created the Ultimate Same Sex Wedding Experience Expo for July 26 in Piedmont Park, which will pull in 40 vendors—gay-friendly venues, photographers, bakers and wedding planners who want to meet new clients. Wynn came up with the idea a few years ago, but waited until now to put the event together.

“It’s time for planners and the whole event industry to come on board and be open to change,” she says. “For your business to exist and grow, you have to open the doors.”

For Wynn, the expo is also personal. Her son will marry his partner in Hawaii in August and then hold a celebration in Georgia. In his honor, Wynn is setting up other resources to help same-sex couples, such as a crowdfunding project for couples to afford weddings, a resource center for health information and financial counseling and an association of event professionals who want to hold wedding expos around the state.

“The same things heterosexual couples are privileged with, same-sex couples should have as well,” she says. “Their money is green just like ours. Their blood runs red, just like ours.”