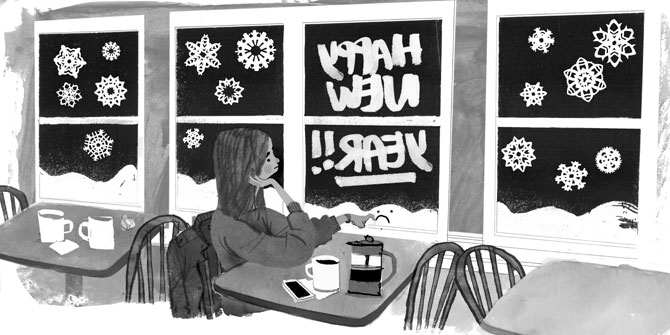 The days are shorter, the sun sets earlier, and it’s common to get through a day without going outside or seeing much sunlight. When the temperature is chilly, it’s too tempting to snuggle under blankets and sit in front of a screen rather than throw on sneakers and walk around the block. Hibernating for too many days in a row, however, can lead to fatigue, inability to concentrate, cravings for sugar and carbs, poor sleep and sadness.

When the lethargy and anxiety kick in, it’s tough at first to differentiate it from other depressive disorders, but you may notice a pattern that syncs with the seasonal cycles, peaking from December to February. In recent years, psychologists have seen more cases of seasonal affective disorder in patients who feel down when the cold months come.

“People are becoming more aware of how the changes in the seasons impact them,” says Marie Williams, a Bogart psychologist and president of the Athens Area Psychological Association. “The changes in light affect our circadian rhythm and melatonin being produced.”

Seasonal affective disorder affects about 5 percent—or more than 10 million—Americans, with a half million diagnosed each year, according to the American Psychological Association. The disorder is more common in women than in men and typically begins after age 20, with about 6 percent experiencing symptoms severe enough to affect quality of life and require hospitalization. About 5 percent of the University of Georgia student body experiences SAD, according to National College Health Assessment data collected by the University Health Center each year.

“I haven’t seen high numbers in my patient group, but I imagine that if I were practicing farther from the equator, I’d see more,” Williams says. “SAD really differs in severity from the milder form of what we call ‘winter blues.’”

Researchers recommend three easy solutions to keep your body on track and in sync with the sunlight: Maintain vitamin D levels, go outside each day and consider light-therapy options.

“Vitamin D could have a regulative role in the development of SAD,” says Alan Stewart, a UGA counseling and human development services professor who researches the psychology of weather and climate.

Stewart teamed with researchers at the University of Pittsburgh and Queensland University of Technology in Australia to study how vitamin D is linked to seasonal depression and a lack of sunlight. The team reviewed more than 100 scholarly articles and reported their findings in the November issue of health journal Medical Hypotheses.

“Studies show there is a lag of about eight weeks between the peak intensity of ultraviolet radiation and the onset of SAD,” he says. “This correlates with the time it takes for UV radiation to be processed by the body into vitamin D.”

Vitamin D is also involved in the creation of serotonin and dopamine in the brain, which are two chemicals linked to depression. One way to stock up on vitamin D levels naturally is to get outside each day, even if it’s cloudy outside. Take a brisk walk and aim for 30 minutes, but don’t worry about the time, Williams says. “If I tell a patient to go outside and walk for 45 minutes, she’s focused on that 45 minutes,” she says. “Instead, bundle up, grab a coffee, and walk through the Botanical Garden. Time will take care of itself.”

Other suggestions? Take your dog for a walk. Stroll around the block in your neighborhood. It’s tough to do either and come home within five minutes.

“When you experience depression, vegetative symptoms feed themselves and make it worse,” Williams says. “The last thing you may feel like doing is getting up and going out, but that’s exactly what you need to do.”

If you’re thinking about adding light therapy, talk to a professional and make sure you’re using the right source. Tanning beds deliver the correct amount of light, sure, but they add UV rays and aren’t as effective as phototherapy devices designed to deliver 10,000 lux (compared to indoor lighting at about 100 lux and a bright sunny day at about 50,000 lux). “Sometimes people don’t understand what phototherapy is and sit in front of a regular lamp or think that they need to sit and look into a light,” Williams says. “But if patients use the correct device in the right way, we typically see a response quickly.”

Different light therapy options—light boxes, dawn simulators and light visors—are most effective when used in the morning for about half an hour, placed two or three feet from you. Combine it with your morning routine of getting dressed, eating breakfast or watching TV, and you won’t notice it’s there. The light therapy resets your sleep cycle and keeps you in sync with the sun.

Although it’s relatively rare, psychologists also see cases of summer SAD, which swings cycles in the other direction during warmer months, causing weight loss, agitation and loss of sleep. “We don’t hear about it as much, but it does cause problems,” Williams says. “Either way, your body’s rhythms are off, due to shortened or lengthened melatonin cycles.”

In cases with severe symptoms, Williams suggests doses of melatonin to bump your cycle back on track or anti-depression medication to address damaging SAD effects. If your symptoms seem severe enough to consider phototherapy or medication, don’t be afraid to seek help from someone who can help you monitor the progress. “Don’t feel like you have to do this on your own,” she says. “Depressive symptoms can impact your life in a negative way, which can prevent you from doing the basic daily things you need to do.”