Patience and Pills Are the Best Way to Fight a Cold 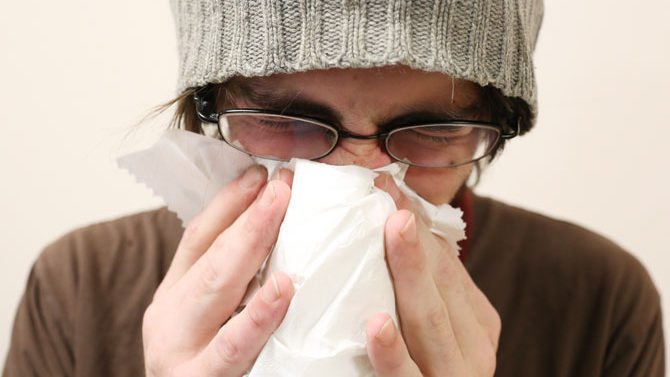 The warning signs start to creep up—sneezing, runny nose, sore throat and cough—and you know you’ve got the crud. You feel achy and gross, and you stock up on soup, over-the-counter medicine and vitamin C. When it’s cold season, everyone touts different remedies for what really works, but when you’re dealing with a virus, it’s probably here to stay for at least a week.

“We can send a man to the moon, but we can’t cure the common cold,” jokes Keith Zimmerman, a primary-care doctor with Athens Regional FirstCare.

At this time of year, Zimmerman is prepared to see sniffly children and workers who need a doctor’s note for an absence. “When I played piano for a local elementary school’s holiday performance, everyone was sniffing and snorting between the songs,” he says.

Despite the suggestions to take vitamin C and zinc, studies show that most remedies don’t really help you get better quicker. But a few medicines can ease your symptoms while your body takes a week to heal. Ibuprofen (Advil) or acetaminophen (Tylenol) tackle fevers and aches, and behind-the-counter decongestants pack the punch to open up your nose and start drainage. Zimmerman recommends a decongestant and antihistamine combination as the most effective strategy to breathe better and stop runny noses. One alone may not be enough. He also recommends nasal sprays, but tells patients only to use them on one nostril at bedtime and switch sides each night.

“I can’t sleep when I can’t breathe through my nose, and this option can help you to get some relief and rest,” he says. “The problem occurs when people use sprays too often after a few days.”

Some patients ask about herbal remedies, such as echinacea (the most commonly used botanical in the U.S.), which is tricky to answer. Studies show echinacea works in some cases, but the best remedies aren’t yet available in the U.S., says Jennifer Wares, one of the lead physicians at the University Health Center. After she joined the health center staff in 2011, she completed a two-year fellowship in integrative medicine, which focuses on the science of complementary or alternative medicine.

“With any herbal product, there are many ways to use the plant, and some work better than others,” Wares says. “Best to save your money and hold the echinacea until we know more.”

Another herbal called Pelargonium sidoides, known by its South African name Umckaloabo or the product name Viraclear, shows some effectiveness in scientific studies. You must take it within the first 48 hours of feeling sick, preferably in the first 24 hours, Wares says, and it shouldn’t be taken with blood thinners like Coumadin or warfarin. The University Health Center stocks Viraclear.

To help with dry mucus, consider using a saline spray or neti pot to moisten your sinuses. Sometimes a hot shower is just as good. If the symptoms don’t respond, and your fever climbs to 102, you should consider seeing a doctor. But sometimes a head cold is just that.

“You may have to put up with it for a week and a half, but most of us don’t want to do that,” Zimmerman says. “We start going to the doctor the day after we start getting sick, versus years ago when we didn’t go just because of a head cold.”

Unless you suspect that you’ve come down with a more severe illness, such as bronchitis or strep throat, don’t expect your doctor to write a prescription. Antibiotics can’t treat a cold, but patients often ask for them and become frustrated when doctors don’t want to hand over a script. “Antibiotic resistance on our planet is a massive problem with many causes,” Wares says. “It takes more time for a clinician to explain—and sometimes convince—a patient he or she doesn’t need an antibiotic than it does to just give the patient one.”

Due to resistance, some bacterial illnesses can no longer be treated. Plus, no new antibiotics are coming down the pipeline to help, she says. In some countries, for example, strains of gonorrhea, which are typically easily treated, are resistant to antibiotics. If your doctor says you have a cold and won’t hand over an antibiotic, don’t shop down the street to another clinic, Wares says. The second doctor may give in due to poor patient satisfaction, not because it’s the right choice.

“This problem is serious and should scare you and make you pause about taking an antibiotic,” she says. “We are having to undo a lot of damage done by medicine previously in which we created a culture of expectation of getting an antibiotic at every medical visit.”

Doctors now know more about how antibiotics affect your body, especially good gut bacteria that regulate your immune system and overall health. Since an antibiotic can’t pinpoint the bacteria you want to kill, it hits them all. The incidence of antibiotic-associated diarrhea, which happens when good gut bacteria is wiped out, is almost 10 percent. “If you went to a fast food place and knew that one in 11 people who ate there got diarrhea, would you go?” Wares says. “An antibiotic will not cure your cold, so why let it hurt your bowel bacteria?”

Zimmerman suspects part of the medicine-seeking trend is fueled by our overworked society and an increased need for doctor’s notes for work and school excuses. But on average, about 20–30 percent of people will still have some cough or congestion at 14 days, so be patient.

“If you’re coming to the doctor for an upper-respiratory illness, it’s nice when you can come in with an open mind,” Zimmerman says. “Let’s find out what’s going on and what we can do. Even in the 21st Century, we may not have a cure for everything, but you’ll get over the cold soon enough.”