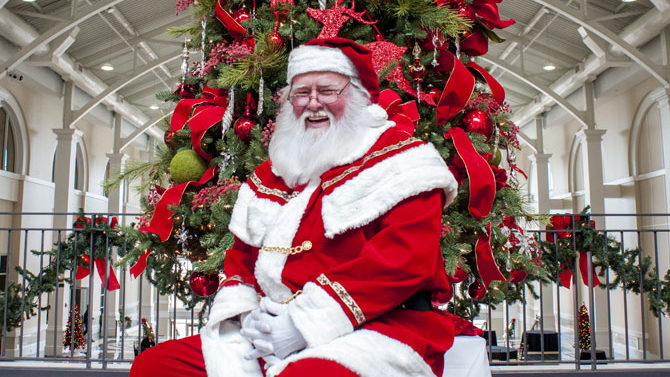 It takes more than rosy-red cheeks, twinkling eyes or a belly that shakes like a bowl full of jelly to be a Santa Claus. But if you had to boil Santa down to one thing, an authentic beard as white as snow is a must.

Morgan Edwards, the man who’s underneath the red-and-white suit for Christmas at The Classic Center, is a seven-year veteran when it comes to playing Kris Kringle. And the first thing you’ll notice about him is that he doesn’t have to strap on a fake beard; his is real.

“I played it some several years ago with a fake beard, but then I quit that,” Edwards says. “Kids got to really recognize me too much in the town that I worked [in].”

A day in the life of Santa is a busy one, especially when he’s out of his North Pole workshop. Edwards’ wife, Yvonne, says the official Santa season starts in early November, but with his authentic beard, he gets attention—at the gas pump, at restaurants, at the mall—all year long.

In getting ready for a day full of pictures, wish lists and sore knees, the first thing that comes is beard maintenance. Edwards says this can take anywhere from 30–45 minutes between blow-drying, conditioning and “white minx” color treatment. “I use some stuff on my hair to keep it from turning yellow,” he says. “Gray hair will oxidize and turn yellow every once in a while.”

His beard is nothing short of mesmerizing. When you lay eyes on Edwards, you’re immediately drawn to his beard. When Flagpole asks if he ever has problems with kids testing the legitimacy of his beard, he responds, “I have more trouble with women pulling on it than I do kids.”

The next step is suiting up. Edwards says he has three in the closet and has revamped the one he’s been using this year.

This Santa’s day job is cutting hair—his wife chimed in, “Everybody’s but his”—a couple days a week at a barbershop in Commerce, about 20 miles north of Athens.

His travels have taken him to daycare centers, churches and schools in Gainesville, Duluth, Athens and Winder. This year, so far, he’s done about 3,000 pictures in five days—approximately two or three pictures per kid.

“Somebody says, ‘What if they don’t pay you?’ Then don’t go back next year,” he says, laughing. “But I do, I go back.” Anyone can tell that Edwards has an inherent love for playing the role.

When it’s time for Santa to hear kids’ Christmas lists, “We generally tell them when they get in your lap—the photographer will tell them—‘Now y’all think of one thing.’ We haven’t got time to take a whole laundry list,” Edwards says. “Most of them do that, that’s all they’ll do is tell you one thing. And some of them can stand over there and talk to you and tell you what they want, they get on my knee they can’t tell you nothing. They get nervous. and they can’t say a word. They can’t think of anything.”

One of the most unusual requests he says he has received was from a four- or five-year-old boy, who wanted a real chainsaw. When Edwards double-checked with the child to make sure he wanted a real one and not a toy, the child responded, “No sir, I want a real one,” and then gave Santa directions to the local hardware store and told him they cost $250.

Another boy, when asked by Santa, “You been a good little boy?” dropped his head and said, “Yes, sir. I started yesterday.” Edwards says, “He got everything he wanted for being so honest.”

Despite having a few sad moments, being Santa is mostly filled with magical moments that will make you smile.

The Christmas at The Classic Center schedule also includes breakfast with Santa, displays of Christmas trees and professional bakers’ gingerbread houses, a holiday market, ice skating and performances of The Nutcracker.

Children also can have their pictures taken with Santa at Georgia Square Mall from 10 a.m.–9 p.m. (12 p.m.–6 p.m. Sundays) through Christmas Eve outside of Belk.