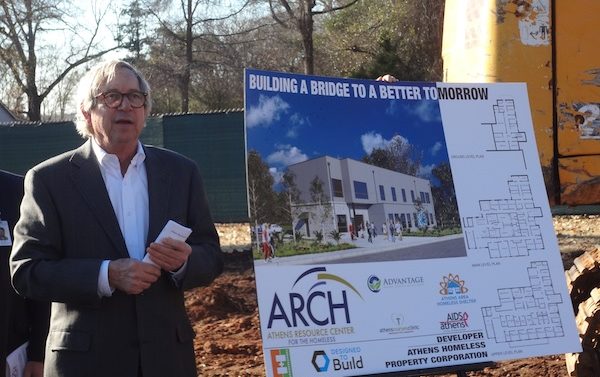 Athens-Clarke County government and nonprofit officials broke ground today on a $6 million resource center for the homeless that’s been almost 10 years in the making.

The Athens Resource Center for the Homeless (ARCH), often referred to as a “one stop shop,” will include a clinic, a day shelter with showers, washers, dryers, lockers and a kitchen, financial literacy classes, administrative offices, a daycare and 24 apartments to transition homeless families to permanent housing. Construction is scheduled to be finished in July.

Located on North Avenue, the complex is next door to other service providers like the state Department of Labor and Department of Family and Children Services, as well as on a bus line and within walking distance of a grocery store.

A coalition of local nonprofits—AIDS Athens, the Athens Area Homeless Shelter, Athens Nurses Clinic and Advantage Behavioral Health Systems—obtained funding for the project in 2007, when the University of Georgia took over the former Navy Supply Corps School property in Normaltown.

On the advice of a panel of retired military officers (the Base Closure and Realignment Commission, or BRAC), Congress voted in 2005 to move the Navy School to a naval base in Newport, RI.

Under federal law, educational institutions can obtain property on former military bases for free, and a Local Redevelopment Authority appointed by then-Mayor Heidi Davison accepted UGA’s proposal to convert the base into its Health Sciences Campus.

Federal law also requires that the transfer of surplus military property benefit the homeless, so as part of the deal, UGA contributed $7.9 million to the ARCH. $1.9 million is reserved for future maintenance. The agencies involved are funding their programs and services themselves.

The Place to Open in Five Star Day Space Downtown