Foster Families Are Needed to Take in Hundreds of Athens Children 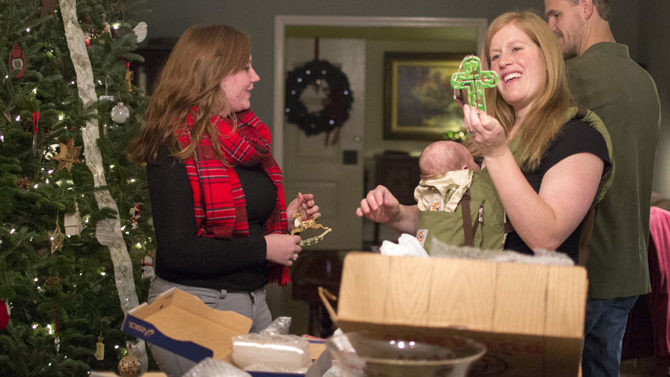 Since Lindsey Cavin became a foster parent last November, she’s hosted 10 children in her home. Some stayed for a few nights, some for a few weeks and others for a few months. No matter the length, Cavin thinks it made a difference.

“I knew there was a need in the community and wanted to help,” she says. “I wanted to make a positive impact in a kid’s life.”

Cavin, a social worker at Clarke Middle School, and her husband Aaron, a football coach at Clarke Central High School, had their first baby in October and believe they learned parenting skills while taking care of foster children.

“It’s quite incredible what impact you can have as a foster parent,”Lindsey Cavin says. “It’s not easy, and it’s not for everyone, but we’ve had some great kids stay in our home. Every kid improves when living in a consistent home where somebody cares about them.”

The Cavins provide one of 20 foster homes in Athens—a tenth of the actual need. More than 200 children in the area need a foster home. “It’s worth doing this for our community,” she says. “It’s difficult for children to be removed from their families and communities and have to live with strangers and new friends across the state in Augusta or Columbus.”

Children are removed from their families because of sexual abuse, physical abuse and crime. But most often, it’s because of neglect in homes hit by poverty, drug addiction or mental health issues.

Case workers at the Clarke County Division of Family and Children Services office are ramping up their efforts to recruit more foster parents in Athens and spread the word about ways community members can help. Brigette Love, for example, hosts orientation meetings each month to explain the requirements and process to become a foster parent. It’s a stress-free way for Athens residents to ask questions and learn about certification classes.

“People always seem shocked to hear about the need,” she says. “They’re also surprised about the different ways they can help.”

Families can apply to be full-time foster parents who host children for extended periods of time, or for short-term support, such as emergency moves between foster families or when a child must be removed from an abusive home in the middle of the night. Another group, respite families, provide support on occasional weekends to give foster parents a break. Others volunteer to babysit, transport children or, when a child moves to a new home suddenly, buy needed items such as clothes, diapers, bedding or school supplies. Volunteer court-appointed special advocates represent children in court and help them find safe homes. And those newly interested in the foster-care process can sponsor a child for the holidays by buying gifts through the Angel Tree Project.

“We want to connect with people who are interested in opening their homes, but you can still help if you can’t open your home,” Love says. “It’s helpful for the community in many ways to support the families and children in care.”

Love is ramping up recruitment, because so many Athens foster children must leave the county to join a foster family, especially siblings, teenagers and infants. When placing children with new families, Love wants them to have as many home connections as possible to keep their lives closer to normal. She’d rather keep siblings together than split them up and will often look to Madison or Walton counties to keep them close to Athens. Sometimes, though, this means siblings must move to homes in South Georgia.

Overall, the number of available foster homes in Athens has dropped steadily in recent years, Love says. “I think the economy has made it hard for families to care for themselves, let alone others,” she says. “I think it’s a combination of that and a lack of knowledge among those new to the area about the need and opportunities.”

Families may find fostering intimidating, too, and she wants to ease that hesitation. She started holding the orientation sessions this fall for residents in Athens, and she welcomes people from surrounding counties as well, particularly Barrow, Jackson, Madison, Oconee and Oglethorpe. “Some people only hear the few horror stories or tragedies,” she says. “We want to share the positive side, that it’s not only doable but also rewarding.”

The trend of fewer foster homes looks the same across the state, particularly in the northeast Georgia region. In the last five years, budget cuts led to a reduction in DFCS staff. With a healthier budget this year, Region 5 is focusing on development.

“We want communities to work together in a collaborative way,” says Mary Havick, the Region 5 Northeast Georgia DFCS director. “We learned this in the past few years and want it to be even more intentional in the future.”

Creating a stronger community of support around the child, foster parents and birth parents is key. In fact, the No. 1 indicator of reunification with birth parents—which is the ultimate goal of foster care—is visitation. That’s hard to do when people must travel to visit.

“The biggest challenge is to make sure we have enough foster homes locally,” Havick says. “When this community’s children must be placed in a different city, it’s emotionally and economically draining on the system and the people in it.”

Backsliding in the Recession

In 2000, several local children’s groups, Clarke County DFCS, schools, public health officials, law enforcement and court officials came together to look at the data about children in Athens. They wanted to develop a plan that would work across the different services provided in the community. They enacted several health and wellness reforms that made a dramatic difference for kids, says Tim Johnson, executive director of Family Connection-Communities in Schools of Athens. In the following few years, abuse and neglect cases in Clarke County dropped by 40 percent.

State officials began to take notice and enacted some of the same reforms in 2004. Abuse across the state dropped by about 40 percent as well. But as the recession hit, state lawmakers saw this as an area with less need and cut some funds. The same happened for the next few years.

“The perception was that foster care reduced and we didn’t need as many resources for it anymore,” Johnson says. “But really, we needed to redirect those resources into prevention and early intervention.”

Instead of addressing family issues before they became a crisis, such as through parenting or anger management classes, DFCS workers had to focus on immediate concerns. In many counties, this also meant no case workers could recruit or train more foster families. But this year, lawmakers increased funding for the first time in about a decade, and DFCS offices have been able to add 278 caseworkers statewide.

“It took awhile to get to this point where we have a dramatic shortage of foster homes, because people move out of the area or age out,” Johnson says. “They key is having adequate resources to train people who don’t even know about the need.”

Another hiccup set back DFCS offices this year, particularly in the Region 3 (Rome) and Region 5 (Athens) areas. Gov. Nathan Deal announced in April that the state would pilot a new privatized system for foster care and asked local officials to pause on recruitment activities. The pilot project came after Senate Bill 350, which would outsource foster care, failed to pass during the final hours of the legislative session. The public-private partnership would have freed up state funds for local DFCS offices to use for other initiatives, such as prevention, early intervention and reunification with families.

The Athens and Rome regions were picked as pilot locations based on the number of children who require placement outside of the region, the lack of local foster homes and transportation costs for long-distance placements. Near Athens, for example, about 40 percent of foster care children are placed outside of the 13-county area. In addition, the region has the third-highest transportation cost due to the number of children placed outside the region.

The pilot was slated to run from October–May. But in October, when the vendor was scheduled to be announced, the privatization process was suspended indefinitely.

Now, it’s up to the community to fill the gap, says ACC Juvenile Court Judge Robin Shearer, who heads Family Connection’s Safety and Community Stability Strategic Action Team. The team is looking for ways to publicize the need.

“There was a big lull in recruitment,” Shearer says. “Now that the pilot plan is no longer moving forward, the effort has gotten a new sense of urgency.”

For example, Georgia Department of Human Services officials began teaming with local agencies around the state this fall to discuss how the faith community can help vulnerable children. With more than 7,500 children in foster care and tens of thousands of churches statewide, one family per church could host a child with plenty to spare.

As part of a national initiative, several state leaders are working on the “Zero to Three” initiative, which encourages new early childhood policies. Related to foster care in particular, children from birth to age 3 should visit their birth parents three times a week. That’s tough to do when foster children can’t stay close to home.

“Young children need that bonding time,” Shearer says. “If that connection is broken, it becomes more difficult for children to go back home.”

In Athens, Lindsey and Aaron Cavin have watched some of their foster children return home. They still keep in touch with every kid who has stayed with them.

“With one family, we still talk to the dad, and he trusts us,” she says. “We hang out and go to church together. It’s a great dynamic and a positive relationship.”

But three sets of the Cavin’s foster children moved to another county. They lived in Athens initially to stay at their schools but then had to move to a more permanent location away from town.

“As both a professional and a foster parent, it’s hard to send these kids to another county,” Cavin says. “Now they’re forced to live with strangers and make new friends.”

Want to Be a Foster Parent?

Information sessions: Third Wednesday of every month in the Athens Area DFCS office at 284 North Avenue. The next meeting is 6 p.m. on Dec. 17.