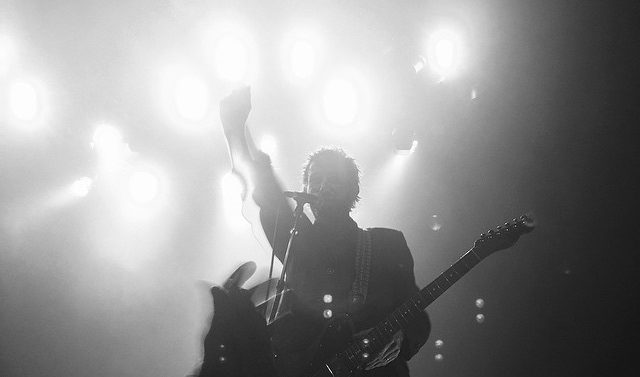 The sizeable crowd at the Georgia Theatre last Friday included more than a few highly regarded local musicians and music industry insiders, many of whom had been in the Classic City for decades. Both in quantity and quality, Centro-matic had a fine crowd for its final Athens show.

After inspired sets from Thayer Sarrano, who was joined by several other top-notch Athens musicians, and Dead Confederate, Centro-matic opened their set with “Members of the Show Them How’s It’s Done,” from the group’s 2000 LP, All The Falsest Hearts Can Try.

It was obvious from the get-go that the band was aware of the gravity of the occasion. “Captivate the audience just once/ Show ‘em how it’s done,” sang frontman Will Johnson. Just like that, the subtext was revealed to everyone in the room.

Johnson’s lyrics have always been rich with metaphors and abstractions, yet lines from songs took on new, almost concrete resonances given the occasion. When the band delivered “Estimate x 3,” from the near-perfect Candidate Waltz, it felt as though Centro-matic would play until sunrise: “In a customary way/ It’s what we have come to know/ The minutes stretched between us tight.”

Selections from the band’s recent and final album, Take Pride In Your Long Odds, were also featured prominently in the setlist. “Every Mission” nailed the group’s classic sound, Scott Danbom’s necessary multi-instrumentalism, Matt Pence’s clockwork drumming and Mark Hedman’s adept bass playing all accompanying Johnson’s gravelly voice and guitar. “Through The Fog, Then Down” was treated to a more somber arrangement, room for Danbom to showcase his consummate powers on keys.

Midway through the band’s set, Johnson mentioned Centro-matic’s “long-running love affair” with the town. The audience responded in kind, singing along with “The Mighty Midshipmen,” a longtime crowd-pleaser.

Closing the night with “Without You” from Love You Just The Same, Johnson and company seemingly held every note as long as they could, offering the affected audience a chance to linger on the song. “The battle is quite long/ We just can’t go on/ Without you,” sang Johnson. Rather than turn the show’s closing moments into some sort of apology for disbanding, Johnson raised a fist and thanked the crowd a final time.