A TAD Could Pay for the Downtown Master Plan 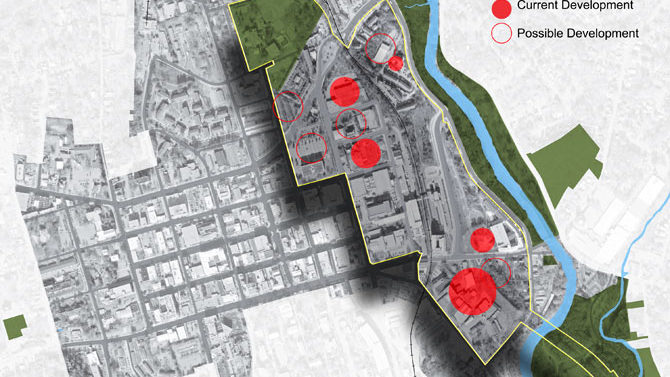 Once Athens-Clarke County officials approve a master plan for downtown Athens, the question becomes: How do we pay for it? The plan’s chief architect believes a tax allocation district (TAD) is the answer.

When a TAD is created, a baseline property value is established, and additional property taxes collected from new development in the district go toward infrastructure in that district. Cities can either pay as they go or sell bonds and use TAD revenue to pay them back.

Jack Crowley, a professor in the University of Georgia College of Environment and Design, has been working on a downtown master plan since 2012. The plan—set for Athens Downtown Development Authority approval in March—includes new parks and greenways, commuter rail, streetscape improvements and pedestrian paths, such as rebuilding the famous Murmur Trestle in Dudley Park as part of a rails-to-trails conversion from downtown running east.

The tax allocation district would cover the eastern part of downtown to the river.

Such projects cost money, and a TAD could raise up to $20 million, according to Crowley. It could also encourage diverse infill development in the eastern part of downtown, which is dominated by student apartments but still contains considerable vacant land.

Building those types of projects will stimulate the area and attract other private enterprises, Crowley says. Developers also would stand to benefit within a TAD because they would get public improvements more quickly. “You could negate your ability to do a TAD if the district is demonstrating that it’s already going to go by itself,” he says.

Sales tax revenue from the next SPLOST (which wouldn’t start before 2020) is another option, but a TAD would raise money faster, even if Athens-Clarke County doesn’t raise money up front through bonds. “If you don’t sell a bond, and you say, ‘When I get $5 million, I’m going to build this trestle,’ maybe it takes me two years… which is faster than the SPLOST,” Crowley says.

Tulsa—where Crowley also wrote the city’s downtown master plan—has five tax increment financing districts, or TIFs, which are identical to TADs. Atlanta has created 10 TADs, including one to redevelop an industrial brownfield into Atlantic Station and another to help fund the BeltLine, a 22-mile bike, pedestrian and light-rail corridor looping around the city.

ACC could have raised even more money had it approved a TAD last year, but property values for all the buildings under construction on the east side of downtown were reset Jan. 1, bringing down the amount of tax revenue that could be earmarked for infrastructure in the district. Crowley started asking the ADDA to recommend a TAD last June.

“Ultimately, it’s up to [the commission] to do any sort of tax district,” ADDA Chairman Bill Overend says. “All we can do is ask them nicely or give them lots of good information about why that would be a good idea. As a board, we don’t really have that information yet. We’re all really interested in it.”

Initially, when the Selig Enterprises development between Oconee and East Broad streets was still on the table, Mayor Nancy Denson said she couldn’t support a TAD. She echoed Crowley’s point that it would’ve been “counter-productive” to a project already on the books and ready to go.

But with the death of the Selig project and stores like Best Buy and Pier One moving from Atlanta Highway to Oconee County, Athens-Clarke County is facing an erosion of its existing tax base. “This tax allocation district may be needed to offset that [sales tax] loss,” Crowley says.

Since other development projects like the Hyatt Place hotel next to the Classic Center and apartments like The Standard, are still in the midst of construction, Crowley thinks the best time to establish the TAD is before Jan. 1 next year to capture extra taxes generated by those developments. That would require putting the TAD on the agenda during an election year, which may turn off voters who shy away from anything with the word “tax” in it, even though a TAD doesn’t involve raising taxes.

Because about 60 percent of local property taxes go to the Clarke County School District, the school board would have to approve a TAD along with the commission for the TAD to have its full impact. But that would mean potentially forgoing additional revenue from new development in the district for a period of years, although development generated by a TAD could boost school funding down the road.

School administrators have not taken a stand on a downtown TAD. “We would certainly have to review any proposals that would reduce revenues to schools, even temporarily. However, with that said, we have not been presented with any formal correspondence regarding a tax allocation district,” Superintendent Philip Lanoue says.

“It would not be unreasonable to expect the school [district] to opt into it,” Mayor Nancy Denson says.

Denson says she couldn’t support a “complete absolute TAD,” but portions of it. “It’s something we’ll have the work the details out on,” says Denson, adding that “this is like a 20 year plan, it’s not something we’ll adopt tomorrow.”

Mayoral candidate Tim Denson says a TAD is a useful tool for both economic and community development. “It’s a complex issue… but it’s something I’m definitely open to. I’m confident we could probably find a way for it to work, because these long-term plans are the kinds of things we need to be looking into,” he says. “I really feel like, recently in the last few years, everything we’ve been doing has been very short-term.”