Classic City Rollergirls Roll On in 2014 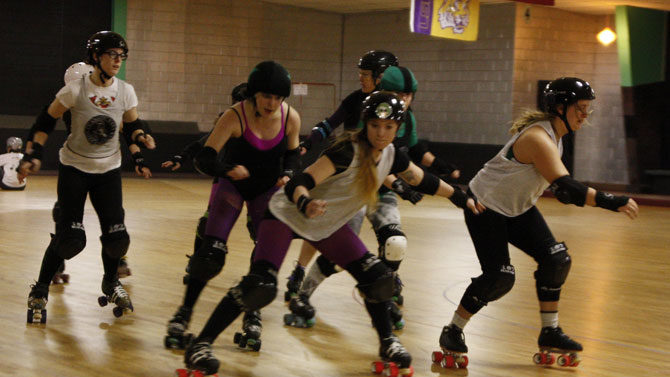 The athletes are fierce, the competition is spirited and home bouts are generally packed out with passionate fans (and always feature a full bar). Organized women’s roller derby has existed in Athens since 2006, but if this is all news to you, take heart, friends: There is plenty of room on the bandwagon.

The 2013 season was one of the most grueling yet also rewarding on record for the hometown Classic City Rollergirls, a member of the nationally recognized Women’s Flat Track Derby Association (WFTDA). Despite having to endure multiple injuries to key performers while navigating a difficult road schedule that included long-distance away bouts in Charlotte, Chattanooga and Tallahassee—and all without a full-time head coach—the scrappy squad still managed a very respectable 4–4 win-loss record.

“I think we had a great season,” says last year’s MVP and team captain Elizabeth Impaler, the longest-tenured CCRG veteran. “We held our own in most bouts, even against higher-caliber teams, and we improved our off-the-track commitment to fitness, which helps us take things seriously and be taken more seriously.” It was also the first season the team featured trading cards for each member of the roster, available for purchase at the merch table during bouts.

It’s important to remember that CCRG is a volunteer, unpaid army of women managing any combination of career, family and coursework who must also find time for thrice-weekly practices, nine monthly bouts and the plethora of community and civic-minded projects the Rollergirls are known to champion. A million millionaires speak of a love for the game every morning in the daily sports page. Here, it isn’t all lip service and public relations.

“For us, the offseason was one week with no practices, so I doubt we lost too much muscle,” says newly elected team captain Kattilac Coupe Devill, adding, “We are putting in work and staying hungry for 2014.”

Indeed, the upcoming CCRG season promises to be compelling for a number of reasons. For starters, the skaters now have a head coach (Orville Red’N’Blocker) and an assistant coach (Rock Steady). They’re also poised to become the first downtown sports franchise in recent memory when they kick off the 2014 season with the annual Green vs. Black intra-squad game Saturday at the Classic Center.

The move downtown is a huge step for CCRG, which has played the past few seasons at Athens Arena and whose humble home-bout beginnings can be traced to the former Skate-A-Round USA (presently Fun Galaxy) on the Eastside. “I’m definitely excited about the move to the Classic Center,” shares veteran blocker Lolli-MaeHamm. “The Arena will always have a place in our hearts, and we may hold some events there in the future, but we are very excited for the opportunity to accommodate more of our fans in such a convenient location.”

The most intriguing storyline to follow this season, and perhaps the one that best defines the budding legacy of this D.I.Y. group of girls on wheels, is roster attrition. The 2014 team will need to replace no less than seven skaters who saw significant track time last season, including talented and versatile veteran Hella Blitzgerald and 2013 team co-captain Mosh-ya Brady. Some skaters leave town. Some retire. Several bolt for the seemingly greener pastures of Atlanta, which boasts one of the perennially highest-ranked WFTDA clubs in the country.

“I have thought a lot about turnover,” says Devill. “I don’t really have a good answer for that yet. I feel like, the more competitive we become, the more we will be able to retain skaters. In a transient town like Athens, sometimes, if we’re lucky, we get a skater for four years. During the time that we have them, most players have to be built from scratch.”

Therein lies the unique challenge facing this outsider sport, which has only during the past 15 years enjoyed somewhat of a renaissance: Very few and maybe none of the athletes playing derby at this level today are the product of a massive youth movement. For most, roller derby didn’t exist in high school, and there was no intramural team in college. Many of the people you’ll find at a CCRG Boot Camp, where the team recruits, trains and evaluates newbies (the next camp begins Jan. 27), are learning to skate (or skate again) for the first time.

Naturally, that begs the question: How does this year’s incoming crop of would-be jammers, pivots and blockers look? Asked after a recent Monday night practice, fourth-year veteran skater Louis Strongarm says, “They show up. They do the exercises and activities. They put forth effort, and they’re excited.” MaeHamm agrees, gushing, “The newest bouting skaters that will be making their debut [this weekend] are seriously giving the veteran skaters a run for their money. Everyone is going to have to step up their game and work extra hard for a spot on the roster. It’s exciting to see CCRG growing in such a positive way. There’s so much potential for 2014.”

Longtime derby fans will undoubtedly follow CCRG this season, but with the increased seating capacity offered by the team’s new venue, there will also be plenty of room for the newly curious. Home bouts are scheduled for this Saturday, as well as Apr. 19, May 31, July 19 and Aug. 23. A portion of ticket proceeds, as always, will benefit a local nonprofit organization. This weekend, you can show your support for CCRG and the Multi-Agency Alliance for Children, a collaborative of eight nonprofit behavioral healthcare providers united to serve at-risk children and families in our area.

“CCRG definitely makes an effort to give back to the Athens community,” says MaeHamm. “Athens is so supportive of us, it’s the least we can do to say thanks.”

WHERE: The Classic Center