Five Georgia Breweries To Check Out in 2020 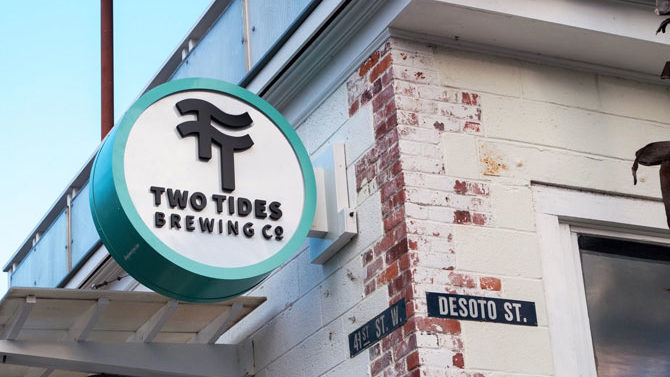 The beachy two-story house at 12 W. 41st St. has helped shape the Starland district into one of the most desirable neighborhoods in the Southeast. Home to Two Tides Brewing, a creative craft beer enterprise founded by James and Liz Massey, visitors can easily forget they’re not spending time in the living space of a (very clean and organized) friend (with great taste).

Unwind on the upstairs back porch with a snifter of Shadow People, an American Stout (7% ABV) waiting to be paired with a donut you smuggled in from Henny Penny, the totally darling and delicious bakery just blocks away. Or sit back and inhale the smells from Starland Yard, a cargo container food court next door, anchored by Pizzeria Vittoria Napoletana. Is this the best pizza in Georgia? OK, yes.

The Cherry-Berry Pie sour ale (5% ABV) is conditioned on massive amounts of cherry, blueberry and blackberry purée. Drink one while you fail miserably trying for a respectable score on the immaculately maintained Shaq Attack pinball machine, set for free play, in one of the home’s game rooms. On each visit to this cozy, coastal community brewery, I found six or more fresh IPAs on tap. Start with the flagship Sixfoot (6.3%), a hazy dream blending Citra, El Dorado and Mosaic hops into absolute tropical fruit bomb perfection.

The Bigfoot Field Researchers Organization is dedicated to professionally documenting, studying and investigating the Bigfoot phenomenon worldwide. There have been more reported sightings and experiences in White County than any other location in the state of Georgia.

I began my search for the ape-like legend at the 1,000-acre Yonah Preserve Trails park just outside of Cleveland. Sadly, there was no evidence of the mythological beast, though sharing a trail with mountain bikers shredding through narrow rhododendron thickets proved almost as frightening. The quest continued three miles away at Tantrum Brewing, the state’s first designated agritourism brewery, complete with a 30-barrel brewhouse, tasting room and hop farm nestled neatly in the North Georgia mountains.

In the shadow of Yonah Mountain, Jeeps from Atlanta pack the parking lot. Patrons converge on an aluminum building seemingly built moments before. Giant picnic tables, exposed industrial elements, slick modern light fixtures and stained tongue and groove-cut white oak ceilings create an inviting vibe, but unless it’s raining, you should really drink outside. Close your eyes and trust fall into an Adirondack chair with a snifter of the pumpkin-spiced Dunkelweiss (5.7% ABV), then soak in the majestic mountain panorama, or find a sunny patch, lie in the grassy meadow and pretend it’s spring break with Poems at Midnight, a sassy Berliner weisse (4.7% ABV) brewed with wild strawberries and pomegranate.

Perhaps in the spirit of Sasquatch, but probably not, the flagship IPA is called Folklore (6.4% ABV), and it checks all boxes. Slightly bitter and really juicy, like so many other beers in the genre, it’s begging for a Tropicalia comparison. Done.

“Ain’t no such things as halfway crooks,” with all due respect to Mobb Deep, is a paradoxical sentiment ready for retirement. Why? Because Halfway Crooks is real, as evidenced by the recently opened 10-barrel brewhouse, restaurant and special event space in the delightful south Atlanta neighborhood of Summerville.

Fall in love with the space immediately as you’re greeted in the foyer by a wall of WarGames-noir green video screens and trippy, impossible square tiles under your feet. The optical illusion flooring snakes around the small bar, a simple, shiny, elegant watering hole with vintage tile backsplash and a pleasant crew manning the taps. On a recent evening, the tiny kitchen was hosting a curry soup pop-up courtesy of Talat Market. Brilliant.

Craft beer enthusiasts Shawn Bainbridge and Joran Van Ginderachter (ex-Three Taverns) collaborate on new takes of classic and underground European styles, and the result is exceptional. A little bamboo bowl of seasoned fried peanuts with crispy Thai basil is the perfect compliment to your new BFF, Velo, an old world table beer (3.8% ABV) brewed with pilsner malt, spelt, fresh Continental hops and 10-year-aged whole cone hops. Is this the most sophisticated and agreeable light beer ever brewed? Does it taste better on the rooftop patio with great views of the Atlanta skyline? Probably. Active Low, a German-style pilsner (4.9% ABV), is thoughtful and nuanced in a genre that generally isn’t. Yes, there is an American pale ale, Digital Being (4.5% ABV), and it features the winning combination of Citra, Amarillo, Mosaic and Simcoe hops.

According to statistics furnished by the U.S. Census Bureau, Roswell is the eighth most populated city in the state. According to assumptions supported by the eyeball test, it’s a rich AF, tidy bedroom community for young urban professionals that would prefer to not live, Tomahawk Chop, drink craft beer or send their kids to school inside the perimeter. Just off Canton Street, the main thoroughfare cutting through an idyllic downtown dotted with antique shops, law offices, olive oil stores and really expensive restaurants, you’ll find the man cave yin to Roswell’s Norman Rockwell yang, Gate City Brewing. Not so much a work in progress as something assembled in haste without overthinking any detail or hiring too many design experts, the brewery has decided to let the beer take center stage. And the beer is really good.

The Awe Juice IPA (5.9%) offers a bounty of fun tropical fruit on the nose, then finishes dry. It’s one of the best pale ales in the state, and the most interesting thing to call Roswell home since David Cross. Exceeding every expectation and then some, Gourd Vibrations, a chocolate pumpkin porter (7.8% ABV), is rich and syrupy without a trace of the unwelcome alcohol bite one might expect at this ABV. This is the beer to spend your next snow day with.

To be fair, even the most passionate and informed Georgia craft beer connoisseur can be forgiven for having never heard of Athentic. As of press time, it’s still a construction site. The bones are there, though, and with a few finishing touches to flesh out, the modern, masculine, minimalist space is poised to become Normaltown’s first nanobrewery in early 2020.

Athentic has been selectively making its beer available for a while, as local brewpub Akademia Brewing Co. has provided the upstart space to brew, plenty of advice and access to its distribution channel. Longtime homebrewers and career scientists Paul Skinner and Mark Johnson, attracted to and inspired by that spirited ethos, founded Athentic to celebrate their love for Athens, craft beer and beer people.

Beer people will be thankful they did after experiencing a cold Burst of Joy, the bright, kettle soured gose (4.6% ABV) with lemon and orange. When Square One Fish Co. has it on tap, do not hesitate to pair with briney Gulf Coast oysters.

Showcasing a blend of Citra, Cascade and Centennial hops, Sister Golden Hair is a balanced and approachable IPA (5.8% ABV) that might win over drinkers who tend to avoid the more bitter, way hoppier monsters of the genre. Save space in your beer schedule for at least a small pour of My Naughty Little Pet, an inviting Scotch ale just begging for sub-zero temps, a bear rug and a cozy fireplace.