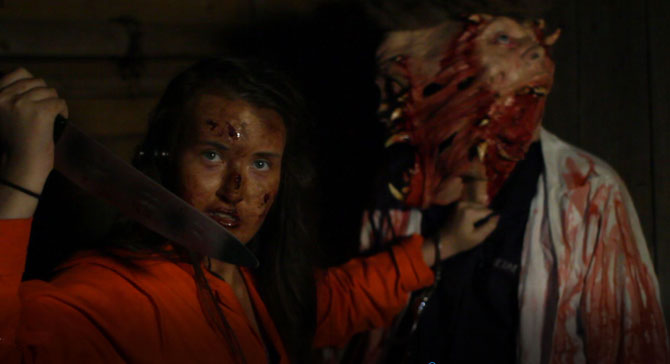 Looking for a spooky spot to take the family (or just yourself, you brave soul) in order to really get into the Halloween spirit? Here are five haunted attractions within easy driving distance from Athens. Go with God, and watch for ghouls.

Morton Theatre: More than 100 years ago, the Morton Theatre, at the intersection of Hull and Washington streets in downtown Athens, was arguably the most successful and celebrated African-American vaudeville theatre in the country. It was a tremendous point of pride for the community, and in addition to hosting performances from countless legendary entertainers, the space also housed assorted businesses, including a diner, pharmacy and mortuary.

The once bustling cultural and commercial hub of our city’s historic Hot Corner is now the forever home to at least a half-dozen friendly ghosts. Seriously: The six-page report furnished by Lawrenceville-based Ghosts of Georgia Paranormal Investigations, after Athens-Clarke County commissioned a 2014 examination into otherworldly occurrences in the historic building, is a matter of public record.

When you’re picking up tickets to next month’s production of The King and I, inside the box office, peep the pic local photographer Asher Hill donated to the Morton some 20 years ago. Notice the apparition in the white tuxedo?

According to Athens Creative Theatre program specialist and psychic detective Terry Powell, the well-dressed poltergeist is one of several mild-mannered characters politely haunting the Morton. There’s a prop boy running to and fro in the upper balcony, a stagehand methodically operating an old panel board offstage, a middle-aged male patron frustrated by an obstructed view and others. Powell believes the Morton was a special place for these spirits during their living years and is a comfortable spot to be stuck between dimensions.

Netherworld: Netherworld is a 60,000-square-foot strip mall space in Stone Mountain showcasing the wildly disturbed imaginations of Lovecraft, Poe, the ancient Greeks, a host of other literary giants and some bona fide freaks.

This is a world-class production, one of the premier haunted houses in the industry. Now in its 23rd year of totally scaring the crap out of metro Atlanta, Netherworld has grown to employ roughly 350 live actors, ticket takers, engineers and other employees who develop unique horrifying themes, and thus build new haunts, annually. Unlike your friendly neighborhood Halloween costume store pop-up, Netherworld is a year-round endeavor.

Noticeably absent from the scare tactics: Freddy, Jason, Leatherface and any leading man of Hollywood horror. No Michael Myers. No Pinhead. That’s by design, as concept founder Bob Armstrong has always preferred monsters, mythology and the supernatural over examples of maniacal antagonists doing horrific things to other people.

This year’s iteration is breathtaking, featuring an almost half-mile slog through a secret city of angry gorgons living under a mountain, then into an urgent apocalyptic situation involving genetically enhanced, weaponized reptiles.

The Bleeding House: In the southwest Atlanta neighborhood formerly known as Westview Heights, residents are preparing to prevent gentrification. The working-class area has recently rebranded itself as Justus—as in just us—to demonstrate solidarity, and unscrupulous real estate opportunists should take note.

One home that should absolutely be protected against property flippers: the Bleeding House on Fountain Drive. This modest single-story brick home sits on a postage stamp corner lot, a craggy cypress tree grows sideways in the front yard, and there is no doorbell. On Sept. 8, 1987, longtime residents William Winston and wife Minnie discovered what was positively identified as human blood in four of their home’s six rooms. It ran down the walls and came up through floors. Hoax? Homicide? No body or source was ever discovered. Police could never explain how the blood arrived in the home.

The current next door neighbor, Corey, a lifetime resident of the neighborhood, recalls the Bleeding House getting a lot of attention from curious folks years ago, but “things died down, and the house sat empty for about eight to 10 years.” He also mentioned that the 1987 incident probably wasn’t isolated. Neighborhood gossip suggests the Winstons experienced these bloody episodes on several occasions, but were uncomfortable with the attention they were receiving and the lack of any explanation from law enforcement.

The house’s current residents, recent transplants from Philadelphia, have been living there since 2017 and were unaware of its storied past. Thankfully, they haven’t had a single paranormal experience.

Bradley Lock and Key Shop: This list could easily be composed exclusively of places in Savannah with paranormal reputations. It is, after all, the most haunted city in America. The Sorrel Weed House, Bonaventure Cemetery and Moon River Brewing Co. are some of the most hair-raising, spine-chilling places on the planet. If you’re looking for ghosts, chances are you’ll find them there.

But if you’re looking for famous ghosts, visit Bradley Lock and Key Shop downtown. The oldest locksmith in the state has been family-run since opening its doors in 1883. These days, Bradley’s can be proud of a 4.5-star rating on Yelp, low prices, courteous customer service and a reputation for being home to the ghost of famed illusionist and escape artist Harry Houdini.

Spend a couple bucks to get a key made, and maybe have a supernatural experience with the most famous magician ever. If you’re feeling especially brave, attend one of the occasional seances hosted by the Bradley family in the building, with the hope of contacting Houdini. Or, you could just live there. The top floor of Bradley’s is a (lucky) 13-room boarding house with a long history of being “totally haunted, but fun,” according to a former resident who didn’t wish to be identified.

Zombie Farms: The quaint hamlet of Winterville represents the perfect slice of Americana for 11 months out of every year. Every October, Zombie Farms interrupts the peace and tranquility with a terrifying after-dark experience in a witch-haunted forest.

The SCP Foundation, under the guidance of Dr. Hammerstein, a demented scientist ready to harness supernatural powers for malicious purposes, has been tasked with the responsibility of securing, containing and protecting the woods. Zombie Farms patrons unwittingly participate in the process as Class D personnel with low-level security clearances. Despite the fancy lanyards hanging from their necks, Class D personnel are, in fact, “expendable and can be used to handle extremely hazardous anomalies.”

After a creepy school bus ride deep into the Witch of Winterville’s stomping grounds, Class D personnel are briefed in detail on the situation by a bearded old man who probably taped every “Coast to Coast” broadcast for reference and posterity. The shadowy figure eloquently rambles on about Area 51, Bob Lazar, the Fountain of Youth and sophisticated, alien-designed 3D printers.

Armed with this useful information, patrons are asked to repeat, more than a half dozen times, the SCP Foundation motto, “We die in the dark so that others can live in the light,” before embarking on a three-quarter-mile hike through terrifying terrain crawling with zombies.

Because this is Athens, where everyone needs two or three jobs to make ends meet and everybody knows everybody else, the fear factor at Zombie Farms is somewhat tempered. It’s not so scary running into a monster who is also the barista that served you yesterday, a guy in that badass local rock band or your favorite Classic City Rollergirl. Still, there is comfort in familiarity, especially during stressful catastrophic events.