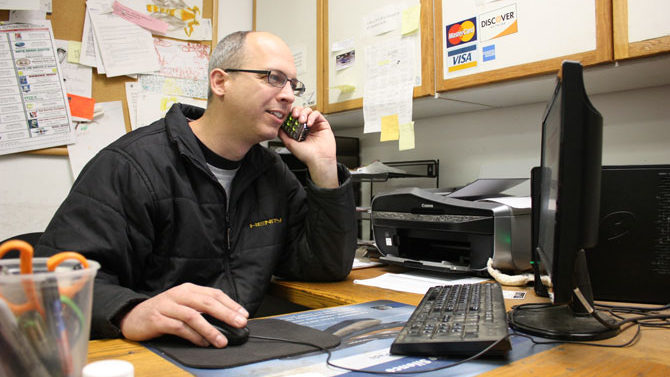 It was time for Henry Mutimer to renew his health insurance a few months ago, but he let it lapse because the Affordable Care Act marketplace exchange was coming.

He tried to log into healthcare.gov on the first day, but it didn’t work. He tried the next day and the next. After three weeks of trying each day, he finally got through the system.

“I was a little distressed at the quantity of personal information required,” says Mutimer, service manager at Superior Car Care in Athens. “They know your favorite flavor of ice cream by the time you’re done.”

Once he submitted his health and income information, Mutimer priced the plans available to him. Now over age 30, he doesn’t qualify for the cheapest catastrophic care option. The bronze plan, an option with a $5,000 deductible, costs more than twice as much as his previous insurance. “So I didn’t sign up at that time,” he says. “I’m trying to determine if I’m going to pay the penalty.”

Mutimer feels like he’s left with few options, and he must “play it safe” as he works while uninsured. “I liked my old insurance, but it didn’t meet ACA guidelines,” he says. “And I don’t qualify for a subsidy.”

Plenty of Athens residents are echoing similar sentiments as they consider health insurance options for the future. When the federal exchange website went live on Oct. 1 and stalled day after day, social media comments shifted from anger to sarcasm to disillusionment. Though the site has improved, it’s still slow and has glitches. The Spanish-language site has been delayed indefinitely.

Harold Weber is one of two local ACA navigators, experts whose job is to help people navigate the exchanges. He checks the website each day when he arrives at his Athens Neighborhood Health Center office. “It’s key as far as enrolling people quickly,” he says. “Right now we’re telling people to wait and be patient, but as soon as we can, we’ll have them lined up and ready to sign up.”

Weber, an Athens resident who worked in the health insurance and health IT industries for 30 years, sees the hiccups in the technology infrastructure and thinks it’s probable the site will be ready soon.
As part of the most recent updates, the site’s web team added a new software release on Nov. 5 that included dozens of changes focused on the user experience. By Nov. 13, the team added two large-scale data storage units to “alleviate pressure” on the site. Performance teams created in early November will identify, prioritize and fix specific software issues and plan multiple software releases per week to address problems, the site’s blog reported Nov. 12.

As part of the online marketplace, individuals and families can compare plans, determine if they are eligible for subsidies or tax credits and purchase health insurance coverage that will go into effect in 2014. Four tiers of plans—bronze, silver, gold and platinum—have different premiums based on the deductibles and co-pays required. For example, a platinum plan covers 90 percent of medical expenses, while a bronze plan covers 60 percent.

All those plans must offer 10 “essential” health benefits, including ambulatory (or walk-in) services, emergency services, hospitalization, maternity and newborn care, mental health and substance use services, drug coverage, rehabilitative services, laboratory tests, preventive and wellness management and pediatric services. In addition, those who can demonstrate problems affording a bronze plan can buy a catastrophic plan, but it doesn’t include tax subsidies to reduce the premiums.

“We’re talking to people and educating them with the hopes that when they come back to sign up, it’ll go fast,” Weber says. “If we can help them know what they want to do, they’ll zip right through it.”

Weber and Taylor Pass, another Athens navigator, are licensed by both the state and federal governments to help residents with insurance questions. They’ve traveled around the Northeast Georgia area since August to give presentations to groups and address questions. In the next month, they’ll hit Madison, Bethlehem, Siloam, Winder, Tucker and several Athens locations.

“Those coming to the presentations are starved for accurate information,” Weber says. “They tend to be highly emotional and descriptive about how Obamacare is bad for business, and then they settle down and ask me to tell them the facts.”

After a recent presentation to a church group in Monroe, two attendees approached Weber and asked for additional information to take back to their home churches. In the past few weeks, several Athens residents have approached Weber in coffee shops in town to ask him to present to community groups. This is the ideal scenario, Weber says—for his presentations to encourage others to spread the word to their community groups. California has hired 30,000 navigators, but Georgia has a mere 100 and will need more help.

“That’s the way this will fly in this state,” he says. “There’s no way 100 of us can enroll everyone ourselves. That’s a drop in the bucket.”

Weber is also in touch with Casa de Amistad in Athens to arrange a Spanish-language presentation with trained volunteers. “I’ve ordered Spanish materials, and those are on backorder nationally,” he says. “But we’ve got a Spanish version of the slideshow and a handful of materials. We’ve got to do something to inform all aspects of our community.”

Most of all, as a former health insurance businessman, Weber wants Athens residents to understand ACA changes. As a country, the U.S. pays 18 percent of its gross domestic product for health care, far outpacing European nations and Japan. Though Americans spend more than twice as much on health care as people in comparable industrialized nations, the U.S. still falls below at least 25 other countries in health outcomes, according to the World Health Organization.

“We’re not getting anything for that extra $1 trillion we pay,” Weber says. “That’s a bad deal. We must close that gap.”

Weber compares the new marketplace system to buying a car. Though consumers must choose from many makes, models, colors and accessories, they research and buy cars online every day. “It may seem complicated, but if you do it once or twice, it becomes old hat,” he says. “This system is going to happen. We must fundamentally change the way health care is delivered in the U.S.”

Changes brought about by the ACA will take time, he says. Navigators hope to enroll 7 million people in the health insurance exchanges by the end of March. “I know what it’s like to ramp up large clients, and this is bigger than anything I’ve ever done,” Weber says. “It’s a five-year ramp-up at least.”

Secretary of Health and Human Services Kathleen Sebelius announced Nov. 13 that just 26,794 people signed up for insurance during the first month of enrollment on the federal exchange—much fewer than officials first estimated. Another 79,391 people signed up on state-run exchanges in the 14 states that set up their own websites.

Georgia, however, is not among them. State Insurance Commissioner Ralph Hudgens, who has said he is doing “everything in [his] power to be an obstructionist,” opted not to set up a state-run exchange. In Georgia, 1,390 people managed to sign up on the overtaxed federal site.

For Jami Mays, the frustration lies in waiting for an answer. Since Oct. 1, she’s attempted to weigh her options and take a next step. She tried six different usernames and retyped her application information several times, and she still faces an error message: The verification system is down.
“I still have not officially submitted anything,” she says. “It’s frustrating, but at the same time, I get it.”

Mays, a self-employed Athens resident who chose to remain uninsured the past four years, is optimistic about the changes that will come eventually. “If they get the technology right and the website begins to process applications easily, I think everybody will realize how great it is and begin to get on board,” she says. “I feel like we’re right there.”

Mays says her frustration extends to the fact that Georgia has yet to expand Medicaid or implement a state exchange, so she’s competing on a national level for website access. Gov. Nathan Deal is opposed to Medicaid expansion, saying it would cost the state too much, even though the federal government would pick up almost the entire tab, and expansion would insure hundreds of thousands of Georgians, help hospitals struggling to provide charity care and pump billions of dollars into the state’s economy.

At the end of October, the Georgia Hospital Association and the Medical Association of Georgia—both major lobbying powers under the Gold Dome—joined the Georgia Rural Health Association and Georgia Alliance of Community Hospitals in urging state lawmakers to approve the expansion. On Nov. 6, a state Senate committee looked at compromise proposals that other states have tried, but committee members said the plans don’t fit well with Georgia’s population needs.

“I think it’s to the point where it’s going to happen with Medicaid,” Mays says. “But on my end, if I can’t get on the site by Thanksgiving, I’m going to call up and do this over the phone.”

Recently married in March, Mays is hesitant to join her husband’s insurance, which he pays for out-of-pocket as an Athens chef. Though the couple would like to have a child, they’ve decided to wait until their insurance situation settles first. “It’s frustrating to feel like you can’t live the life you want to live because you can’t pay a hospital bill,” she says. “But I still think any insurance plan would be better than no plan at this point.”

Like Mays, Mutimer is waiting to decide his next steps. An avid follower of news and politics, he’s worried ACA won’t address the larger problem of health care costs in America.

“Right now, the majority of people who will benefit have pre-existing conditions and Medicaid, and few healthy people have signed up on the exchange to offset those costs,” he says. “I’m not an economist, but I would say this could have been predicted.”

Mays is also listening to friends who have health insurance through local and national employers. Their health plan costs are increasing as well. “This is happening regardless of ACA, and a narrow band of people are really being affected,” he says. “The folks like me in the working lower and middle class are the people getting [hurt].”