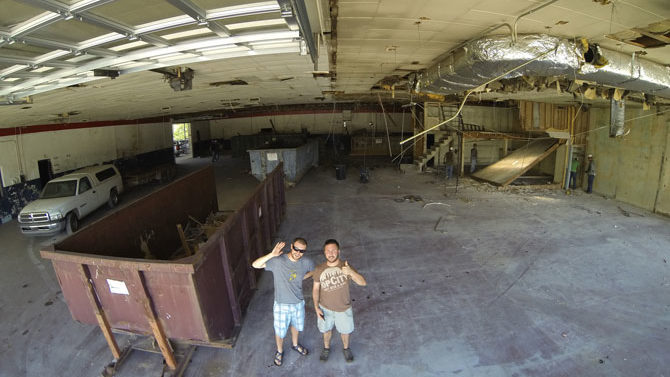 Adam Beauchamp and David Stein say their much anticipated downtown brewery, Creature Comforts, is progressing. While they had initially set their start-up date in August, both Beauchamp and Stein admit that was overly optimistic; opening a brewery takes a bit longer than they had anticipated. Contributing factors include drawing up plans, obtaining permits, ordering equipment and sourcing ingredients. However, Stein says he is “happy to say that everything is moving forward smoothly and as quickly as possible.”

Beauchamp and Stein, along with brewers Blake Tyers and Paul Vaughn, plan to be brewing in the former Snow Tire building on Hancock Avenue by late December or early January. Though delayed, interior demolition is underway. Oneta Woodworks will incorporate all the wood in the building into two bar areas that will be used during tour hours.

Beauchamp and Stein plan on opening the brewery to the public for tours five evenings a week. The public area will feature two bars, cocktail tables and a rooftop patio. Beauchamp and Stein say they want to challenge the typical notion of what a brewery tour experience—standing in lines waiting for another beer sample—is like. Cocktail tables with servers will help eliminate lines, as will a venue capacity limited to 300.

Creature Comforts plans a four-beer core line along with four rotating seasonals and several specialty brews and limited releases. The core line will consist of a European-style, cold-fermented pilsner, an India Pale Ale, an oaked rye amber brewed with 25 percent rye malt and aged in French oak barrels and a Berliner Weisse, a tart German-style wheat beer. All four core beers will be released in cans and kegs, though they will be on draft only for the first two or three months. Beauchamp and Stein also plan to release their four seasonal brews—a saison, a porter, another IPA and a stout—in cans as well, though specialty and limited releases will most likely come in 22-ounce bottles. They also plan taproom-only releases they think will generate tour business.

While Beauchamp and Stein are keeping their specialty and limited-release brews under wraps for the time being, they say they want to focus on sour beers, a style that’s not seen too often. The focus on sour or tart beers stems in part from brewer Paul Vaughn and Beauchamp’s background at Atlanta’s Sweetwater Brewing Co. Vaughn specializes in unusual Belgian beers, such as beers that are barrel-aged, brewed with wild yeast or are spontaneously fermented.

Blake Tyers, a University of Georgia alumnus and homebrewer, is also a brewer for Creature Comforts. Beauchamp says he wants the brewers to homebrew as much as possible and plans on having a creativity lab for the brewers, to encourage collaborative brews rather than recipes created only by the master brewers.

Creature Comforts will have a strong presence and visibility by being located downtown and will help feed the downtown economy when tours let out every day, according to the founders. The Snow Tire building is the “best location for a brewery in the Southeast,” Stein says. He and Beauchamp say they want to support their neighbors and contribute to the growing craft beer scene in Athens, not take away from established businesses or those yet to come.