Like the Iron Horse, UGA Is Moving the Red Barn to Oconee County 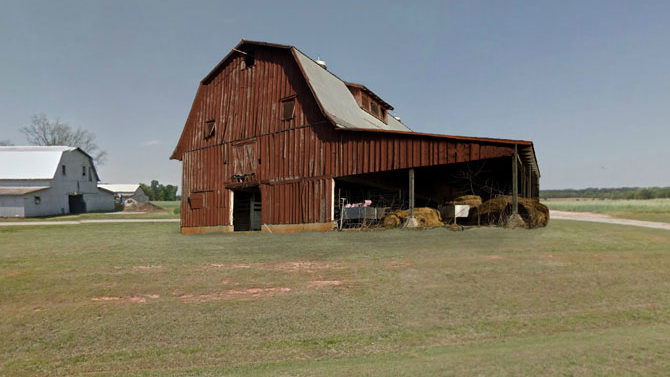 What do the University of Georgia’s Red Barn and the Iron Horse have in common? They’re both iconic pieces of the university’s history that were moved away from the middle of campus and now are in private hands.

The modernist Iron Horse—unveiled in front of Reed Hall on May 25, 1954 by visiting professor and sculptor Abbott Pattison—was moved within a day because of its unpopularity among students and is now located on alumnus Jack Curtis’ farm off Highway 15 in Greene County.

Though the Iron Horse was put out to Curtis’s pasture in 1959, it remains the property of the university to this day. In the ‘60s, before downtown provided the diversions it does now, students used to tip the horse over; this was remedied in the mid-‘60s, when Curtis had it mounted on a concrete slab to stabilize and protect it.

The Iron Horse may be even more iconic due to the story behind the controversy surrounding it. In any case, without the support of a private patron like Curtis, who watched Abbott sculpt the horse, this piece of UGA history would be lost. Occasionally, private patrons are needed to step in and assist the university in preservation efforts. Like the Iron Horse, though far less controversial, UGA’s Red Barn was deemed an eyesore and moved.

The Red Barn was built in 1915 and housed mules used by crop researchers. With its gambrel roof and red paint, it is more indicative of a Midwestern or Northern-style barn than Southern. In 1996, the barn was slated for demolition in order to build an alumni center on its site at the Intramural Fields. (Some argue that it was moved because it was a source of embarrassment for a university that wanted to establish itself as a major research institution.) Preservationists around Athens and in the College of Agriculture fought to save the barn from demolition and won. The university decided to move it to a remote location on South Milledge Avenue; the plan was to cut the building into two pieces and move it via the Loop. State highway officials wouldn’t allow it, so the barn was cut into four pieces and moved on county roads in February 1997.

The cost of the move and stabilization of the barn—which consisted of placing it on a concrete slab and repairing the roof—was $175,000. A sizable barn, 34 feet tall by 36 feet wide and 120 feet long, it could have served as a sports complex or alumni center, but repair costs have always proved prohibitive, especially after a storm in 2009 tore off part of the roof and siding. UGA has been criticized for letting this historic structure fall into disrepair over the years, but in a time of rising tuition and shrinking budgets, rehabilitating an unused, unhistoric barn on the hinterland of campus was not deemed the best course of action for the university.

Over the years, several third-party groups have stepped forward, proposing to relocate the Red Barn. At one point, the Oconee County chapter of the Daughters of the American Revolution wanted to move the barn and turn it into a museum and genealogical research center, but those plans never came to fruition. After the 2009 storm, UGA began looking in earnest for an outside donor who would be able to relocate and rehabilitate the barn—and in March, they found Tony Townley. He’s executive vice president of Zaxby’s, and he plans on relocating the Red Barn to land in Oconee County he purchased from UGA earlier this year. Townley says he has always been interested in historic barns, and especially this one because of its symbolic value.

The land, near North Oconee High School, was land that Townley’s family had owned several generations ago before selling it to UGA. Tom Jackson, vice president for public affairs, says he is glad Townley stepped in to “preserve it and put it back in an agricultural setting.”

According to Townley, the barn needs extensive rehabilitation, but he is confident he will be able to save the majority of the original structure. He is not yet sure what he will use the historic barn for—possibly to store antique cars and tractors or maybe as an event space.

Who knows, in a few years the Red Barn in its new location may become the off-campus icon that the Iron Horse is today, marking a gateway into the Athens area.